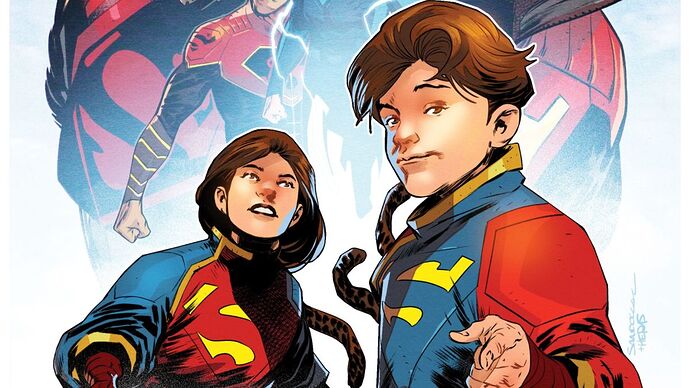 It looks good but it should probably be more traditional minus the skirt because while I don’t mind it, supergirl don’t need it. Or rather I should say superwoman. Tom King did write in that miniseries Supergirl: Woman of tomorrow that she will gain a new mantle but it seems left in the air whether Phillip Kennedy Johnson will go in a new direction.

I’m a sucker for anything Dan Jurgens does with the super-titles and I’ve always preferred Jon’s adventures when he was a boy. Aging him up never made sense; we had something similar with Chris Kent in the Post- Infinite Crisis/New Earth/New Krypton era—not exactly the same but close.

But here, they give us young Jon stories while still keeping older Jon around. This way everyone’s happy. And it’s Dan Jurgens, so you can’t go wrong there.

Lot of cool stuff coming down the pike.

Very glad to see Dan Jurgens back on Big Blue.

That’ll be great but unfortunately it might be too late to walk back.

You got him featured as a team member in the new Justice League and the whole boyfriend thing might complicate things.
Unfortunately, we can’t go back now.

John Henry Irons seems missing in the variant covers for action 1051 so I hope he did not die in action 1050.

Agreed. I think it’s too late to de-age him now. Adult Jon has a lot of fans. And I’m happy for them they get to keep their Jon. We weren’t so lucky when Bendis decided to make him older. But out of all the possible scenarios, this is the best one. If you like older Jon, you can read his continuing adventures. If you like Jon as a kid, you can get step back in time as Jurgens tells new stories.

And from what I’ve read about what’s coming up, it seems this is a perfect jumping on point for me to get back into the super-titles on a regular basis.

If want a younger superboy, can maybe let Lois and Clark have a 2nd son like in the tv show. There are plenty of kryptonian kids like lor zod, from kandor, from the phaelosians, and now we also have super twins.

This all looks so good! Hopefully they will announce some supergirl minis in the future as well and I hope that Steel, both iterations of the character, can shine in the new Action format they’re going for. I wonder how many pages it is going to be and what price point they’re going to go for.

I’m pretty sure that “the twins” are Otho and Osul, the Phaelosian siblings that Superman recently rescued from Warworld. It looks like Kal and Lois will adopt them.

Agreed. I think it’s too late to de-age him now.

Meh, its never too late for that

First off, I gotta say: those new costumes are freaking FANTASTIC. Not a loss in with any character, and I’m honestly kind of bummed out that Clark isn’t joining in on the new costume. Like, we see several version of how you can do a red and blue costume without those blasted eyesores that are the trunks, let them go already!

Anyway, onto the books. First off, glad to see that Phillip Kennedy Johnson is basically spearheading the Superman line. That said, I don’t know if I understand what they mean by Action Comics being reformated. Does that mean it’s a bigger book, like a 100-page anthology book? This article doesn’t give any concrete details on that front.

The Lois and Clark sequel doesn’t appeal much to me, mostly because I find Jurgens kind of boring as a writer and kid Jon even more so. I know I’m pretty much alone on this island, but I was actually happy to see Jon aged up because kid Jon just felt like the Cousin Oliver of the DCU at that time.

Meanwhile, I am SO FREAKING HAPPY to see Power Girl get her own story again and I’m really excited about the creative team for it. I’ve really loved Leah Williams’ work on X-Factor and especially X-Terminators and if she brings even some of that energy to it, it’s going to be a highlight of that book.

Adventures of Superman: Jon Kent looks interesting. I’ve liked Son of Kal-El well enough, though I feel like the Bendix story just ran for WAY too long. Honestly, giving Tom a hard limit of six issues to tell the story is probably going to help. Factor in the curious twist of him possibly having the Electric Blue powers, facing off aginst Ultraman (which I’m only slightly annoyed because that was a dream story I wanted to write for the character one day) and bringing in Val-Zod again, this could be a really fun book.

Finally, Joshua Williamson on the big Superman book is a good fit, and that art team of Jamal Cambell and Nick Dragotta is amazing. It’s hard to say much else without knowing what the plot is, but with that creative team, I’m definitely curious.

Also, saw this online and thought it was hilarious: 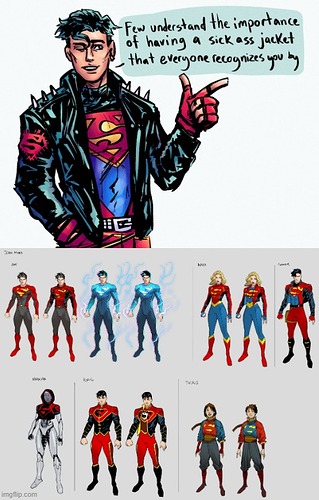 Like, we see several version of how you can do a red and blue costume without those blasted eyesores that are the trunks, let them go already!

I agree with most of your other points though. What’s nice about this new approach is that it seems there’s a little bit of something for different types of Superman fans. There’s team Superman, Superman’s family, old Jon, Young Jon, solo Supes, with a lot of big names attached to it.

I kid folks. I have my share of stuff I think is boring that others find great.

Hopefully, they enlarge Kandor soon so there will be more kryptonians. The old bronze age superman family had van zee and ak var from Kandor.

Oh I hate to tell you this but I believe a majority of them died in Bendis run. Rogo-zar killed them in his rage.