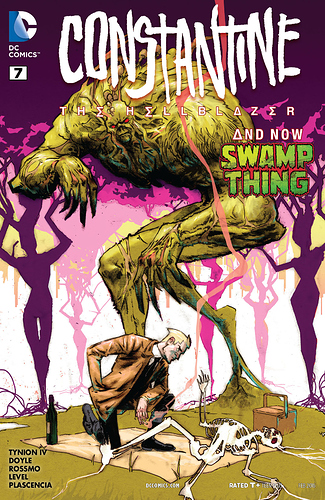 “When all Americans are treated as equal, no matter who they are or whom they love, we are all more free.”–Barack Obama

We can’t bid October farewell without celebrating LGBT History Month!
I’ve loved getting to meet a lot of you through the new club feature. Let’s keep the party going. Seeing how Halloween is also right around the corner, we’ll be revisiting Constantine’s 2015 series.


What are you enjoying about Constantine and Oliver’s interactions?

I am really digging how natural their conversations are. I like that they genuinely seem interested in one another. Their scenes are really sweet. John kept trying to avoid Oliver as a way to protect Oliver (and himself from more heartbreak), but Oliver is just too charming. It does suck that as soon as John lets Oliver in just a smidgen, Swampy crashes the scene and Papa really punctuates the whole point Constantine was making about people close to him being in danger. I want to see more of these two together.


What was your favorite part about Constantine and Swamp Thing’s team-up?

What I enjoyed most about Constantine and Swampy teaming up was that you could feel a history between the two. They’re both pretty major players in the DC Universe and getting to see them working with each other was a lot of fun. I liked the part where Constantine was planting the little Swamp Thing’s around the park. Seeing the one little Swampy on a toy boat was funny. John talking about eating the sprouts reminded me of the live action Swamp Thing on DC Universe where a certain character eats part of Swamp Thing

It is funny how John is opposed to tech. The fact that he has an answering machine, but doesn’t even plug it in because it’s powered by magic is hilarious. I am glad he was putting his skills to use and getting on Kregslist to find jobs. Of course John would know one of the demons he was called in to exorcise from a child, LOL. They keep referring to Constantine as a thief and stuff, so it is nice getting to see him do something semi-legitimate (he did take $1.5k from that woman knowing it was his friend possessing her kid and he would just chat the creature into leaving her son in 3 minutes tops).

I’m glad the art style from the beginning/first few issues continues throughout these issues. I really like the art. It’s fun and the colors are dark, yet vibrant and deep. I do want to see where the story goes. We finally know why Rumor was buying up property. We also found out the one behind Mr. Rumor’s actions. Neron is a big deal. I’m not sure if he’s the same version as the one Midnighter faces, but I know some of his story from Legends of Tomorrow. I wonder how that story will continue to develop in the next few issues. 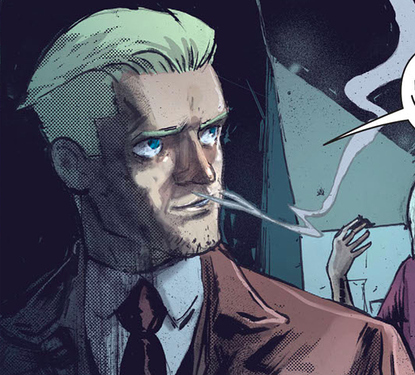 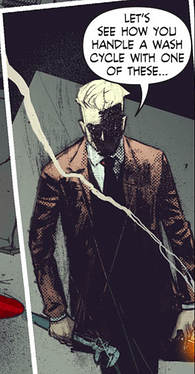 What are you enjoying about Constantine and Oliver’s interactions?

What was your favorite part about Constantine and Swamp Thing’s team-up?

What are you enjoying about Constantine and Oliver’s interactions?

Funnily, I thought it was kind of odd that Oliver pushed so hard. Like, guy comes around all cryptic and kind of prick-ish, and you go and find out where he lives just to hook up? Man, either Oliver’s really into skinny-as-a-rail Brit chain smokers, or I’ve just not found the right guy.

Their interation is nice enough when they do hook up, but we don’t get a lot of it before Papa Midnite comes in (BTW, Oliver’s reaction to that name is pretty priceless). I’m hoping that after this adventure that we see the two have a really good, meaningful issue together, though with four issues left, I’m unsure if they can.

What was your favorite part about Constantine and Swamp Thing’s team-up?

Their weird best frenemy relationship – it definitely feels like an evolution of their first adventures back in Saga of the Swamp Thing. They give each other loads of crap, but they do seem to care for each other, what with Constantine agreeing to help and Swamp Thing showing concern for both John and Oliver.

I don’t know if I’d really call this a “new” job, just the same thing he has done but with the internet. Still, that was a pretty fun issue. Some of those adventures sound like they could have been cool single issue stories on their own. The Night Vale reference was also pretty funny.

Oh, and something outside of the regular thoughts: A couple of times, characters here talk about how the magic world is changing and magicians and demons alike are trying to find ways to adapt. While I think they’re probably really talking about the whole Neron deal, I feel like the events we see in JLD/The Witching Hour, also by Tynion, might work with that too. I don’t know if he would have had this story in mind that early on, but at the very least I think it could be a fun headcanon, if not addressed.

Oliver is such a good guy

Papa’s familiar was really cool and scary. I really enjoyed that exchange as well.

The subway ride was really funny. I like when heroes take public transportation. I’d want a picture too

I hadn’t read a Constantine title before this either. We read the first 5 issues for Week 5 of DC Pride. If you read them let us know what you thought

Funnily, I thought it was kind of odd that Oliver pushed so hard.

Hmmm, I didn’t think about it like that. Do you think he might be a baddie? I’d like to see more of Oliver, but just like you, I don’t have the highest of hopes with the series having a short run and then never hearing about him in any future Constantine appearance I’ve read. Imagine if Oliver just shows up in JLD. Tynion is involved in both

That describes them perfectly. I still gotta read Saga. You also get that best frenemy vibe from their limited JLD interactions, so I do want to see more of them together.

LOL, I would classify it as the same career, but different job. I wanted some of those stories to be longer. They were funny as part of a montage of sorts, but they really could have been extended and I’d have read the heck out of them.

Yeah, I couldn’t help but have the Witching Hour on my mind while reading that. I don’t think it would have been that as this was still New 52 right? I will still connect them together in my mind unless the following issues debunk that headcanon

I thought of it more like it might have been contrived on the writer’s part – like how in normal romantic comedies with straight couples where the get together for seemingly no reason. …Though now that you mention it, he has been remarkably calm about all of this…

As for the New 52, I believe this book goes on a little bit into Rebirth – you can see the modern DC logo on the last few issues. I remember Tynion saying he had the idea for a new JLD book long before it was announced, so maybe this was a preview to what he had in mind? Unless it’s directly contradicted, like you said.

I agree that Constantine and Oliver’s dialogue is spot on and engaging. I don’t think Oliver is making excuses for John; he just see him for his heart and not his effed up actions. But, at the same time, the relationship is bittersweet because we know John is right…nothing good is going to come from this relationship.

A good Swamp Thing/ Constantine team up is always fun. I liked baby-Swamp Thing in the boat, too! I wonder why Swampy didn’t talk…in the…same…slow manner…we’ve…seen…elsewhere.

The little vignette showing John making a living was awesome! I loved the one with the rabid animal and John cursing them out for calling the wrong guy. Lol.

Overall, I enjoyed these issues. The art was great, especially in the Midnight Lounge. Look forward to seeing how everything plays out, but not necessarily to seeing what becomes of Oliver and his kids in the end.

I can see what you mean. I figured it was just a way of showing that people that get close to John get put in dangerous situations ASAP because of that connection. I also didn’t really mind it because I know it’s a limited series and didn’t mind just cutting to the chase, but now that I think about after you pointed it out… He was pretty chill about the whole thing. I hope he’s not trying to get close to John because of a vendetta or something. I think they’re so cute together

I could see some planting of seeds happening on Tynion’s part. He would just have had to tweak it to involve the Tree of Wonder/No Justice stuff I guess. Okay, I’m definitely viewing this as a JLD prequel series now

the relationship is bittersweet because we know John is right…nothing good is going to come from this relationship.

That’s the worst part. I like them together and the playfulness in their dialogue and actions. Like you said, we know how this is most likely going to end. I am going to enjoy it while it lasts and hopefully it’s a case of them going their separate ways and not Oliver dying or something.

Oh my gosh, the one with the animal was probably my favorite too. They could have called animal control, but their minds just automatically jumped to supernatural being. Things must be really bad if that’s where your mind goes right off the bat.

I hadn’t thought of his kids. They do mention them a lot, but we haven’t seen them show up yet. Now I’m scared for them.

Sticking with Constantine luck as we’ve known it, something is going to have to happen to break Oliver’s faith in him. Nothing like a good family tragedy to get him there.

That’s dark, but it would fit the themes and story being set up in this series. I hope that it doesn’t go there, but I won’t be shocked if it does.

It seems pretty in line to how Snyder wrote Swamp Thing in the New 52, where it was an alive Holland taking on the reigns as protector of the Green.

I wish other writers would follow suit. It’s a lot easier to read without all the strange pauses.