"The beginning of love is to let those we love be perfectly themselves, and not to twist them to fit our own image. Otherwise we love only the reflection of ourselves we find in them." -Thomas Merton

As always, everyone is welcome to participate.

SPOILER discussion begins now and goes through June 30th. Let us know what you’re thinking of the comic as you read.

Special thanks to @Mae for helping me decide which issues to choose that feature Alysia Yeoh. 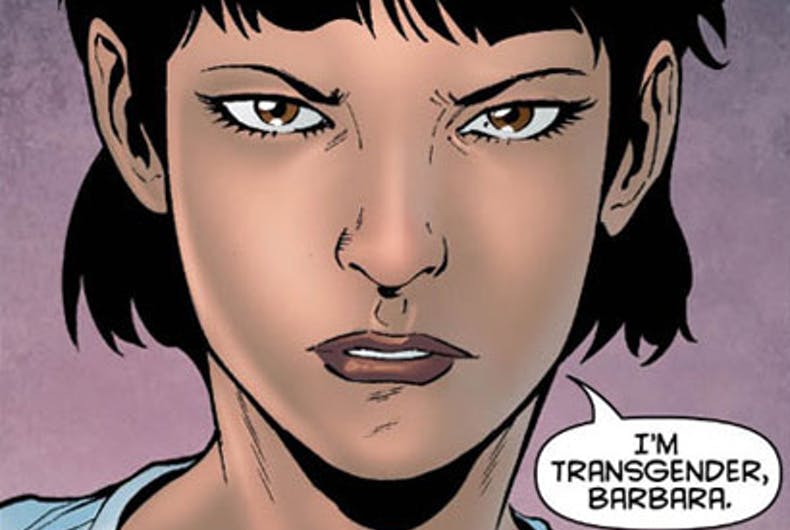 Perfect timing/placement – I was doing a reread of the New 52 era Batgirl run fairly recently and stopped at 20. Might as well just go back to 19 (especially since that’s the issue where Alyssa…outs herself, if that’s the right phrase, to Barbara) and go from there!

I’ll be rereading New 52 Batgirl as well. I’m looking forward to reading it and seeing if I pick up on anything I didn’t the first time (and yeah, I believe coming out is the correct phrase).

Thanks for always joining @Jay_Kay. Love your perspective on things

Can’t wait! I’m still not done with Gotham Central but I’ll post my final thoughts on that later today hopefully and jump on this straight away!

Also, probably worth mentioning for anyone who missed our discussion on which issues to select for this week, is that #45 is not part of the arc obviously, but it’s an important milestone for Alysia and queer representation with the first gay wedding featuring a trans character, if I’m not mistaken. No one can be expected to read from 19 to 45 straight through in a week but that issue is separate yet essential to Alysia and her character overall. I was actually reading Batgirl (2011) a few months ago and stopped around issue #15 to do my deep dive into the Birds of Prey, so I’ll go back and finish off those few issues before #19 and keep going! SO excited!

Thank you for pointing that out @Mae. I should have been more clear. You are not required, or expected, to read 19-45. The reading material is #19-24 and then you skip to #45 for the wedding.

Will be great hearing (reading) your thoughts Mae!

Okay, reading #19 again and reading the scene where Alyssa comes out of the closet, and…I’m a little unsure if this scene works. Like, I get what it’s trying to do – Barbara unloads all this big, personal, private stuff to her and Alyssa answers back her acceptance with her own, showing that their friendship is growing. But, considering that one of the big things that Barbara mentions is that the guy she’s dating is a SERIAL KILLER…I feel like if I were in her shoes I would be a little more concerned about that than immediately coming out of the closet.

I don’t know, maybe I’m being too critical. I do get the feeling that Gail meant to write a scene like this a few issues earlier, when she was booted off the book for…reasons (the New 52 had some great stuff, but it had some AWFUL editorial, especially early on), and she just spliced it in here, which I think would explain a lot about how the scene was handled.

Yeah I’m not sure why the switch in writers in the middle of this run happened. That was kinda jarring. But I really like the book overall.

@Jay_Kay I never noticed that switch. Maybe Alysia’s coming out would have been incorporated in a smoother way had she stayed on during those previous issues.

@Mae I like the book overall too. Honestly, I didn’t notice the change that much.

Yeah, it was Ray Fawkes who handled #17 and #18, who is a decent writer, but I for one was very glad when they relented and put Gail back on pretty quickly.

And I want to make it clear – I do really like how Babs handle it and I think it was overall a good move, I was just more critiquing the how it was implemented rather than that it happened, if that makes sense.

Reading issue #19 and poor Alysia having to just wonder what’s been happening with Babs. She was probably thinking the worst and is just happy to have her friend back safe and sound.

@Jay_Kay That completely makes sense. I know what you mean.

For me, I think that scene still works because most of it is said through Barbara’s inner dialogue and feels like a montage almost. We don’t actually get the full conversation, so I imagine it didn’t just come out of the blue for Alysia. Maybe if Gail had more pages to tell that, we might have had a better lead in to the revelation of Alysia telling Babs about her being trans. Ultimately, I just love how Barbara handles it. She tells Alysia that she loves her and they hug. It does kind of suck that Babs has to go immediately after so Alysia is kind of just there by herself after that.

Do any of you think it was a good idea for Babs to not tell Alysia about Batgirl?

Yeah, the downside is that comics like this rarely get to really dig into the character interactions and get those meaty dialogues. I think it’s part of why one of my favorite issues of Ultimate Spider-Man is the one where it’s focused purely on Peter telling Mary Jane the truth about being Spider-Man because it is so rare.

As for whether not telling Alysia (and I’m just now realizing I’ve been misspelling her name this whole time, oy) about being Batgirl is the right move…yes and no. On one hand, I can see Babs not wanting to overload her with things, and while she is already in danger just because of Babs’ creepo brother, I could see the point that telling her the secret can only put her more in danger – it’s a cliche that the heroes family and friends can get hurt, but the thing about cliches is that there’s a grain of truth to them.

On the other hand…it is kind of a lie by omission. It’s possible that if Alysia found out by other means, she would feel a bit betrayed and more wary of her – if Barbara held this back from her, what else could she be hiding? Doing it this way runs the risk of her losing her friend later on when it could potentially strengthen their bond.

The thing is…I don’t remember of Alysia does actually find out, it’s been a while since I read this stuff and I’m dreadfully behind on the Rebirth era book. I’m definitely looking forward to finding out!

True, There is always the chance of Alysia (LOL I just thought the misspelling was your autocorrect or something) being in more danger if she knows Barbara’s secret. You also have Alysia being in danger because she doesn’t know though. Maybe if Alysia had known earlier about James, things could have been different. Barbara does risk losing her dear friend In this she pretty much loses her family, so she needs her friend.

I’m only up to the point that DC Universe is at in regards to Batgirl’s Rebirth title. I don’t remember if Alysia finds out either. I just remember that Barbara’s eyes suddenly go from being blue to green at some point

I love Alysia, I hope she comes back. Other than Bombshells United, I don’t think she has been seen again outside of this Batgirl run. Sorry, I’ve been busy so I’ll jump on the issues soon and post my thoughts on the reading material in the next few days! I hope more folks join in, or have most of y’all already read this recently?

I love Alysia too.

BTW, I had honestly forgotten how creepy Shauna and her puppet were.

Side note, @nu52: I actually hope you keep your rainbow icon, it’s so bright and cheery, I love it! Anytime I see it browsing topics or comments, I go, yup, that’s nu52 alright

Yeah, Shauna is a creepy villain, though if I were perfectly honest, I more prefer the classic Arnold Wesker version of Ventriloquist.

Thanks, Mae. I actually really like the rainbow icon. I keep going back and forth because I do miss my pink one, but I’m probably going to be keeping this one