"The beauty of standing up for your rights is others will see you standing and stand up as well." -Columnist Cassandra Duffy

SPOILER discussion begins now and goes through June 22nd. Let us know what you’re thinking of the comic as you read.

Hope you enjoy Gotham Central: Half a Life Winner of the 2004 Eisner Award for Best Story

Special thanks to @Yazme for helping me with this week’s selection. Thanks to @Jay_Kay for having piqued my interest in Renee Montoya. 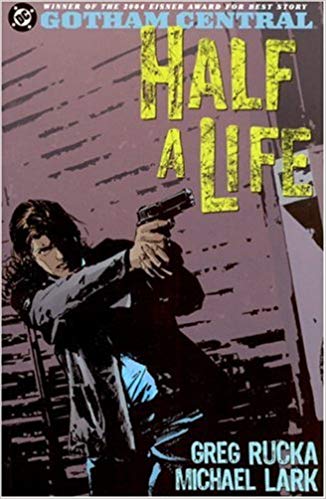 Glad to be a good influencer.

I’m really excited to read this.

Neat. It’s been years since I’ve read this, should be a fun re-read.

I love Gotham Central! I’m on it like a bonnet

I’ve heard nothing but great things about Gotham Central. Your enthusiasm has got me hyped @Vroom @biff_pow. BTW, biff_pow, that image of Ambush Bug is hilarious.

Glad I’m getting an excuse to make time to re-read this series! Amazing book. So underrated.

Glad to have you on board @Batwing52

Just finished #6 (because I started reading from #1-5). Poor Renee. That’s pretty messed up they did that at her work.

Yeah, I’m pretty sure there is a worse way to be outed like that at work, but I’m having a hard time thinking of a worse one.

If there are worse ways, they are few. It’s pretty crazy that Renee still doesn’t feel all too safe despite the head of Major Crimes Unit being Maggie Sawyer. That’s how unwelcoming some people can be.

On a lighter note, Major Crimes Unit being referred to by their acronym of M.C.U. makes certain lines of dialogue pretty funny

Gotham Central! This series is one of my all time favorite comics. I just reread it a little while back so I probably won’t be following along with the book club, but still, I have to gush over it. For me, this is exactly they type of world building I love. Seeing Gotham City, and the fantastic, twisted battles between caped crusaders and villains through the eyes of regular people trying to do good and just live as they are is fascinating, powerful, and tragic. In the end, not only are they fighting against true evil, Renee is still dealing with regular issues that plague us in the real world as well, such as homophobia and police corruption.

@chaotickairos No worries! I love reading about your overall thoughts on the series. If you want to follow along with the comments as more us read on and anything reminds you of something you want to talk about, feel free to join in. We can always use more opinions and thoughts to stimulate conversation.

I’m 8 issues in and the world building is insane. I’ve loved every single issue so far. My favorite part has been seeing Gotham through a lens we normally don’t get the opportunity to experience. I appreciate that we see the good and bad of the human aspect in Gotham.

@nu52 It’s truly an incredible book! It just weaves together so many different characters and viewpoints. I’d love to see this kind of story again, either in a rebirth Gotham PD book (hmm, Nightwing is a cop sometimes, could be a place to take him at some point) or with other heroes. Like, a Daily Planet book, or something like that.

There really isn’t a bad arc in this series, but outside of “Half a life”, “Soft Targets” and “Dead Robin” are some top tier ones.

@chaotickairos The setup for this book could work excellently for a Daily Planet setting. DC has some interesting characters that are journalists, reporters, correspondents, photojournalists, etc. They could really do something with that. I like that idea, especially since it could be very topical. How would they handle people buying less print media? How would they deal with the public not believing everything the media says or maybe a rivalry with a different paper or even within departments (the same way the GCPD has people competing between the M.C.U. and the other cops).

I’ll be looking forward to those other arcs. The title for “Dead Robin” already has me intrigued.

I can’t wait to hear your thoughts on all of them!

The art in this book is some of my favorite. The art alone added greatly to the emotion and atmosphere of this book. The scenes with the rain were some of the best panels. I highly enjoy the simpler art style that manages to convey the feelings each character is experiencing all the while the story still manages to come through. The art reminded me of Long Halloween, Dark Victory, and When in Rome. The use of shadows was another plus for me. It was gorgeous.

Overall, I’m going to keep reading this book. I’m looking forward to what else is in store for these characters.

I’ll be starting this series from #1 soon! Loving all this discussion!