DC Mafia Games Presents - Injustice Gods Among Us (The Remake) 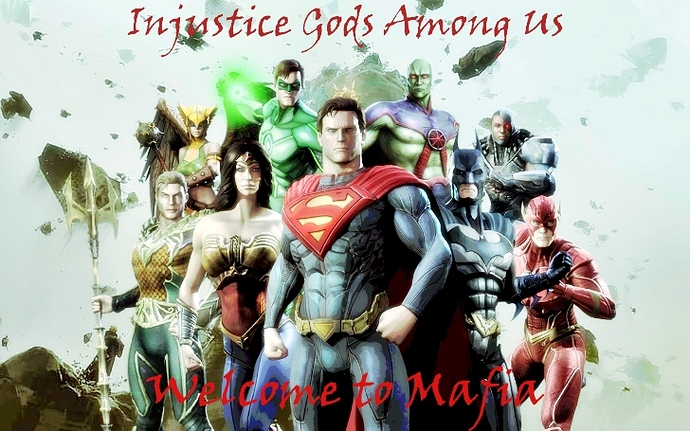 Injustice: Gods Among Us The Mafia Game

Hello and welcome back to DC Mafia Games after a long hiatus I thought that it was time for a new game…Kind of at least. This will be a remake of the first Injustice one that I tried to create But obviously as you can see this will be the first part to the Injustice games!! Hope you are all buckled up because here we go!

It’s been a long time coming… Superman has taken over no thanks to the joker who has killed Lois and their baby. It is up to those that Batman has called over from earth prime as well as all those of the Insurgency to bring order and peace back to the world. The world before Superman…

The game has 2 stages: a day phase and a night phase. During the day everyone gets to vote out a player they feel is a villain. During the night phase the villains converse on who they are taking out of the game. Just letting everyone know now the game starts in a night phase. Your objective is to find the villains and vote them out before they find you! That’s really it. Everything else is up to you players! There will be an example post in the FAQ of what these will look like. Character abilities can be used during the day phase or night phase depending on the character. How it usually goes is most players use their abilities during the night phase of the game unless it is a day voting ability or an immune ability in which case those get used during the day phases of the game. The game can be complex at times as know one knows who is who (except for the villains). Use a strategy and keep your friends close…

If anyone who hasn’t played or has played is welcome to join!

First and foremost, I’m in.

Second, just wanted to make sure that I understand this:

Sinestro - The Enemy of the Lantern Corps, He can choose a number between 1 and 10. with that number they get to use that ability. (Abilities being death, double voting, learning a character’s identity or allegiance, and resurrection)

Does that mean he gets to do each of these things twice?

Hawkgirl - The Mace Wielder, she is able to attack TWO of the insurgency in one night. However, this can only be used ONCE

And is “attack” a word which here means “eliminate”?

Aquaman - The Former King of Atlantis, With his knowledge of the sea he is able to track the whereabouts of the other Aquaman; forcing him to join the regime. This can only be used ONCE .

Aqua Man - The King of the Seven Seas, Using his king-like abilities he cannot be tracked or known by any character with a tracking ability or a role exposing ability. This lasts the ENTIRE game.

So can Aquaman track Aqua Man or not? These two descriptions seem contradictory.

Black Adam - The Enemy of My Enemy Is My Friend, He is able to block a player’s abilities. This can be used during the ENTIRE game.

Does this mean he temporarily blocks the ability of a player of their choice each day/night, or that he picks one player who then loses their ability for the rest of the game?

Catwoman - The Cat With Nine Lives,

Did you forget part of this one?

Bane - The Master of Tactics, He is able to come up with a plan that helps during the day poll. note this risks the player being outed. This can be used ONCE

How does that work? Isn’t that just what the Regime Chat is for?

Ares - The God of War, He is able to force a character that is NOT a part of the Regime to join them. This can only happen ONCE .

Does he get to pick, or is it random?