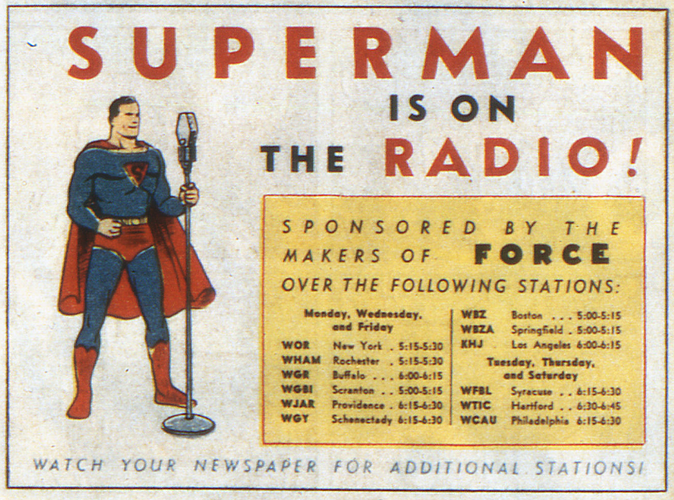 871×646 948 KB
Order, order. The Parliament of Historians will come to order. The business to be voted upon before this house is thus: The characters and stories from DC Comics have made their way onto the wireless radio, the motion picture shows, and the tele-vision. In turn, these media have added their own DC characters, elements, and stories that have made their way back onto the pages of the four-color books. Your decision, which of these media have had the greatest impact on the comic book DC Universe. As always, as a member of this body you should defend your vote below.

I can’t think how movies or radio have influenced comics more strongly than television over the years. A lot of characters and ideas have flowed from TV back into the funny books, whereas movies don’t have as much time to introduce original ideas, and while radio created a few important concepts early in DC’s lifespan (Kryptonite and Jimmy Olsen come to mind), it’s largely fallen out of favor compared to its audiovisual cousins.

What are some examples of items from movies that have stuck around in the comics? I’m sure there are plenty but nothing immediately springs to mind. Jimmy Olson and Kryptonite from the radio show, and I think that’s where forces first called the Daily Planet ( could be misremembering), but that’s all Superman related. TV influenced the flavor of Batman in the 60’s and hagave us Harley Quinn who’s everywhere right now.

I haven’t voted myself yet, but remember Superman first flies in a motion picture short.

Also, Reeve becomes the model for the man of steel for many artists

So did George Reeves before that.

The Adventures of Superman (radio series)

The Adventures of Superman is a long-running radio serial that originally aired from 1940 to 1951 featuring the DC Comics character Superman. The serial came to radio as a syndicated show on New York City's WOR on February 12, 1940. On Mutual, it was broadcast from August 31, 1942, to February 4, 1949, as a 15-minute serial, running three or, usually, five times a week. From February 7 to June 24, 1949, it ran as a thrice-weekly half-hour show. The series shifted to ABC Saturday evenings on Octo...

Wireless Radio for the Win!

The adventures of Superman Radio Show introduced so many key concepts and characters to the Superman Mythos.

The Intro we all know and love:

“Presenting the transcription feature, Superman.” (followed by Superman’s “flying” audio effect)
Up in the sky! Look!
It’s a bird!
It’s a plane!
It’s Superman!
“Yes, it’s Superman—strange visitor from the planet Krypton who came to Earth with powers and abilities far beyond those of mortal men. Superman, who can leap tall buildings in a single bound, race a speeding bullet to its target, bend steel in his bare hands, and who, disguised as Clark Kent, mild-mannered reporter for a great Metropolitan newspaper, fights a never-ending battle for truth and justice.”

“Faster than a speeding bullet. More powerful than a locomotive. Able to leap tall buildings in a single bound.’
Look! Up in the sky!
It’s a bird!
It’s a plane!
It’s Superman!”

Bud Collyer voiced Superman in the Radio Show, the groundbreaking Fleischer animated shorts of the 1940’s, and the Filmation cartoon The New Adventures of Superman.

The radio show helped shape the Superman we know today.

@msgtv BTW, what is wired radio? Wasn’t it always wireless?

Think old army movies with the crank handset radio, wired radio. And going for old timey Brit expression “the wireless” where one would listen to the King try to give a speech

I used the W place because I had heard about the items I excerpted, but I wanted to get some type of confirmation. I know it is not always reliable.

Oh, we use the W place we’re just snooty about it.

While movies haven’t led to the creation of plot devices or new characters, I’d argue movies have had a more lasting impact. If you take Burton’s Batman as an example, the movie didn’t create a more violent Batman, but it completely justified a more violent attitude.

It’s impossible to deny the evidence of an increasingly more violent comic book landscape which arose in the wake of Burton’s Batman. Even the Flash television show looked and sounded like the Batman movie.

And take Donner’s Superman. After the unequaled success of that movie, comics took a distinctly wholesome and nostalgic approach.

Some might even argue, Burton was in direct reaction to Donner. And with that argument, you’ve got over two decades of movie-influenced comic books.

@harley.333 brings the unexpected, but convincing argument that movies contribution is less about specific characters than it is about a generational tone set for the comics

I think Burton’s tone was just reflecting what was already in the comics. The film was post-Miller and Dark Knight Returns.

@harley.333 @msgtv Counterpoint, Frank Miller’s The Dark Knight Returns came out in 1986 and Alan Moore’s Watchmen came out in 1987, both providing a critically acclaimed new dark and gritty (grim dark) take on comics that predated the 1989 Tim Burton Batman. As a Bronze Age guy, Superman was always an upbeat title to me. The Donner 1978 Superman seemed to reflect the comic rather than the other way around. The movies seem to be influenced by comics and in turn that reinforced the comics.

And that seems to be the way it’s been in my mind. Comics have had a huge influence on movies but not necessarily the other way around.

I completely agree, the movies merely reinforce concepts which are created in the comics. But comics aren’t an option for our discussion. And besides, it’s my opinion that movies have had the largest impact on the overall attitude which is seen in comics.

Sure, Frank Miller (and even before him) had a dark, gritty Batman. But Green Lantern wasn’t dark and gritty, or Flash, or Legion of Super Heroes, etc.

But after the Batman movie, there’s an obvious shift.

Radio hasn’t had an impact like that, and neither has TV.