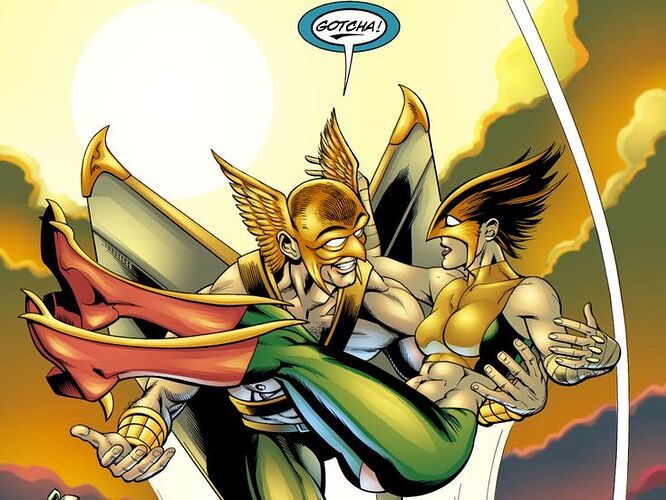 DC Comics’ Hawkman and Hawkgirl (Hawkwoman) easily have one of the most complicated, muddled histories in all of superhero comics. The Hawk’s history extends all the way back to the Golden Age of Comics, with Hawkman’s debut in 1940. The lengthy...

Unfortunately
Hawkgirl’s comic book history is mainly tied to Hawkman’s, which is very messed up

This topic is on Hawkgirl, not Hawkman.

So this is the important series that explore the various Hawkgirls

1941 All Star 5 FIrst appearance of Hawkgirl

1961 The Brave and the Bold 34 Katar and Shayera Hol, married police officers from the planet Thanagar

2018 Hawkman Carter (and later Shiera) reincarnate in Time and Space, not necessarily in time sequence, totally revised origins for both

This post’s Links and Images are at the bottom

This is the transition from the Animated version of Hawkgirl Shayera Hol to Comic Book Hawkgirl Kendra Saunders.

Part of the Hawkgirl timeline in a previous post is:

Why is Hawkgirl in JL?

Why isn’t Hawkgirl the Kendra version?

At the time, DC Superheroes were infrequent on TV or Movies

So when the TV series Lois and Clark went into production

DC management ordered that the planned Lois and Clark wedding be abandoned, which resulted in the Death of Superman issues.

Why was the Kendra version created for the JSA series?

The previous attempts at reviving Hawkman, never a best seller, was so messed up; that DC gave up on the character.

Kendra in JSA was a young, fresh new character, with no other series to limit her use.

Shayera could kick butt, but Kendra could be more aggressive.

The Justice League was most successful with seven characters, the latest being the original Big Seven by Grant Morrison.

That group was largely used
Except for

Hawkgirl replaced the Peter David version of Aquaman, who guest starred in a few episodes.

Hawkgirl was much more versatile in action sequences

With her ironic mask and wings, her mace smashing through many obstacles.

John and the two female heroes increased much needed diversity in the JL.

Jonn Jonzz was vital to the JL Origin Story, which was the first three episodes.

Only Batman and Superman had appeared previously, so five new characters had to be quickly introduced.

Saying Hawkgirl was from the planet Thanagar was easy to explain, especially with the alien origins of Superman, Jonn Jonzz and the Green Lantern Corp.

Kendra’s origin became that of Reincarnation, which took two episodes of JLU in Season 3 and required the use of Hawkman.

Kendra was not in the Justice League until 2007 JLA, by Brad Meltzer.

Shayera was a JLA member

Paul Levitt wanted one member to die or betray the team.

A plot that character could easily be used in

The planet Thanagar was drastically revised in the

From a nice, friendly planet to a

Violent fascist one, who conquered other planets

Which is the main plot of the final JL episodes Starcrossed

So the Hawkgirl in Justice League Animated

Is a combination of characteristics of

10 Reasons Hawkman is Terrible (As Explained By A Guy Who Likes Hawkman) -...

Well, Legends of Tomorrow is coming up soon, so letâ€™s talk about Hawkman. I like Hawkman A TON. Iâ€™ve been tracking down the Geoff Johns/ James

Why Shayera in JL Animated No talk of reincarnation 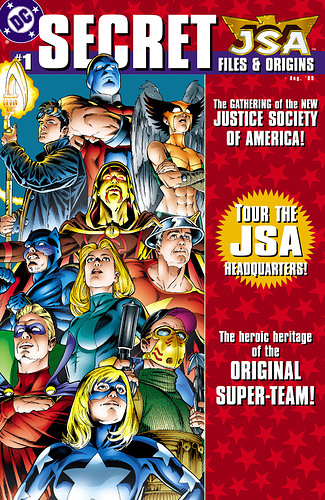 Get the inside story on how the latest incarnation of the original super-team came together—along with the final fate of one of the Justice Society's...

(Except for the dreams of Ancient Egypt)

(And that the
Original Hawkman
Carter Hall
Is her Grand Uncle
By marriage, not blood

Makes a later relationship between the two

But that is later 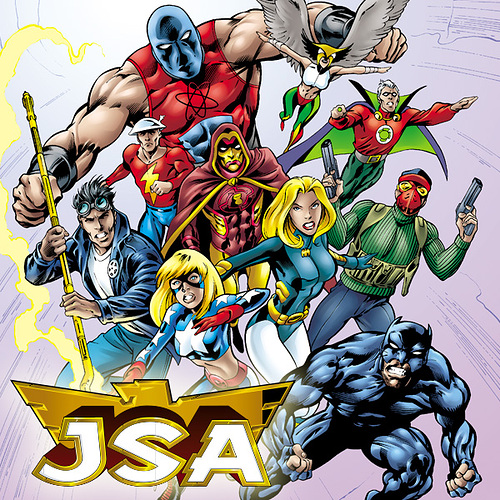 The original superhero team returns, training the next generation of heroes and defending the planet from deadly super-villains.

The Return of Hawkman

And a Complicated Relationship

Kendra is a co star in

The Hawkman 2002 Title
By Geoff Johns 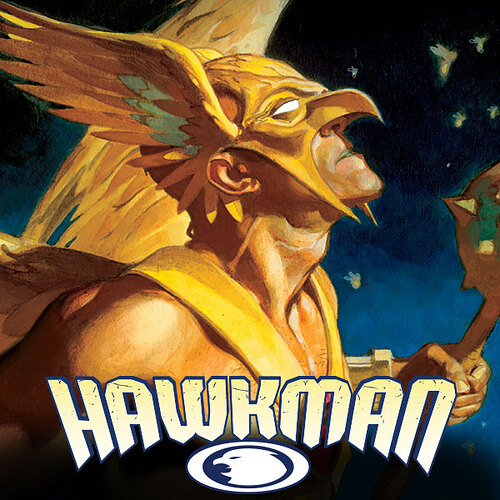 The Winged Warrior is back! Carter Hall soars through the skies as Hawkman in a series of new adventures.

Hawkmam 2002
Has everything
A Hawkman fan would want

The summary for issue 49 is

It is one of those
“End of everything”
Issues

And has no impact on current DC Continuity

Here are the final pages
Of issue 49

You’ll know why
If you look

Don’t say I didn’t warn you!

Added a review of first part of series at end

As to the over sexualization, yes just about every scene not in costume is in lingere, as to being well written it was not up to either of Simonson and Chaykin best. Though the art itself was good as was the basic story.

Afterwards, Kendra would only appear in team books or crisis events

One team up was

Who was also writing

Secret Six
At the time

In these issues
The two teams clash
(Including Harley Quinn)

One was Kendra, who does her mace and fists thing. 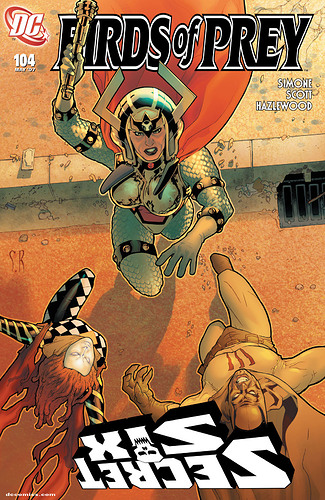 Guest-starring the Secret Six! The Secret Six cross paths with the Birds of Prey, just as Spy Smasher takes the dismantling of Oracle's operation into her...

Kendra also is in Justice League of America 2006 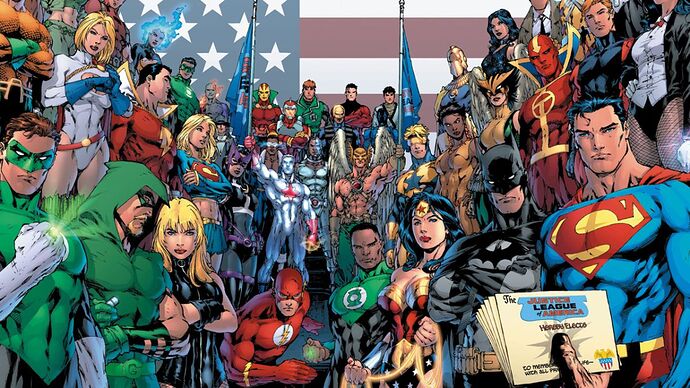 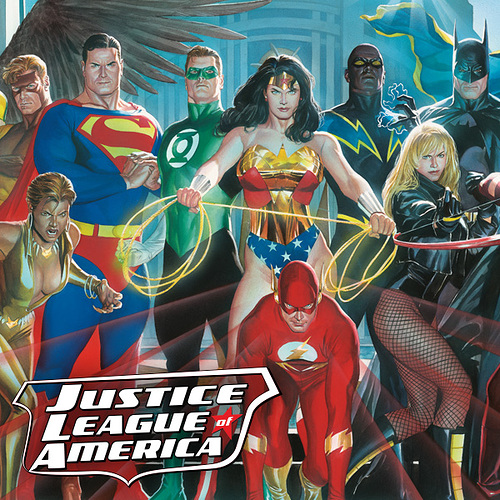 The DC Universe’s bravest and brightest superheroes come together to form the ultimate super team, ready to defend the planet from evil.

Having 10 members did not allow them all to be explored

Emphasis was on Red Tornado, Vixen, and Black Canary

Roy and Kendra left the series in issue 31

By then
Their only sub plot
Was their romance

The End of
Kendra Saunders

At least this version

The last page
Is my favorite

Since I started reading Hawkman in 1961

I felt 11 years old again
At least for a moment

As the lady bird said
“Oh how I’ve missed you.”

I am not crying
Okay a little

And this
Eternal Love
Was gone again