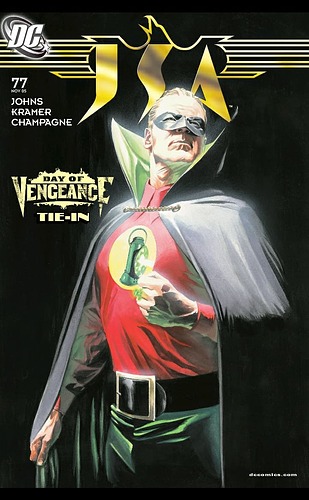 It’s not so easy to do a topic on Alan Scott, the Original, Golden Age Green Lantern

First of all
There are very few issues from the Golden Age, that contain the character, in our Library, aside from All Star Comics

And Golden Age stories didn’t usually have much depth.

Recently, Alan has gotten some coverage

Alan Scott is now portrayed as the

The powerhouse of that era

And in more recent stories in the

His LGBT+ background has been explored

What are your thoughts on Alan Scott?

Any favorite stories with Alan Scott in them?

I’m excited to follow this topic. Alan Scott is one character I don’t know as much about as I’d like it. My first real exposure to him was in the New 52 Earth-2 comics, which was a very different version. I did like him a lot in the Infinite Frontier series. 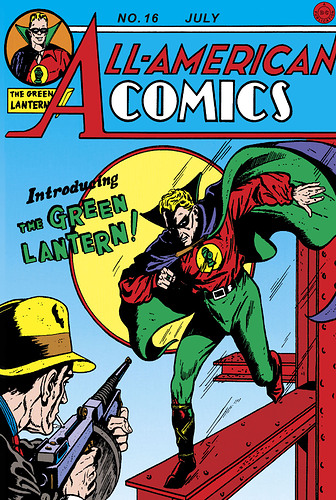 It seems Nodell was the major creator, with Bill simply being the writer for the first stories

A New York City subway worker, waving a green lantern, to signal “All Clear” during a train slowdown.

The major influence was

Aladdin
And his Golden Lamp.

Which had already been used in Johnny Thunder in Flash Comics six months earlier.

In fact
Alan Ladd was considered for the name of the character,
Before the movie actor became famous

Alan Scott is a character I have always been interested in, even before he became an LGBT+ character. I used to read Justice Society and loved his character. I will be back to comment once I have gotten to read All-American Comics. One of the reasons I have been drawn to him was his children. It was one of the few characters that felt like real life family in the DCU. I miss it a bit.

I certainly agree that Alan having kids made him relateable

And certainly he seems to care about them now

When Infinity Inc first appeared Roy and Danni Thomas had the parents reject even the idea of them becoming super heroes.

Part of it was to create drama

Part of it was to give emphasis to the new characters, without pages of the JSA training and interacting with them

Also Roy and Danni wanted the increased revenue of creating new characters in terms of comic book sales and outside media representation.

And now Jade and Obsidian are on Stargirl

The JSA were sent off to do eternal battle to stop the end of the world.

But I don’t remember much interaction between father and son

I also remember Todd being evil for a time

I would greatly appreciate

I like the idea of family in the DC Universe much. I miss Rebirth Superman with Clark Lois and ten year old Jon being a great family

Forgive me for not trying to do the research on Alan, Todd and Jen myself

Alfred Bester was a Science Fiction writer, famous for The Stars My Destination and The Demolished Man. He wrote Green Lantern in the 1940s and created Solomon Grundy and Vandal Savage. He did NOT create the famous Green Lantern Oath - “In brightest day, in blackest night, No evil shall escape my sight. Beware my power, Green Lantern’s light!”

Origin of the Green Lantern Itself

It was this almost lack of interaction as a family that I actually enjoyed. I read JSA during parts of Obsidian being there and read a lot of Outsiders. They often talked about being his child, but it always came off that they were mainly estranged from him. Then suddenly as we get closer to the more recent stuff, it is like he is almost father of the year instead. I liked the estrangement, it reflected a part of reality to me that I was not seeing elsewhere, outside of the fact most superheroes had a Ma and Pa Kent type of character. This, however, was different. There are different ways that family looks and this was a more accurate representation to me or at least spoke to me and my experience the best with the family term.

I never felt at ease with my own family.

I was smart but shy. I felt I was an embarrassment to all

Even my mom, who I took care of in her last 5 years of her life, I never felt unconditional love

Now all are gone except my sister, who tried to put me away a half hour away from her home, SC where I live in NYC

Like my mother lied when she talked to her, I don’t tell my sister much about my limited walking abilities, because she screams at me when I do.

Two of my favorite friends died last year. I miss them a lot.

The few remaining I talk on the phone rarely. I don’t have much to say and don’t want to bother them, much like Elemental Girl in Sandman

So DC University Community is what I have left.

Thanks again for sharing

Turok, this is why I love comics because we can see ourselves in certain representations. I saw myself in this Green Lantern family. I have had similar interactions and relationships with family members that you are describing. Some of mine I keep very close to my chest due to the nature of some of the history. I needed, for many years, to see that it was okay to not have a close relationship with family, but still try to be in their life in a limited capacity. Jade and Obsidian’s relationship with their dad did that for many years for me.

It is funny, in a not haha way, what a character in a comic book can represent for different people. We are talking about our own families, but through the lens of the original Green Lantern. It is fascinating to me. This is why these characters matter.

I am glad you have the community here Turok! I know some of the faces come in and out and some leave altogether, but I am glad you are still here and I hope you are able to have us stay in your life for many years to come. Sending you always love and light.

What you said means a lot to me

I will try to stay in Community as long as I can.

In Secret Origin: The History of DC comics

There is a discussion on

Is it on Left or Right Hand?

At 22 minutes The Golden Age 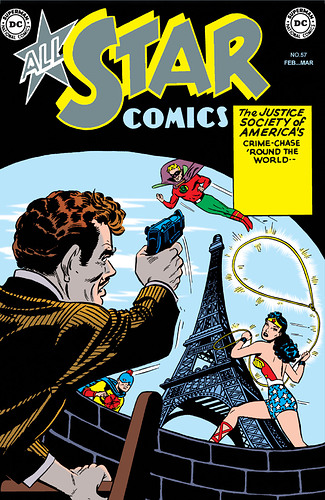 Final Golden Age issue: The last appearance of Golden Age Green Lantern, the Flash and Dr. Mid-Nite in the JSA story "The Mystery of the Vanishing Detectives!"

Hal Jordan as the new Green Lantern appeared in Showcase 22, in 1959

Flash 123 in 1961
Introduced the concept of Earth 2,
Where the Silver Age Flash, Jay Garrick, lives 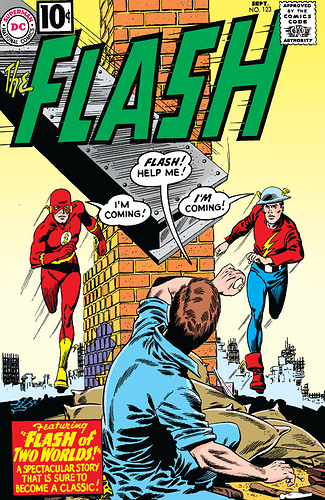 The first Silver Age appearance of Golden Age Flash and the first mention of an Earth-2 where Golden Age heroes live! Barry Allen appears at the Community...

Flash 129
Has a page which
Summarizes All Star 57 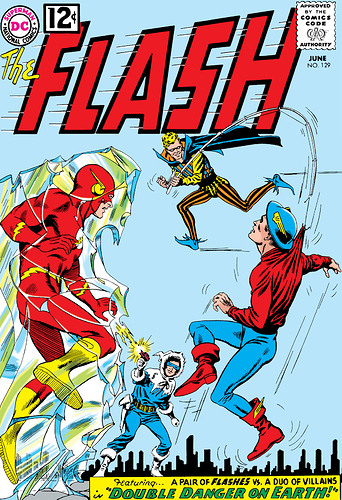 A comet strikes the sun, endangering Earth-2 with radiation. Meanwhile, Barry and Iris attend a costume party on Earth 1, and the proceeds are stolen by... 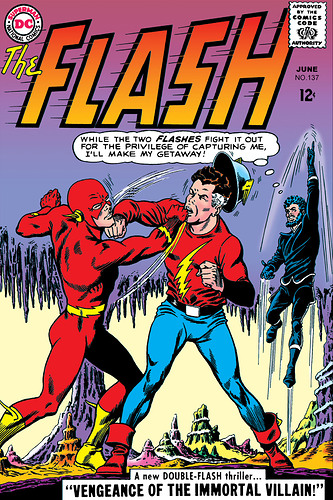 Vandal Savage tries to exact vengeance on the retired Justice Society, leading Barry to Earth-2 to help Jay free the other JSA members.

In Justice League of America 21

The JLA and JSA team up for the first time 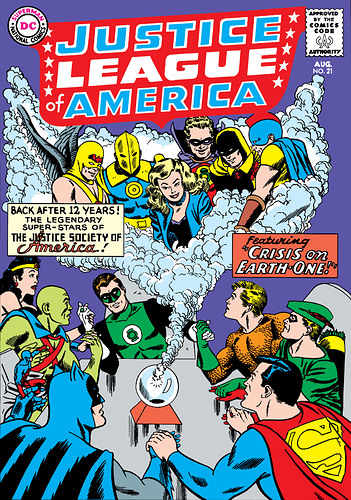 Crisis on Earth-One!' The Justice League of America meets the Justice Society of America! Both teams must band together to defeat the Crime Champions, as the... 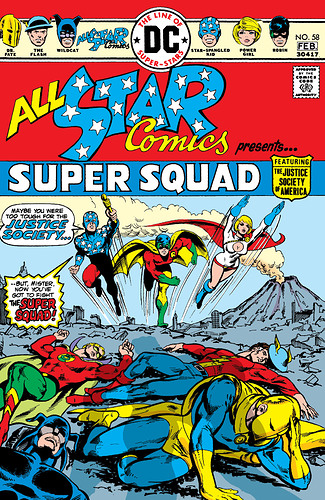 Featuring the first appearance of Earth 2 Superman's super-powered cousin Power Girl! When a series of disasters breaks out around the world, the JSA splits...

Set on Earth 2, Alan Scott was a charter member of this current day JSA

With so many characters in the JSA, Alan Scott never had a big arc in this title

For some reason, in our library, the art is only black and white 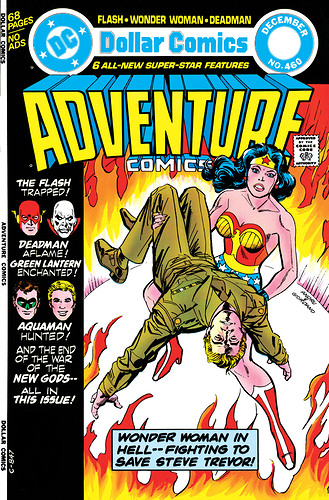 Thanks for liking my posts

You give me encouragement to keep on posting

Alan Scott is a character I knew next to nothing about until last year’s DC Pride anthology, where I read that very nice story about him and Obsidian.

I feel like I’m going to have to take notes on this thread, I really need to read more Alan Scott stories and I’m seeing a lot of good ones here. Thanks for all the research and sharing these!

All Star Comics, with the Justice Society of America

So when he left Marvel to DC in 1981
He created

The first story is set the day before Pearl Harbor, which caused the United States to enter World War II 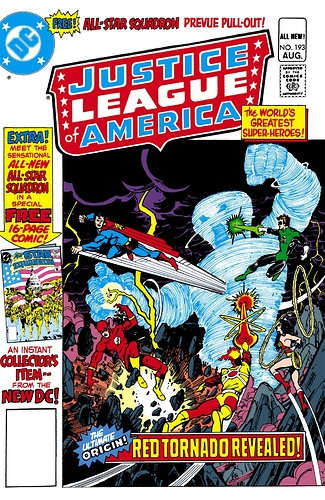 The secret origin of the Red Tornado continues! T.O. Morrow continues to try to crack the secrets of the android as the Justice League faces off against the...

The link to the series is 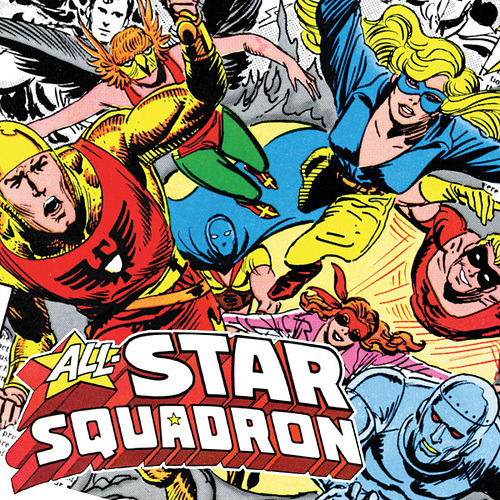 With the Justice Society missing, Dr. Mid-Niter, Hawkman, and Atom form an all-new group to fight against tyranny.

This is a great series but

There isn’t much Alan Scott in it

Roy had two ideas when he wrote All Star Squadron

To relect the actual events in World War II, as they occurred.

The initial storyline of All Star Squadron in issues 1 through 3 occurs between issues 10 and 11 of All Star Comics.

Also the real World had no Alan Scott, Superman or Spectre, who with their immense powers, could have ended the War in a very short period of time.

Nor did the War end in the comic books either

Roy covers that point in issue 4 of All Star Squadron.

Unlike the DC Super Heroes of the Silver Age in the 1960s, whose origins were scientific based

The most powerful heroes of the Golden Age were magic based

Even Superman was vulnerable to magic 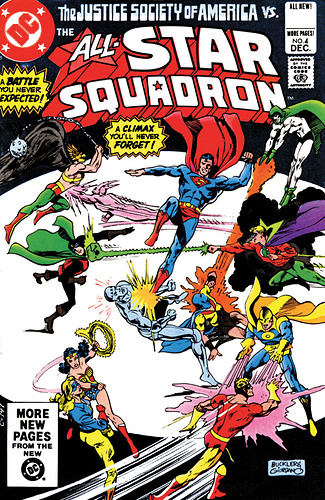 After seeing the carnage left behind in the wake of the attack on Pearl Harbor, the Justice Society of America decides to take the fight to the Axis powers...