DC History Club June 2021: Supergirl Being Super and Her Creators

Does Kara’s Tracksuit
Remind you of anything? 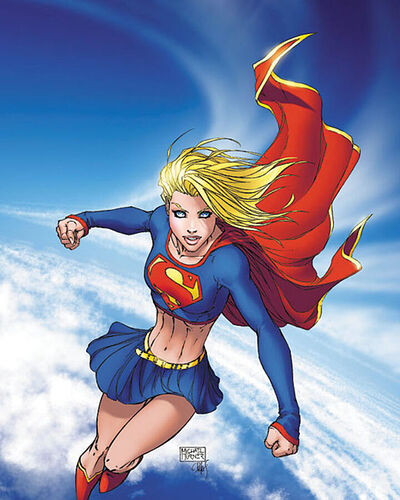 All the above screenshots

Leave out
The quiet moments
The conversations

Which I think
Are the heart and soul
Of this issue.

On Thursday, June 3rd
Discussions
on issues 2 to 4
Will start

But comments
On issue 1
Are still welcome.

First on Jones, her work definitely elevates the story. Just the image of Kara holding herself, one leg crossed behind the other while Jen gets ready to run. There’s a vulnerability to Kara, she’s literally protecting herself and there’s a power to Jen behind her. Just really nicely done. Jones has a somewhat angular style, but not too much so. The inks in this book have fairly heavy lines. It feels like her current work on Wonder Girl has lighter lines and maybe a little less angular.

Now Tamaki. Without giving anything away here, I think it’s fair to say she takes her time. She builds the book far more through character than action. That’s not a criticism, but the book is more intriguing than it is compelling. I feel like she’s probably halfway between her pacing for a YA graphic novel and a monthly book. Her current Batman work has nice characterization, establishes the neighborhood but moves at a much brisker pace. This is a story that is definitely helped by being able to read all four books back to back.

It was interesting to read a take on Kara where she basically grew up like Superman. I am accustomed to the original origin where she arrives on Earth as a teen. Seeing her with friends she grew up with was actually a nice change.

Agree, orphan girl always feels more like a gimmick and ‘how do I keep a secret ID’ this lets her feel more like a fully developed person/character

I first read the
First Appearance of
Supergirl
In a 80 page Superman Giant comic in the early 1960s.

I felt sad for her.

Everyone
She ever knew
Died
Abruptly
Painfully

She was the sole survivor
Of a now extinct culture.

Then she finds out that
Superman is her cousin

She had family still!

And what does the SOB do?

He dumps her
In an orphanage

“To protect his secret identity.”

The same reason
He tortured
Lois Lane for decades.

But more on that
Next week

looking around
To find someone close to her

And not seeing her.

Issue 2 is my favorite issue

Rather than the more realistic first two issues)

In creating issue 2
I can almost see

Here are the events
I want us to cover:

Kara Reacting to that Lost

Memories or Dreams
Of Earlier times
On Earth and Krypton

Finding an artifact that causes a journey to begin

How should we best go about this?"

And then
They did it
Magnificently

What are
Your reactions
To issue 2?

A different take on There are several excerpts from this episode on YouTube

Kara and Alex go back to childhood home

Bought the episode for 1.99

She is in Midvale

Until the end of issue 3, this series was more interesting that compelling or exciting to me. That’s not necessarily a fatal flaw. It’s a great character study, you really get to feel you know who Kara and her two best friends are and how they think and feel. And, you become invested in them to some extent.
But, I’m also not sure if I was picking this up monthly if this would have been at the top of my weekly reading list. There was nothing about it for me that demanded I read the next issue right away. It wasn’t slow exactly, but it definitely had a leisurely pace.
On art, Jones is an A+.
I get why others my love this book, but I just really liked it.

I’ll be sure to drop my thoughts on Being Super later but just thought I’d drop this here for the general Supergirl discussion: Placed it in the Reference Wiki

When we get to
1982
The Daring Adventures of Supergirl

Will bring it up again

(Then three friends were now only two

“I don’t care if you are different.”)

Except for who the “super villain” was

How can you do much research when you have another full time job?

She seemed to have people to call when ‘research’ didn’t go as planned.

So “They” couldn’t afford to pay her an adequate salary?

Her dream of another world was real.

Around 6 she came to Earth.

Soon after she tried to help.

The ones she helped considered her to be a monster

Today
A cry for help.

She knows her real name
She always knew.

Leaves home because found out

There’s this boy you see.
(As always)

When he got hurt
He got hard

Together for the Finale

Yesterday
I read the issue quickly

I thought there were big plot holes.

Now I read it
Panel by panel
On my phone.

I didn’t get everything
Because my vision is poor

And It was on a phone.

That was the first dominoe.

Midway
Kara finally remembers
What her parents
Were telling her
Just Before
She Rocketed from Krypton.

Krypton was about to Explode

I found out the deep motivations
Of the two main villains

Who thought they were heroes

And finally
Recognized
That

Their motives were
Complex and understandable

The rest of the story
Flows oh so well.

It was that kind of a story

Where the next action
HAD to occur

And then the next.

The wrapup was
Very satisfying.

All loose threads
Were fixed

Yet
At least
Five Storylines
Could continue

Without Kara
But not alone

Who refuses to accept
That Krypton is no more

And who will accept no excuses

Far from home
With limited resources

And
Then a wosh

Up in the Sky

And then the last line

Spoken In the air

“Hey
Uh
Can I talk to you
For a second?”

And the last caption:

I congratulate
Everyone
Who worked on this.

To me, the strongest issue of the series. Mariko Tamaki does her best work here combining the strong characterization from the rest of the series to some compelling action/conflict. And, the ending with Kara’s meeting Superman is very nicely done. It certainly does feel like more issues should be coming from this ending.

But here is her
Upcoming comic
With her current
Origin Story

Which is
Less Complicated
Than the original 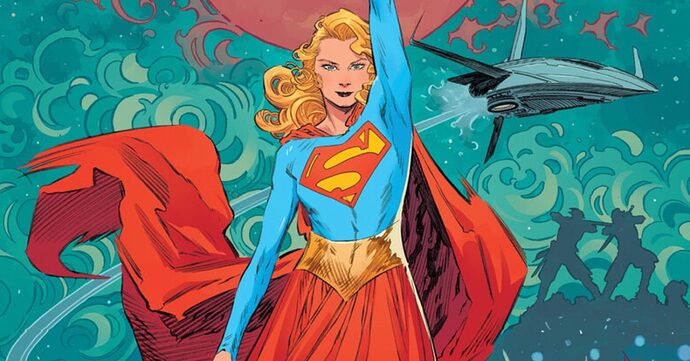 Bleeding Cool broke the existence of the Supergirl: Woman Of Tomorrow comic book last week, to much online criticism. The usual thing. And today, DC

The origin
Given in
The above post
Is the latest
Posted one month ago.

It differs
From the 1959 original
As well as
The CW Supergirl series.

There are other versions

Here is a link
To some of
The other origin stories

That can be used
As part of the roadmap
To describe
Supergirl’s more than
60 year old history.

I just read Adventures of Supergirl, we only have 6 chapters on DCUI and the 3rd story arc is left on a cliffhanger. I am a fan of the TV show and it actually got me into the Arrowverse. The comic is a lot of fun and even has a reference or two to the comic versions of Supergirl.

Today
We will start to discuss

Also
Below is an excerpt from my

1945 Comic book More Fun 101 introduced Superboy - Superman when he was young. Superboy was not part of Siegel Shuster contract. Siegel suggested it but DC said no. DC used character while Siegel was in Army

1947 Wonder Woman creator Marston dies. His wife Elizabeth asks for her being given the right to write Wonder Woman, as she worked with her husband on it. DC refuses.

Cowboy titles: (Atlas, now Marvel, had Kid Colt Outlaw, Rawhide Kid, Two-Gun Kid, and Wild Western, all by Stan Lee. Harvey had Boys’ Ranch, by Simon and Kirby, DC Comics had All-Star Western, which replaced the JSA in All Star Comics in 1951)

1954 Court Case National Comics Publications versus Fawcette Publications. Judge ruled Captain Marvel was a copy of Superman in 1952, after 11 years of litigation. Fawcette paid 400,000 in damages and got out of declining super hero market. Whiz Comics ended with issue #155 in June 1953, Captain Marvel Adventures was canceled with #150 in November 1953, and The Marvel Family ended its run with #89 in January 1954.

Batman Robin were portrayed in the book as homosexuals living together Superman was a fascist. Wonder Woman was a Lesbian.

1954 Wholesalers refuse EC Comics because no CCA seal on covers

1956 to 1967 Comic Books Jerry Siegel 's second wife, who modeled for Siegel Shuster as Lois Lane, shamed DC to employ Siegel as a writer for Superman stories again including Return to Krypton and Imaginary Story Death of Superman.

Mort Weisinger was NOT a nice man.

He humiliated his staff, including Superman Creator Jerry Siegel and E Nelson Bridwell, routinely, every working day. Roy Thomas only lasted a week with him before fleeing to work with Stan Lee at Marvel Comics.

But he created a strange and unique world

Here is his take on that era