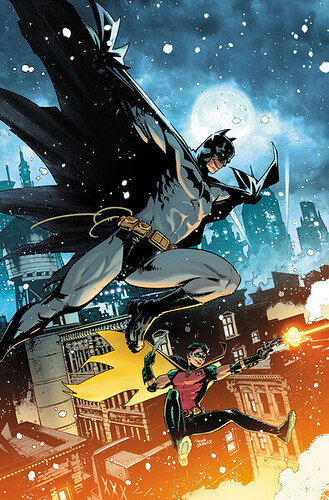 After an issue #6 appearance that left comic book fans slack-jawed, Robin returns to Gotham City just in time for the Holidays when Batman Urban Legends #10 arrives in comic book stores and on participating digital platforms on Tuesday, December 7,

Written by Meghan Fitzmartin, the feature-length story “A Carol of Bats” features art by Alberto Albuquerque Jimenez (pencils/inks), Nick Filardi (colors), and Pat Brosseau (Letters). This continues Tim’s journey of self-discovery from Urban Legends #6, and sees Tim balancing his drive to fight crime with his desire to be a great partner. Amidst the ashes of a devastated Gotham City and Fear State, Tim Drake comes back to Gotham City to help Batman and Nightwing try and put the city back together again after its devastation at the hands of The Scarecrow and The Magistrate. Along the way, Tim tries to get Batman out of a Scrooge-level funk, where the Dark Knight has serious doubts about if he’s failed Gotham City, and if its citizens will stop being scared and angry enough to have hope for the future.

To learn more about Batman: Urban Legends #10 and check out some variant covers, head over to DC Comics!

Are you excited for Tim Drake to return to Urban Legends once more? Let us know in the comments!