Hi @DCFanArtClub! So this isn’t exactly a Secret Santa challenge, but it fit so well with the title I just couldn’t resist.

Secret Santa is a game where participants pick a random name out of all the players and buy a gift for that person. We will use the ‘random name’ part as the tie in to the challenge this week.

Typically consisting of 6 members, they have had several characters in the group during this run. In fact, Wikipedia tells us there were 17 members between 2005-2011.

The challenge this week is to use the random number generator here on the DCU boards to generate a number between 1 and 17. Match that number to the list of 17 characters below and that is your character to draw this week.

Or you could draw Rag Doll along with whatever character you get in the random number roll.

The random number generator is pretty easy to use. All you have to do is create a new entry on this thread and only type the following:

That should generate a reply back to your post with a random number between 1 and 17.
I’ll give it a try in the first post below.

Due Date: December 11, 2021
Discussion, works-in-progress and final submission all in the thread below.

Oh cool, I guess you don’t have to put the kelex line in its own post all by itself. It picked up what I posted above and gave me number 12.

I’m drawing Jeannette!
I may need to do some research. Help me Stef!

Oooo nice!! Here is the 1st issue where the team meets Jeannette another really good one is where deadshot and scandall go on a double date with Jeanette and Iiana. (And doll sneaks in

) The Depths arc is really cool too we get to see her in her Banshee form plus WW and Artemis. I cant remember which book had her tragic backstory but maybe @keath can help???

I’m loving the number generator for this,

Lol you know me so well (plus you called Boomer too 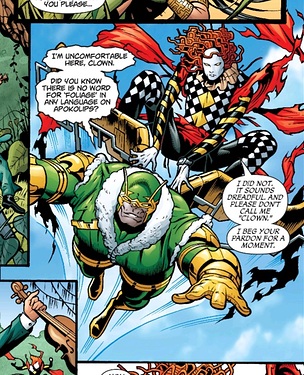 I’m sorry if I blow this thread up

@SuperRedDart will you join in this week? I remember you doing a pretty boss Thomas

RagDoll out of Minecraft… Oh boy!

Hello! I am Kelex. I can assist you with matters like community features and more. To find out everything I can do, say @kelex display help.

DwarfStar interesting never heard of him but from what I looked up already have some fun ideas brewing.

Harley Quinn? Who is that?? Lol, I love Harls!!