Hi @DCFanArtClub, this week’s topic is the Wonder Twins (and Gleek)!

Zan and Jayna were first introduced back in the 1970s in the Super-Friends cartoon. They are brother and sister aliens from the planet Exxor who also have a pet money named Gleek.

When they touch their hands together Jayna can turn into any animal and Zan can become water in any state. That led to a lot of crazy combinations (like an Octopus riding an ice tricycle), but hey, it was the 70s and it was all in good fun.

DC brought them into the Super Friends comic series (starting with issue #7) and they popped up a few more times over the years. A very 90s version even appeared in Extreme Justice #9 (the 90s were such a weird time for comics).

Fast forward to 2019 and the twins had a 12 issue series from the Wonder Comics imprint which started as a 6 issue series, but was increased to 12 because of its popularity.

Outside of comics, they have appears in Teen Titans Go and also live action in Smallville.

The challenge this week is to select your favorite era and create art with Zan, Jayna and/or Gleek. 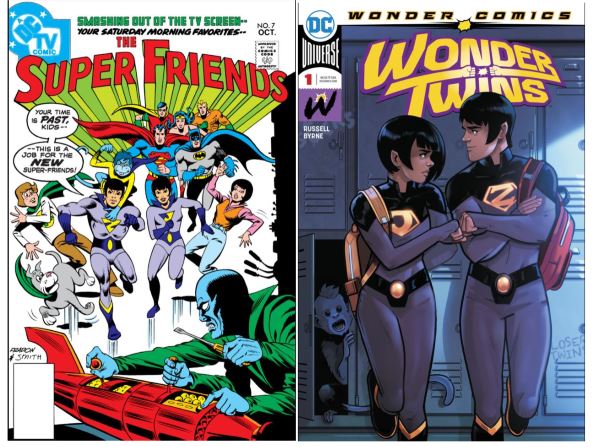 Due Date: July 17, 2021
Submit: Post your final work here.
Works-In-Progress should be shared in this thread.

Interesting. I will have to think on this one while I complete last weeks.

I thought this was a typo, but then I realized: Gleek is money.