Hi @DCFanArtClub! Since participation has been way down over the past few weeks, I thought I’d try something different.

We will put the weekly topics on hold for a while and try a month long spotlight. The idea is to select a topic that has a lot to choose from and to allow folks enough time to participate. I know weekly deadlines can turn into a grind so let’s see if this helps.

As for a topic with a lot to choose from, the Legion of Super-Heroes is perfect for that. Jon Kent was going to be the fourth of the DC Pride events and since he’s here too, we are not skipping anything.

The latest version of the Legion is from Brian Bendis and Ryan Sook in 2019 (and still appearing in the JLA vs LSH series going on now). This one has Jon Kent taking up the traditional Superboy role. 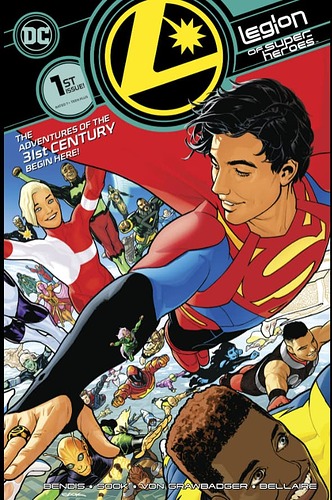 Historically, however, there have been many versions of the Legion, both with and without Superboy. 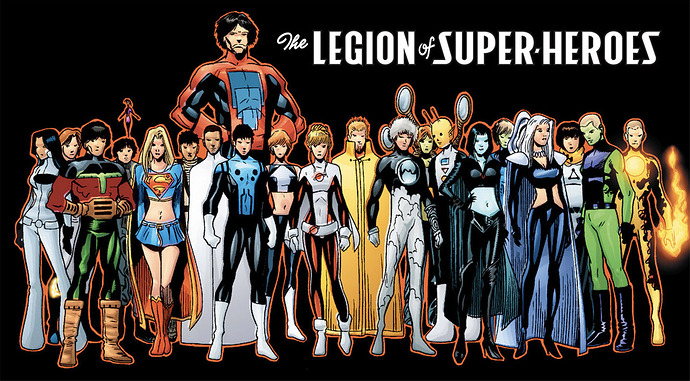 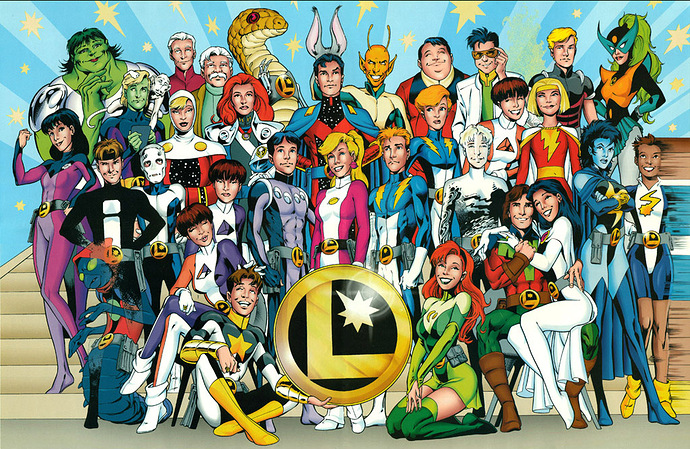 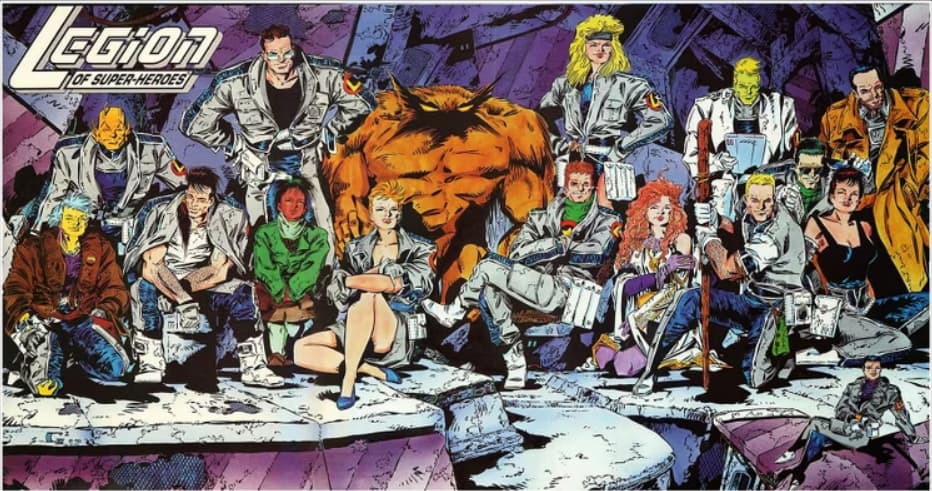 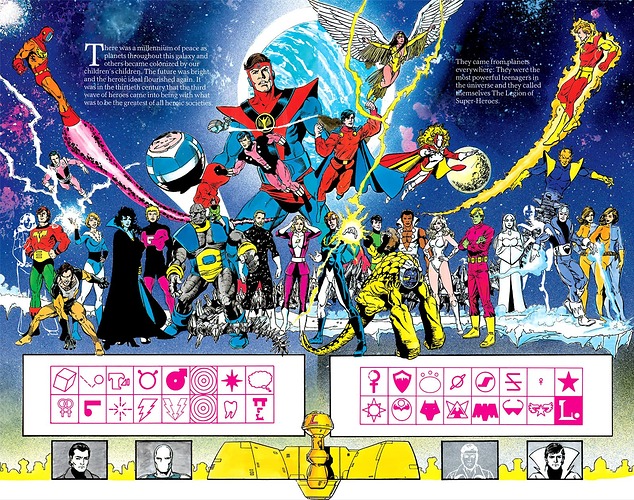 And even the Animated Legion 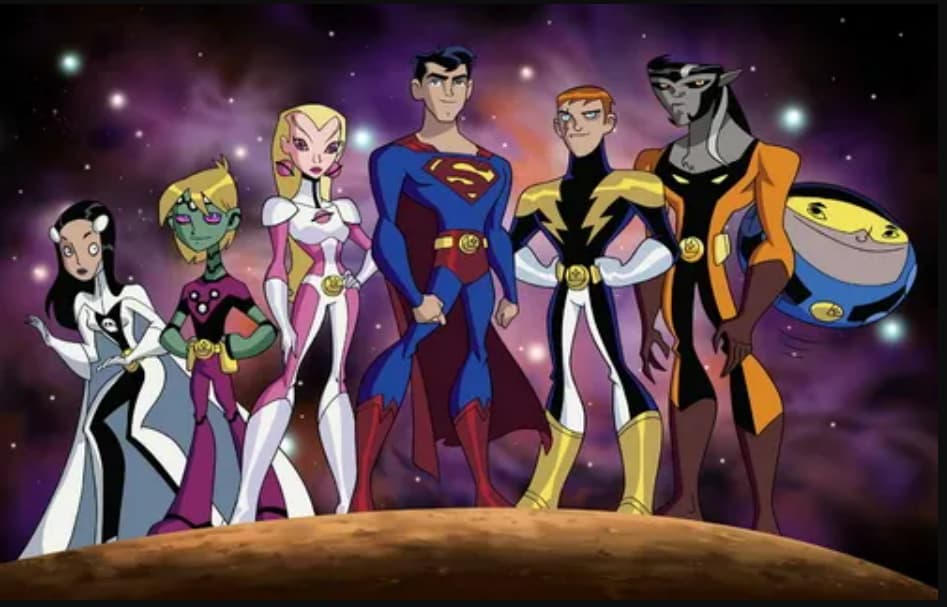 Take a look and see what interests you. Come back anytime during the month of July and post your version of the Legion!

Due Date: July 31, 2022
Discussion, works-in-progress and final submission all in the thread below.

Interesting with the monthly. Haven’t made a month long piece in a while so definitely exited to go for it. And the legion is cool topic. Just finishing up the Aqua week and then definitely starting this.

I know I run the risk of ‘out of sight, out of mind’, but I’m feeling optimistic that more time is just what people need.

And if you wanted to draw weekly, there certainly are enough members of the Legion to go around

I, for one, appreciate the monthly option. Lately I just don’t have the time to do weekly and get them finished on time. As it is, my Aquaman week drawing is barely halfway done, but hoping with the long weekend I can finish it.

Our version of the Legion? “Muwahahahaaa!” Drawing here is to help bring my thoughts to life and this perfect for where I’m at!

My only critique on these pics is that no names are ever mentioned. It would help. Even Facebook etc… has an option of scrolling over a face to see the name.

With the upcoming busyness of July with my own vacation in the middle this works out perfectly. I have an idea for one era of the Legion and will just see if I have time for my other more ambitious idea

We had a sudden death in the family and i havent picked up a pencil in the last 3 weeks. But i think ill try and work on this challenge, especially timberwolf the lil angsty guy. But just wanted to let you know @JKoco17 i appreciate ALL the hard work you put into these challenges and keeping the space alive to express our love of these characters. You really are great!!

So sorry to hear of your loss. Hang in there and know that the door is always open here.

I decided to go with Gates! Introduced in 1995, he was the Legion’s teleporter during that era. 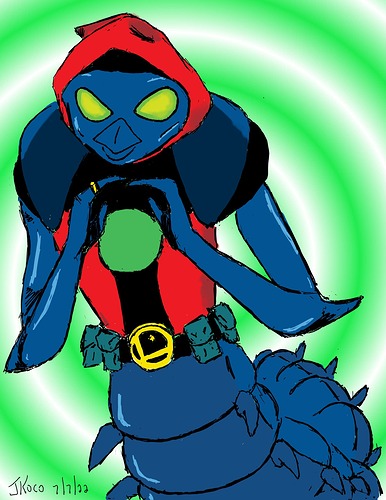 You forgot one of the most important eras of the Legion: the Smallville live action version! They even brought in Geoff Johns to pen the episode featuring the debut in the Smallville world.
Here I recreate the famous Superboy rejection cover with their Smallville equivalent. 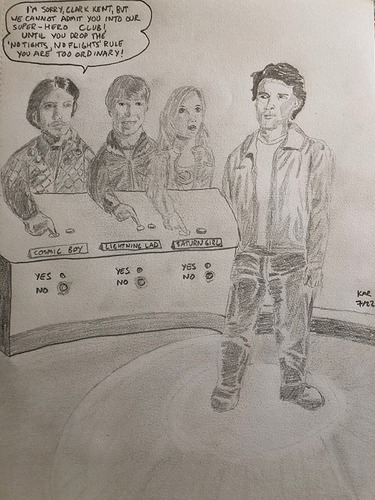 All I can say is great job. Perfect colors and pose!

“No tights no flights” lmao!! Great job, love it!

Thanks Rob! Insect characters are fun since there aren’t too many pesky rules of anatomy.

This is a very cool idea and nice execution!

Truth be told, I’ve never actually watched an episode of Smallville. I’ve seen that they had a lot of guest stars in the later seasons (like the JSA and wasn’t there a Green Arrow), but I totally forgot the Legion made an appearance.

Any other shows have any live action Legion? I suppose XS is on the Flash and that kinda counts.

I’m sorry to hear about the loss in your family. Take all the time you need we we will still be here

Looks cool! There really are a lot of members and I’m used to just seeing the humanoid ones. I love the coloring and there is almost a Green Lantern quality.

I know on the show he met them long before he became Superman and this mantra stuck with me as a way for them to say he was too ordinary like the original cover.

Thanks! I was worried how’d it looked but once I realized all three that were on cover were in episode it clicked.
Gasp! Never seen an episode? It’s ok I got into the show from the start even stuck with it through some slow seasons but liked how they did different takes on the superheroes even getting a pre Justice League. Justin Hartley was one of the best Green Arrows, full of humor but also loyal and caring. Alan Ritchson who played Hawk on Titans played Aquaman. They used Bart Allen as their Flash.
Yes XS is on the Flash so I’d say it counts but they don’t seem to mention the Legion and she’s only from 2049.

Yeah, Smallville started a bit before streaming became the norm ( at least for me) and once I missed the first season, I never tried to catch up.

I’ve seen those pics of Alan Ritchson as Aquaman, but he’s got a perfect jawline to wear a super hero mask. He looked great as Hawk

I heard a rumor more Legion art may be arriving soon.