Endless Winter has finally begun here on DC Universe Infinite! The first issue of the nine issue event that started in December, 2020 has arrived here on DCUI and it’s time for those of us that have been patient to dive in and join the fun! 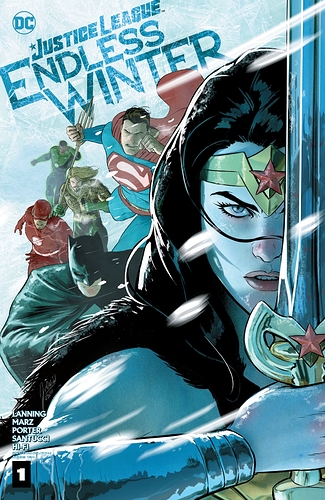 It all begins with ‘Justice League: Endless Winter Special #1’ which was promoted with:

“Endless Winter” chapter one! The crossover event of the season begins here! The Justice League encounters an extinction-level global storm brewing at the former site of the Fortress of Solitude. Enter the Frost King, a monster mad with power with an army at his command! What devastating mystery lies in his past? And how does he tied to Queen Hippolyta, Swamp Thing, Viking Prince, and their reluctant ally, Black Adam? Two timelines will reveal further clues and secrets throughout each chapter of this blockbuster tale!

What a great cover by Mikel Janin. Not only do you feel cold just looking at it but you see six members of the Justice League ready to fight and peep the glimpse of their foe in this battle in the reflection on Wonder Woman’s sword! Just beautiful artwork.

Now that you know the particulars go on and read this issue and then come back for discussion and to share your thoughts!

Ok, now that you’re back…what did you think of this first issue? What was your favorite moment/panel? Which member of this Justice League is your favorite? Which past member of the Justice League that isn’t included in this version do you think would be the best addition to this team? Reminder - if your answer to any of this includes a spoiler be sure to use the spoiler shield to protect others who may not have read the issue yet.

I’ve been looking forward to this hitting DCUI for, well, six months and I’m so excited it’s finally here (could you tell?

). Hope you enjoyed reading it and looking forward to discussing it with y’all!

To all moderators or those that are wondering - I know that there was already a topic dedicated to discussion of this event but that one was months ago for people that bought the books and read it back in December and January. That thread, I’m guessing, would be very tough to join/read now without getting spoilers for what’s to come. A quick scroll through that thread showed there wasn’t a single spoiler shield in all the posts so I started this one for anyone that, like me, is just now starting to read the event and wants to discuss it without getting anything spoiled.

I really enjoyed it and it set up the story and the scenario well. Looking forward to The Flash #767 and Superman: Endless Winter Special #1 next week to see where it goes from here!

This is one of my favorite DC events in recent years. It’s very polished, fun, and has some nice surprises on the road to Infinite Frontier!

I’ve read The Flash #767 and Superman: Endless Winter Special #1 and am really enjoying this event so far. One-third of the way into it and we have a foe the Justice League seems helpless to stop, we have hints that Black Adam has vanquished this foe in the past and may be holding back on how to stop it again and we have a new hero - Viking Prince.

Just about to dive into the the next three issues - Aquaman #66, Justice League #58 and Teen Titans: Endless Winter Special #1. These ought to be the meat and potatoes of the story leading up to next week’s conclusion!

Just a bit of history:

Hey @LukashCartoon.74777, welcome back to the community! Thanks for the mini-history lesson, it’s always good to learn more about the old and new heroes joining us.

Feel free to let the moderator team know if you need anything.

I skimmed this thread really quick and didn’t see an answer to this, but is there a list of the reading order for this somewhere? I want to read it. I just want to make sure I read it in the right order.

Prelude (Not part of the actual event but parts in these books will give you some background on what happens in Endless Winter):