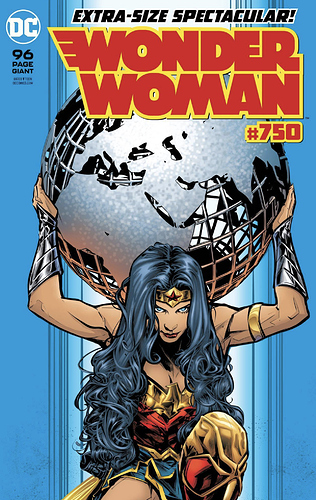 This book is full of great stories, artists and writers, making it hard to pick our favorite page.

Did you pick up a copy? What did you think of it and what were some of your favorite parts?
Let us know below and then tune in on Wednesday, 1/29 to see if great minds think alike

Book of the Week for me (and this week had a pretty rad crop of books)!

I’m still making my way through it, but so far, my favorite story was Gail Simone’s “From Small Things, Mama”. Good writing with nice, vibrant art by Colleen Doran.

My favorite pinup so far is Jose Luis Garcia Lopez’s piece. That man is a living legend, and then some.

One of the many great things about Wonder Woman is that she is a warrior who believes in mercy and redemption. The Silver Swan story was a perfect example of her ability to kick someone’s butt and care about their well being at the same time.

I enjoyed the variety of takes and tones on Diana and her world offered in this issue. Nice to see a common thread linking all the stories together, which in my opinion is Diana’s compassion. It shows even when she’s fighting Ares, The God of War, reminding him what she fights for, despite him.

My favorite story of the bunch though has to be the first one, the finale for the current story arc, The Wild Hunt. Not only does the story emphasize Diana’s compassion, even towards her arch nemesis, Cheetah, but it also contrasts two themes that I believe are core to Wonder Woman stories: submission and freedom of choice. Cheetah submits to the power of the Lasso, to the Truth…and later Wonder Woman chooses to define her own mission, which is again dedicated to the Truth…in lieu of letting Hera define it for her. A powerful, action packed story, and a great new beginning for Wonder Woman.

I hadn’t read any of the Wild Hunt arc prior to #750, but I was able to enjoy and understand that portion of the book just fine. I’m glad Silencer will endure.

Having completed the issue, I still stand by Gail Simone’s piece as my favorite story. Scott Snyder’s bit was entertaining as well.