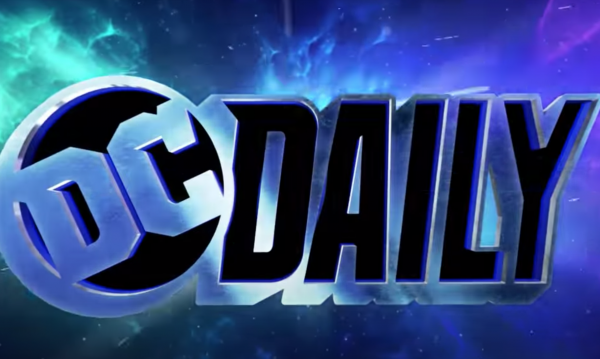 The DC Universe streaming service has canceled DC Daily, according to sources. The show featured a range of hosts, including Clarke Wolfe and Samm Levine.

Collider is reporting that DC Daily has been canceled due to budgetary problems. Another DC Universe exclusive canceled unfortunately.

I would like a mod to address this, please. Before it goes any further than speculation.
@BestBeastBoy

It’s not speculation, unfortunately. DC Universe provided a statement to Collider directly, and they’re also one of the more reliable sources for news like this. I’m very curious to hopefully find out more details behind why this decision was made, especially considering how surprising it is, but we sadly can’t say it’s just a rumor

Yep, the article was updated with a comment from DC saying July 3rd’s episode will be DC Daily’s last.

Don’t scare me please. Why would they cancel it? With over 400 episodes I would think they’re doing good.

And we just got the Watchtower update, too

Dear, Dear DC Universe Community, After more than 400 episodes, DC Daily will air its final broadcast on Friday, July 3rd. This year has brought more challenges than the show could overcome. DC Daily does want to thank you, all the fans, and talent and hosts for bringing this show to life. It’s been a fun ride. Please be sure join in on Friday, July 3rd for our final episode. Sincerely, DC Daily

I can see how the production costs due to the pandemic could be a big problem. Let’s face it. When WB announced all filming was halted, there was concern that DC Daily would stop then and there. But, they didn’t and put in a Herculean effort to keep it going.

All I can say is, A huge thank you to @DCDaily . Your work and sense of community has been awesome. Hopefully you will return in some capacity…DC Weekly perhaps?? In any case you all both in front and behind the camera, you will be missed.

Also, DC Daily wasn’t an exclusive either. This was a Rooster Teeth production which could also be found on their streaming service. I’m sure there’s a lot to it.

Is there a way a fans can save the show like fans of Star Trek did back in 1968? #SaveDCDaily!

The one thing that kept me coming here everyday.

Why not just go to YouTube then? I don’t mean to seem confrontational, but it just seems like a weird reason to come to DC Universe.

I remember when DC Daily was on Youtube only! Sometimes they have great shows/segments but lately, I have not been too interested in many of the episodes. When it came to reviews or discussions, I was pretty let down that nothing felt objective. It was always “What did you like about X” or “So, why was X AMAZING” and not even diving into any criticism. The cast was a pretty cool group of people although I wonder where Brian went lol.

What is the a lore of your streaming service why don’t you just fold it in to HBO max. Yes it was on YouTube but not the entire show. Content is king and the only thing you have on there is pretty much everything I already have on DVD to begin with. I thought for sure when I bought this subscription with DC Universe it’s just meant that all your DC shows and movies would be there. Now one of the best things you have going for the streaming service and now you’re taking it away is it really worth my $7.99 a month maybe I should rethink and I think everybody out there should do the same!

Something to point out: DC Universe isn’t a streaming service. Yes, it has streaming as part of their service but it’s not exclusively streaming.

You’re right, content is king and not only are there the original shows, but there’s also the complete seasons of older shows/animated series. In the case of Batman Beyond and Batman: The Animated Series, those have been remastered in HD. There is also over twenty thousand comics on here (hence why it’s not just a streaming service)

You said you thought all the shows and movies were going to be on here, but they never said that was going to be the case. It was never stated in any official press release, in any of the marketing or promotion for DC Universe. I can understand that’s frustrating but that comes down to research more than anything. It’s a little difficult to hold a service to the fire for something they never promised.

Like I said, I totally understand your frustration but said frustration seems to be based on inaccurate information.

I am very disappointed to see DC Daily ending. They show literally launched the entire platform; I made it part of my daily ritual, watching after I got home from work. I have become attached to the hosts, people who are funny and fun to listen to. Originally I only streamed DC Universe content, but during this pandemic I began reading the comics library. DC Daily provided me with analysis of great stories I should read. I wouldn’t have known about many of them without DC Daily to talk about them. Hell, I even started listening to the DC Daily Podcast, which is partly rehashing interviews I’ve already watched with an extra couple minutes in each. I don’t know if DC universe intends to replace the show. But this decision feels as much as anything like the beginning of the end of the platform as we know it.

I literally am upset this is getting cancelled. I was just starting to really like the daily’s with these awesome people. I really enjoyed them.z actually, from the recent Wonder Woman 5K, it got me to sign up for it because now I knew about it. Such a shame…I hope something comes in it’s fall.

Me too… DC daily became my family who loves and brought me DC Intel during my treadmill runs. The podcast also became a part of my morning jog around the neighborhood. Thank You DC Daily for helping me lose 20 lbs. I am now going to eat a tub of ice cream and a dozen donuts to celebrate an excellent program… From my sofa…

Since its getting cancelled can we have the missing episodes then