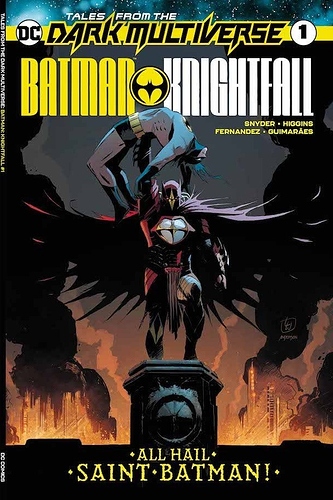 In today’s episode of DC Daily, we discussed Tales From the Dark Multiverse: Batman Knightfall. Thirty years after Bruce Wayne was broken and failed to take back the mantle of the Bat, Jean-Paul Valley, now known as Saint Batman, has turned Gotham into the city of his dreams. In his new order, killing has become commonplace and criminals live in constant fear—all in the name of justice. But just when all seems lost, a new hope for Gotham City rises…the son of Bane!

One of the things we discussed is the fate of Bruce Wayne (Holy Saint Batman!) and we wanted to know your thoughts!

So, what Azrael does to Bruce Wayne is terrifying, but who Bruce becomes is just as horrifying! What do you think of this Bruce Wayne? Tell us in the comments below!

Where can I read it?

I thought it was an awesome take that really fit well w/in the messed up storytelling of the Dark Multiverse. Even though everything’s fated to go wrong in those worlds, Bruce’s actions make kind of make sense in a weird way considering that Azrael kept him like that for 30 years. Keeping him barely alive and torturing him like that for so long would drive even the best of us to an incredibly dark place, and it makes me wonder what would happen to the main universe Batman if he had to endure something like that

I agree with DC Daily crew, we need more Son of Bane! What Azrael does to Bruce is just brutal, def a creepy panel. Bruce making the choice to embrace the darkness was crazy! It was a dope read. Gotta catch up with the OG now. I also picked up The Death of Superman, looking forward to reading it!

Local Comic Book Shop or if you do digital try ComiXology

I haven’t read this tale of the DM, but if and when DCD discusses The Death of Superman installment, I’ll happily jump in on that discussion.