But there’s more to get hyped about! We’re excited to debut, exclusively here on DC Community, the black armband featuring The Death of Superman 30th Anniversary logo that is included in the premium polybag variant. As a tribute to the black armband released 30 years ago, readers can wear the new armband in solidarity with the passing of one of our greatest heroes. 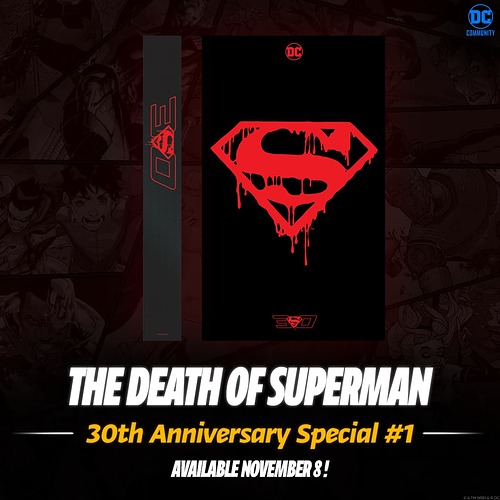 Get excited for some incredible new stories from the team behind the historic The Death of Superman, in just a few months! To celebrate the special anniversary of this genre-defining moment, DC has reunited the original creative teams of Dan Jurgens and Brett Breeding; Roger Stern and Butch Guice; Louise Simonson and Jon Bogdanove; and Jerry Ordway and Tom Grummett for The Death of Superman 30th Anniversary Special #1 . Available at comic shops on November 8, The Death of Superman 30th Anniversary Special #1 features four all-new stories that explore the lasting impact that Clark’s death had on his family and friends as well as nine pinups and variant covers by some of the top names in comics.

Here’s a look at some of the new stories that focus on how Superman’s allies reacted to his iconic fight with Doomsday:

For more on the Death of Superman 30th Anniversary Special, head over to the DC Blog!

Are you excited for this historic Superman Anniversary special? Let us know in this thread!

Are you excited for this historic Superman Anniversary special?

As Gimli said in The Two Towers, “YEEES!”

Great Rao, I will be at my comic store on 11/8 right as they open the doors, and not just for The New Golden Age one-shot, but especially for the DOS Special.

While I’m an ardent Superman geek, I am saying with complete objectivity that I think the DOS Special will earn the One-Shot of The Year award.

Make mine Superman, especially on 11/8.

The LOTR movies are my top three favorite movies of all time (Return being #1, Towers 2 and Fellowship 3).

Excited for this and about to order some of the variants.

Bit of a dumb question: The armband comes in the bag, yeah? Is the bag resealable? You guys obviously see where I’m going with this.

Is the bag resealable?

If its like the original bagged edition, it won’t be. Once its opened, its open.

If it is like the original, then you can easily fold the upper part of the bag over the book, so as to protect it and anything else inside.

Thank you. Little me wasn’t into comics, so not familiar with how it looked like. Thinking of ordering two, one to keep sealed. Kinda silly, I know.

Little me wasn’t into comics, so not familiar with how it looked like.

If its any consolation, I got my bagged copy of Superman #75 in 2016. I’d never had it before that, as I had my newsstand copy of #75 from my childhood, along with the original and '16 trade runs of Death/Return, so I didn’t see a need to get the bagged edition.

It was only when my then-regular comic store had it on their Hot Wall for a good price that I snagged the bagged edition as a Stanley Goodspeed-style “Oh, well, why not?” impulse purchase.

Thinking of ordering two, one to keep sealed. Kinda silly, I know.

Not silly at all. You know how I said my then-regular store had the bagged edition on their Hot Wall in '16?

I bought the copy next to it too, so as to have one opened and one sealed.

Thank you. Little me wasn’t into comics, so not familiar with how it looked like. Thinking of ordering two, one to keep sealed. Kinda silly, I know.

Not silly at all! But I just checked with my team, and confirmed that the bag is unfortunately not resealable.

I have a confession. As a DC fan, I have never read Death of Superman. I know, I should be ashamed lol.

I know how the story goes though. But now that the 30th anniversary is here, I’m hoping I can finally get around to it

I have a confession. As a DC fan, I have never read Death of Superman.

now that the 30th anniversary is here, I’m hoping I can finally get around to it

cough Keep your eyes on The Modern Age Superman Club in the coming weeks and months. cough

Keep it on the downlow, though.

No shaming in this house!

Glad you have this chance to get into it though–enjoy!

I first read it in trade form. $4.95 cover price. Then I got a young readers novel from a Scholastic flyer. Alex Ross cover art. A while later, my aunt took me to the outlet mall in Gaffney, and while I was browsing the book store there, they had the hardcover Death of Superman and Knightfall novels and bought both. It wasn’t until I was walking around the flea market that I found Superman #75, the news stand edition for $8, up until then, my most expensive comic purchase.

I somehow missed the whole Death portion, but I jumped on the whole Reign of the Supermen issues. I read the Death later in trade. It was around the time I started to transition from collecting sports cards to buying comics. They had a mini card shop in the local grocery store and the owner started stocking comics.

I’m excited for the Anniversary Special even if makes me feel old.

Poor Superman, I really do miss him, he really was a great hero.

That’s a awesome merchandise stuff! @Moderators will this also be in the DC shop store to buy?

It is pretty cool, right? For now, it looks like it will exclusively be sold in comic book shops & bookstores, but we’ll let you know if that changes!

Let’s be honest: DC’s marketing department wants people to buy the two copies, one for the armband or to read and one to keep sealed.

Is it silly? Given that I even will buy Funkos (I’ll defend to the death my Lucy Davis especially since she’s holding Diana’s shield and sword in that one AND because goddess forbid that DC will ever otherwise make any kind of Etta Candy ANYTHING), that’s not for me to say.