The first episode of the new DC Community Audio Interview Series is here! 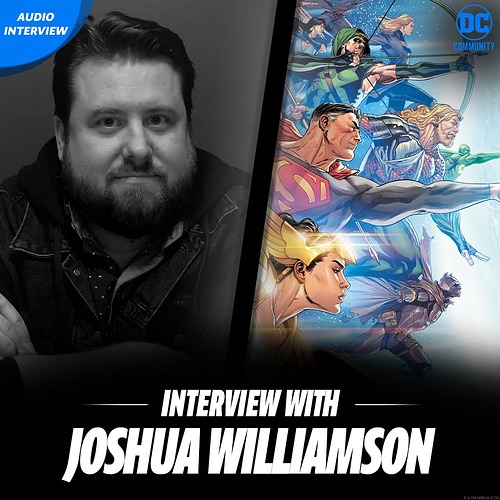 Join DC Comics Executive Editor, Ben Abernathy, and Dark Crisis writer Joshua Williamson as they dive into all of your burning questions! The pair discuss Josh’s approach to writing, his favorite books and characters, and some exciting teases for what’s to come in the Dark Crisis saga. Tune in to this fantastic interview, and read along with the transcript below!

If you enjoy this new audio content, let us know! We have exciting plans for upcoming episodes of the DC Community Audio Interview Series, so stay tuned for more soon.

Just started listening to this now and it sounds fantastic! Love this idea and what a great first guest!

I’m so glad you’re enjoying it! And thanks for submitting a question for Josh!

It’s so much more conversational and thourough than a text chat/interview is. The follow-up questions and discussions are great and add to it a lot!

You get more questions answer by talking then writing, I really like this idea so that a person with question has a good chance at getting answer.

Got my Road to Dark Crisis preparation reading list from Joshua Williamson himself!

Can’t get much better than that!

Perfect DC star to roll this out with!

I appreciate the answers we got today and how thoughtful and informative they were!

This was fantastic. Was a treat hearing Ben Abernathy read our questions and hear Joshua Williamson’s answers to them, and get a sense of their reactions to the questions, something you don’t quite get from the text only format. Thank you for this, DC Community

Kinda disappointed that I showed up to the party too late. I had some questions about the event. I hope he does another interview.

I enjoyed this format. The questions become more conversation starters than just basic answers. It feels more alive, if you will.

I can’t wait for more of these and I will echo @moro with Phillip Kennedy Johnson!

I love when captions don’t match. I wonder how much more powerful the Greenland Corps is compared to Green Lantern Corps.

Yay. How nice it is to hear an interview where the sound quality is top notch. Too often when we get creator interviews the sound is not that good

I finally got to listen to this today and it was awesome to hear an answer to my question, but what was more exciting was hearing a lively discussion about this writers process of collaboration with artists. We wouldn’t get this type of communication from the forum chats we have had in the past, but with this audio type of interview we got a very nice deeper dive. Love this and I look forward to hopefully more of these.

This was awesome! Love this format! My question was asked first, which is pretty fantastic!

Having PKJ do an interview in time for January’s Action Comics #1051 and the new Superman line would be a great tie-in opportunity for the books and, most importantly, fans.

This is great! I’m always excited to hear from the creators! I’d love to hear some creators for DCs get on here too and talk about their memories of working on some of their favorite stories (like Marc Wolfman, Jerry Ordway, Kevin Nowlan for example).

So who’s on deck for episode 2?

So who’s on deck for episode 2?

We have a few guests in the works, including a BIG one for December…stay tuned!