I’m in the need of help in regards to some sort of chronology or massive long-form retrospective of that era since going back to read every single comic would be nightmarish, since I would also need to figure out a proper timeline of sorts in order to go over everything, it’s part of my own initiative of sorts, NRE-Era III Content. 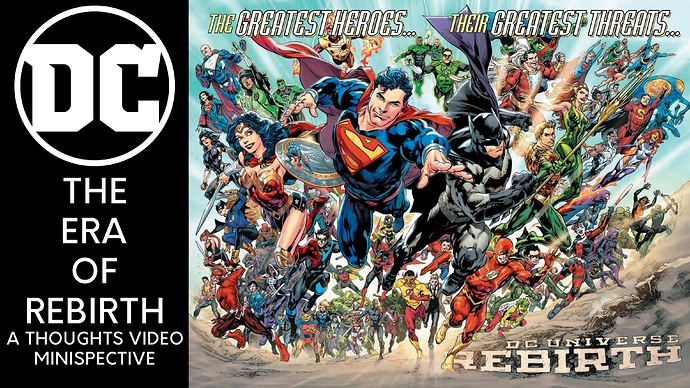 @Nathan.Payson organized a huge Rebirth chronology project some time ago that may be useful to you. He’s the guy you wanna see.

@HubCityQuestion Yeah, mysterious stranger told me, I messaged him, right now awaiting for a response from him.

But it doesn’t hurt to look at other perspectives.

I haven’t updated this in a couple of months, but here it is: Rebirth Reading Order - Google Docs

Basically, I stopped around year of the villain as this was designed to follow the DC Universe Comics.

Thanks man, do you ever intend to continue it? And if so, what’s the stopping point?

I might. I stopped continuing it, because I realized how disappointing Rebirth “Phase 2” is. Very few of the titles are good, and it becomes REALLY hard to explain/create a working timeline because DC basically said “Keeping a timeline is too hard to do, so let’s just ignore it!!” Somehow, Detective Comics and City of Bane are supposed to happen at the same time, and the heroes lose at the end of year of the villain resulting in death metal, but somehow after year of the villain, Joker War is also supposed to happen? Trying to piece this story together is near impossible and MAKES NO SENSE, after Summer of Events. Anyone on the Fans of DC Universe Discord has seen me attempt to explain it multiple times (Using the idea that year of the villain split the timeline in 3, but even that doesn’t make ANY sense. Bendis’s story seems to contradict King’s and Snyder’s story contradicts EVERYONE ELSE’S. Books that set up Death Metal like Batman/Superman: The Infected make ZERO sense in arc 2 which takes place after it, but also hides it’s existence? It genuinely doesn’t make any sense. They screwed up the timeline SO badly, that I am just waiting for the next reboot to start this whole thing again.

Understandable, they did have plans for 5G Reboot, but Dido had his own twisted vision such as ridding aging and ridding of establish characters for some nonsense.

They also said it was to also include a proper timeline, which while good, still wouldn’t fix it because they omit certain details such as Stephanie Brown’s time as Batgirl.

Actually, I was really excited for what I was hearing about 5G. I felt like they were doing enough really new things to excite me. The clean easy to read timeline actually was probably good for a lot of different reasons. It becomes accessible to new readers while bringing back stuff fans liked.

I personally want comics to be paced in a way where every year feels like the world and story has grown in significant ways. I want a timeline that can’t just be reversed for convenience. I want deaths to matter and character to development to stick, and I thought the idea of aging was really good for that. If you like the old guys, you got 80 years of comics about them. Let us enjoy new stories and ideas. I’m not going to ger into this more, but 5G excited me SO MUCH.

Really as an idea, I had no problem with the 5G as a concept, the problem really for me was how well could Dan put aside certain feelings for characters such as Wally and Dick Grayson along with legacy characters for a better DCU.

His New 52, while having some cool books and moments, ultimately was everything Dan Didio wanted out of the DCU as opposed what fans and writers wanted.