DC Comics Subscription - Anyone Use This?

While reading Justice League #31 I got to the final page and saw this on the bottom:

If you can’t read it there’s a part that says:

I had never heard of this before but I turned back to the cover and confirmed the cover price: 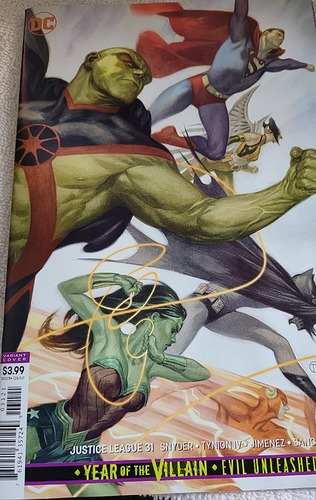 So I looked it up and, sure enough, there’s a website that allows you to subscribe to DC Comics for great discounts off the cover price! Shipping is even included if you live in the United States! If you’re around the world, though, it’s an additional $16 a year for shipping which is still less than the cover price I’m currently paying. It’s https://subscriptions.dccomics.com/ and I made an account straight away.

So I’ve now added the following to my cart:

If I bought those at my local comic shop as I was planning on doing they would cost me a total of $203.52 but through this official DC website I’ll get them for a total of $116.90 which saves me $86.62 a year which is enough to completely cover the cost of my DC Universe Infinite subscription each year and still have some left over! Plus the books are delivered to my door! Where has this been all my life?!?

Before I check out my fully loaded cart and say goodbye to my local comic shop I want to check with y’all - does anyone use this service and, if so, what has your experience been with them? Do the books show up on time compared to when they’d arrive in shops? Are the books in good condition? Can you get variant covers? Any problems you’ve had that I can’t think of now?

This seems like a great way to get physical comics, save money and maybe even get MORE comics with the money I save on the ones I would have bought at a LCS. Just wanted to check with y’all first before I made the committment.

It’s a great deal, as long as you’re not a collector who wants a specific cover and wants your comics mint/near mint. Once the comic is shipped, it might get bent.

Good to hear. Do you use them? Do the books arrive “on time” compared to when they’d arrive in shops?

I remember stumbling in this a while back, but not pulling the trigger because it was for physical copies only (I think). Don’t recall it being that much cheaper though; great deal! Would sign right away on if it included digital.

Correct - this is physical books only. As it is I’m still getting physical books from my LCS each month (Justice League because I’ll buy anything with Hawkman or Hawkgirl in it, Rorschach, Strange Adventures and any other book that looks good to me) so this is perfect as I’m getting the books I want for less money! For digital…I’ll wait the six months for them to arrive here.

Thank to you all for the feedback so far! Very much appreciated and hope more of you chime in soon!

I remember having a subscription to JLA back in 1999. They usually got to you two weeks after they came out in stores and they were sent with the flimsiest piece of cardstock-like paper in a plastic wrapping. I never had issues with the condition, though as I was reading the issues, not collecting them and there wasn’t too much damage.

I haven’t had a subscription since then but I’d like to believe the process is more refined now.

Probably better to go through Discount Comic Book Service if you have a bunch of titles. DC titles have great discounts on there and you can choose how often you want shipping. Plus they will be packed extremely well, so no worry about damage. I used to do twice a month shipping when I subscribed and the DC titles were discounted so heavily that I was able to order every Rebirth title and was still paying less than what I was paying for the smaller amount of titles I was getting at my local store.

Thanks - hadn’t heard of them before!

I checked them out and they do have great discounts - 50% off some books! - but the sticking point for me is that shipping is not included and is $7.50 a month. That’s for one shipment a month, in the fourth week of the month, so if a book came out on September 7th it wouldn’t ship to me until September 28th. If I wanted to get a shipment every two weeks it would be an additional $7.50 which is $15 a month just for shipping which pretty much eliminates the discounts.

The free shipping on Subscriptions.DCComics.Com is pretty amazing and they send each book separately the moment it’s available. That’s a big selling point for me as timeliness matters when it comes to comics - nobody likes spoilers!

I have one series right now under the DC subscription. It is nice that I don’t have to worry about buying it when it comes out. But it does take a couple weeks for it to get to me after it ships. Which is the only bad part.

I used to use them for a while. Great service and I’ve been in their brick and mortar store. Highly recommend.

As others have said, yes, it’s still a good deal, but think of it more like a magazine subscription (literally; that’s how it’s processed by the PO - periodical class) than a pull list. No bags and boards, no variant covers, no recourse if the mailman folds it to fit. Last time I had a subscription (admittedly a couple of years ago), there was a stiff paperboard wrapper that they print your address on (to avoid stickers on the book, provide a bit of protection from creasing, and mask what you’re getting from prying eyes) and that goes in a plastic slip bag. (Which is a huge improvement over the 90s when they arrived in a brown paper slip cover, or, sometimes, you just got the slip cover.)

tl/dr; great for reading, almost never miss an issue, but don’t count on it if you’re a collector

I think a third party took over fulfillment in the last 5 years or so, and there actually may be recourse now if an issue is lost or damaged - I had a couple that never arrived, and while they can’t replace it if it’s out of stock like an LCS might, they’ll at least extend your subscription. They also have some logic to auto-finish subscriptions; e.g. if you paid for a year of a book that was canceled at 7 issues, they’ll suggest a replacement based on the book and offer you credit to complete it that way. e.g. no more Teen Titans? Perhaps you’d like Robin, Son of Batman…

A few months into this and I’m enjoying getting a comic book in the mail every now and again. They take about a month to get to me from when they hit the shelves so that’s a pisser but it’s not like everyone at the store or at work is talking about the latest issue of ‘Task Force Z’ so I can avoid spoilers very easily.

So I would like to pull the trigger on Batgirls for this, but I have already bought issue #6 on preorder from Midtown comics, and am very unsure about when I should buy this, so that that I don’t either wind up with 2 of the same issue or worse yet miss an issue because I messed up the timing.

But I am definitely going to try out the Dino League & Batman Fortress.

I only have four other series I am currently getting psychical of, 3 of witch I usually want the high dollar variant covers anyway.

They’re very good on the website about telling you when a issue has shipped and what issues are upcoming so I’d go ahead and order the books you want, you’ll know what issue your subscription will start with and you can buy the issues before that from your LCS.

Glad you’re giving it a shot! I’m now getting the following through them at a deep discount:

All of my books have arrived in good condition - same as I’d have gotten them at the comic shop - and I love getting one in the mail as it’s exciting to get a book delivered to the house when you’re not expecting it. Fun to open it up and start reading without having to go anywhere.

I missed getting Dark Knight of Steel & DC vs Vampires subs, but those were 2 of the three that I am getting the variant covers on anyway, the last one being Batman Beyond: White Knight, witch I never saw offered.

I would love to get my comics from a LCS but all the ones near me have shut down because of DC breaking away from Diamond, its funny I am not even that mad about it, yes I don’t like they shut down, but when Diamond won’t send me Variants or first printing of issue #1 anyway, since I don’t live in a big city or drive a hour away to a big city, witch is just asking for an accident due to personal reason.

I really HATE Diamond and was happy DC said forget them.

So I have just been ordering from Midtown preorders for awhile now,

I am thinking about adding Danger Street as well, due to the deep discounts, I really want books like that to do really well, but I am super guilty of having it get cut due to my Budget, when I look at all the DC & other company titles I am buying, also free Shipping always helps

@keath
(no recourse if the mailman folds it to fit)

This Makes me Laugh, probably cus I don’t really care that much,

while I have never had a comic from a Sub serivces before, all the ones I have gotten from Amazon or Ebay, that say Fragile or DO NOT BEND! on them,

They might has well have said STUFF THIS SUCKER in the Mail box it’ll fit , hopefully if they think its a Magazine maybe they will just throw it at the front door & let the Cat guard it, less damage that way.