Back in the late 1960’s Alex Toth, William Hannah & Joseph Barbara created Space Ghost! The character had a moderately successful cartoon series and then in the 90’s had a talk show on Cartoon Network Space Ghost: Coast to Coast.

What about you!? Do you think DC should show more love to the Ghost with The Most!? If so, post below! 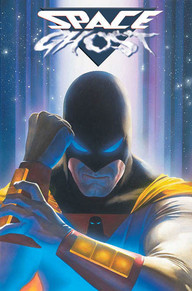 Yes! I don’t know why they haven’t already. Hell get birdman a series too.

Agreed. More Birdman books on top of Space Ghost picking up from where Future Quest Presents left off would be nice!

You know it’d be kind of cool to see Space Ghost team-up with Superman in a new one-shot. Maybe have them go up against a Despero/Zorak team-up!?