Fellow DC Comic Book Art Connoisseurs club members, hello again from our swanky room of comic book culture through the ages! Our subdued celebration the next three weeks is reflecting on the 80th anniversary this year of Hawkman / Hawkgirl and Sandman at DC comics and other DC-related media!!! 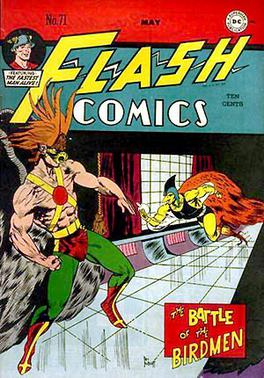 For the next three weeks, we’ll be enjoying, sharing and gazing upon the dynamic artwork since 1940 for both Hawkman / Hawkgirl and Sandman!

Vote here for your favorite art version of Hawkman through the decades: (the white button toggles between letting you vote and showing results)

Vote here for the best Sandman rendition pen and ink: 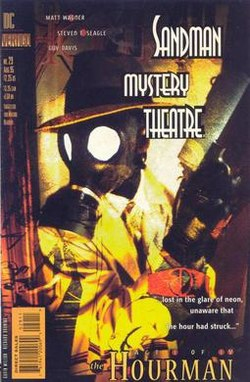 Which of these is YOUR favorite Hawkman / or Sandman artist? Show us why you feel that way in the discussion below please. As always, cover artists can be shared as well as great interior artwork

Also, if you know of other appearances of the these two JSA founding members in other books here on the great DCU, please share those pictorial memories as well.

Sandman: this character was at DC almost from the beginning, he really is celebrating 81 years at this point, as he first appeared in 1939 in DC’s New York World’s Fair Comics #1 and also Adventure Comics #40 pretty much at the same time. 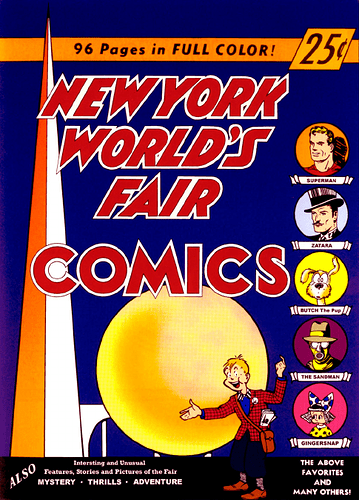 Issue #2, here on DC Universe Library, was sold for the far more reasonable 15 cents. What were they thinking with that #1???

Here is Sandman in New York World’s Fair Comics #2 in the library here: 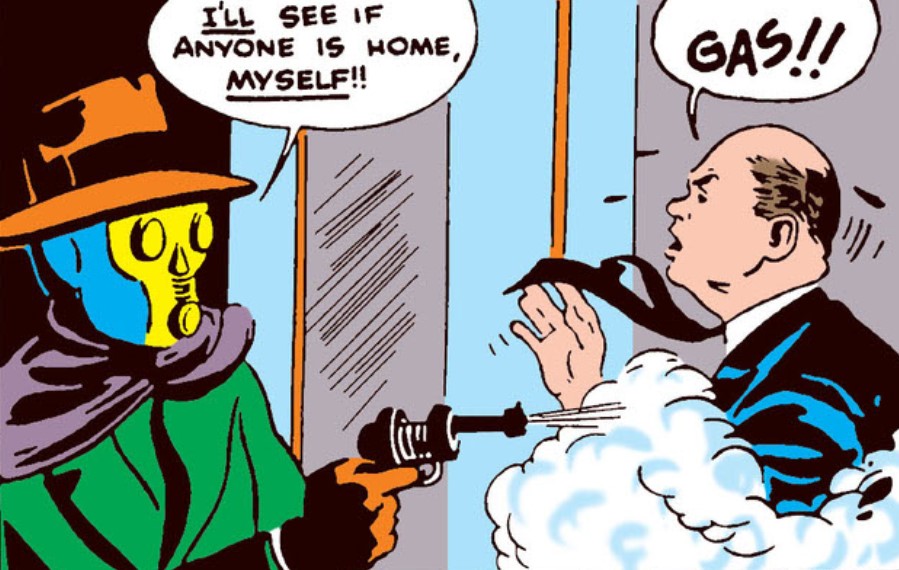 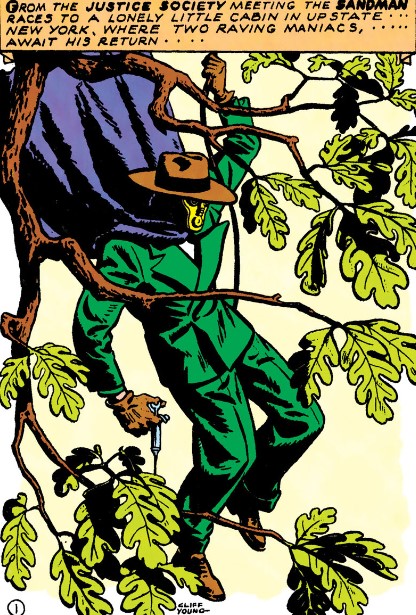 One of comic’s greatest powerhouse artists, Jack Kirby, radically changed Sandman’s look in the 1940s, and had him dump his female companion Dian for a boy named Sandy; the other artists drawing Sandman used the same costume and concept in All Star:

Thankfully, by the time my young mind first met Sandman in a 1966 issue of Justice League (#46), it was back to the gas mask and sleep gun look, jazzed up a bit for the times of course: 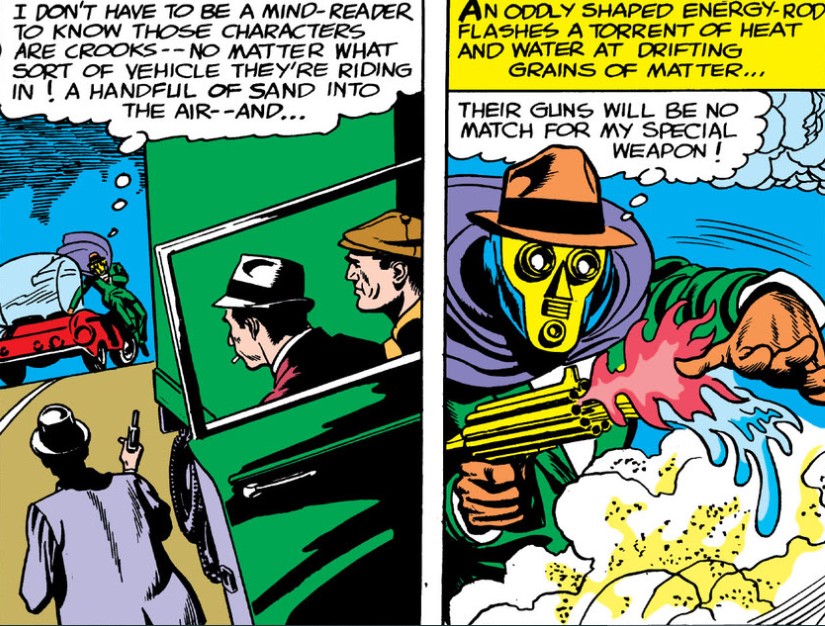 By 1949, Hawkman’s look had changed too, note the yellow head covering with no wings. 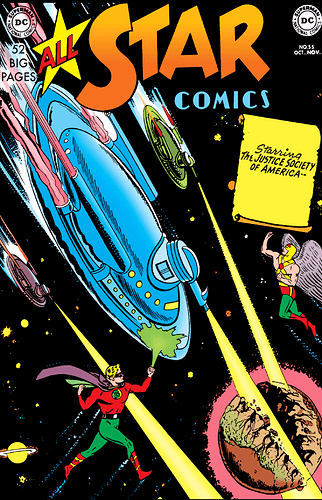 Sorry there just something about this cover that just cuts to the quick, don’t you think?

The tip of the [DC Comic Book Art Connoisseurs Club]'s hat to @RufusPentecost for this stunning and fun image of both Sandman and Hawkman going for a ride!!! 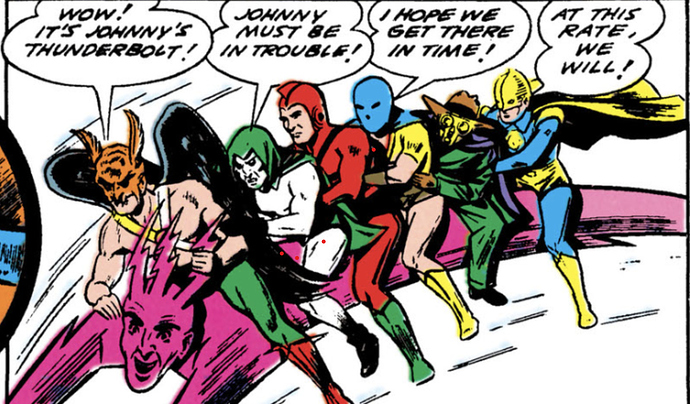 Now I have got to go find other images the show both Hawkman and Sandman together, wow!!!

Oh man. Thanks for clueing me in about this thread. I’ll keep an eye out for more of those as I continue reading through All-Star Comics.

It is funny that Sandman is one of the topics here. I am getting a serious craving to revisit my old Sandman Mystery Theatre comics. Guy Davis and Matt Wagner were such a great team on that comic.

Continuing the theme of Sandman and Hawkman in the same panel through the ages, here’s one from 1972 where they pose with the Justice League, the Seven Soldiers of Victory and the JSA! 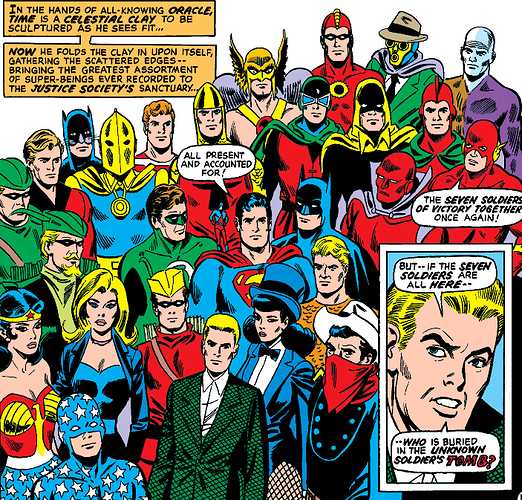