What DC blind bag collectibles do you think are cool/fun to collect? I’m aware of the Walmart Batman Black & White line and may dabble in it. Anything else? Sadly, I see very few of these in our local Walmarts or Targets. Kinda defeats the purpose of just grabbing one when you go out for groceries or whatever. Anyhow, just curious.

I’ve got a few of the Walmart Black and Whites in my office they did a nice job with them.

Check out my post down the list, i posted a picture with my black and white mini figures

I got one of the Lil Bombshells blind tins, and I think they are quite cute!

@Lexcorp, yeah I saw those. Looks cool how you have 'em displayed side by side. What are the little color figures right in front of 'em?

I like the single bagged figures from the DC Super Friends segment of Mattel’s Imaginext line.

There’s a great character variety, they’re almost always easy to find and each bag is stamped with a number that corresponds to each character so that you can be 100% certain you’re not getting duplicates.

The Batman: Black and White mini-figures are nice, but as far as their Walmart releases are concerned, DC Collectibles would do well to implement Mattel’s numbering strategy to eliminate duplication.

@moro Thanks for the vote of confidence good sir =)

@moro those are called nano metalfigs. They sell them everywhere. Wven dollar tree has them sometimes.

Sadly, the DC segment of the Jada Toys’ Nano collection ended a few months back. Nano in general hasn’t had any new releases for a while now.

The DC line was wonderful. Very nicely done and the price points were fantastic too.

Metalfigs…I know those…haven’t seen them in the brick & mortars in a while. Imaginext? Aren’t those the blocky toys that look like oversized legos? Will check it out! Thanks for the tips, everyone

Thanks @Vroom. Cute little guys! Based on what they’ve released so far, the only Trinity set I could create out of these would be an alternate one (Kingdom Come Superman, Flashpoint Wonder Woman, etc)…at least that’s what I could tell looking them up.

@moro That’s true for the single bagged Imaginext DC figures, but when you factor in the entire 11 years and counting collection of Imaginext DC goodies…you’ve got more Trinity iterations than you can shake a stick at. Classic, New 52, etc.

Speaking of Imaginext, Walmart is supposed to be getting an exclusive set of Batman figures that are comic themed. They’ll be single carded figures of different versions of Batman and the cards will each feature different comic book artwork featuring Batman in his respective suit the figure is in.

Target will be getting an exclusive Imaginext box set of comic themed Batmans, all varying from the figures Walmart is getting.

I don’t know when they’re supposed to hit, but hopefully sometime in the near future.

Will keep an eye out for sure!

So, was in Walmart last weekend…saw the Batman Black & White blind bags and decided to take a chance on 'em. Bought 5 bags, and was pleasantly surprised to only get 1 duplicate (4 unique figurines). I must say, the quality is above and beyond what I expected for these little guys. Very detailed sculpts for such small figures. Also, the Black & White scheme works a lot better than I thought it would…I actually like it. 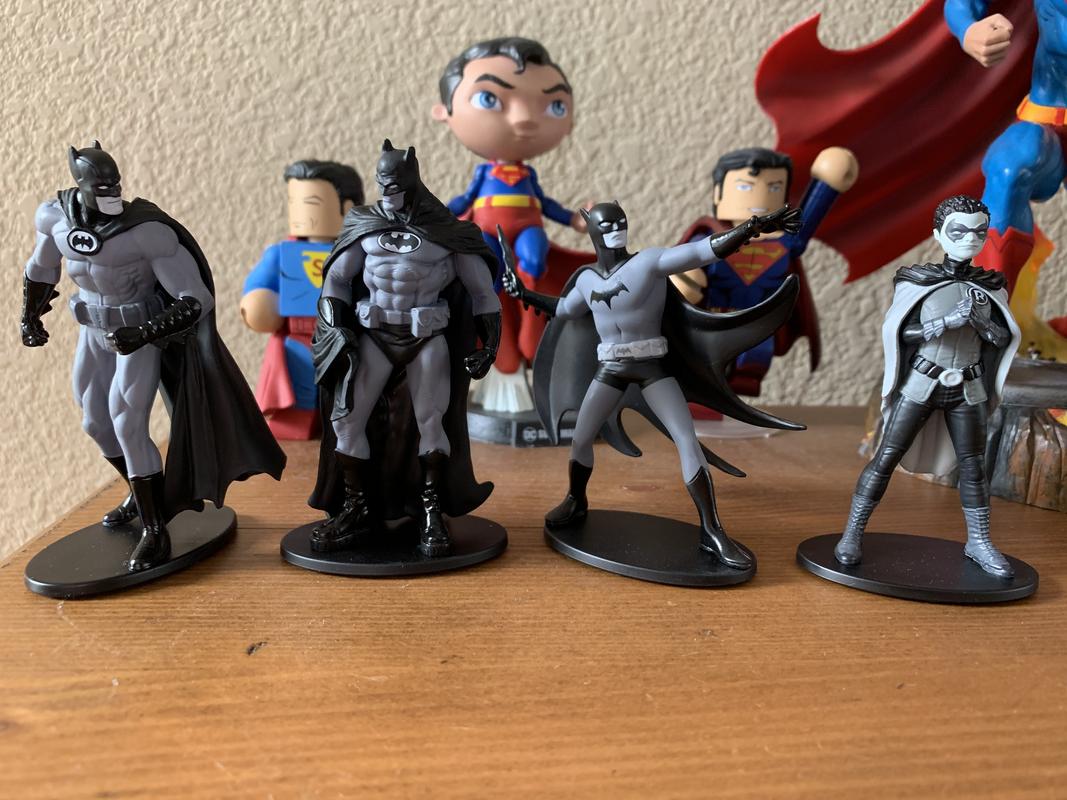 oh I want those figurines! exactly the kind of collectibles I like. Gosh my walmart sucks. they don’t have the blind bags or the comics that I keep hearing about on hear.

@Aquamon Go to Customer Service and say “Hi, here is a list of assorted Walmart exclusive products your store doesn’t carry, but that I would like to see here so that I may purchase them at this store.”

Then humorously elbow the employee and say “America’s Best Toy Shop, huh? Hoo boy! Somebody in Marketing ate one too many Stoufer’s dinners when they came up with that one, didn’t they?”

TBH, I advise you to do neither as the request through CS would likely result in no results and you obviously shouldn’t elbow someone you don’t know. Mall Santa Clauses that give you guff over your Christmas list and Easter Bunnies that poke fun at your lack of not knowing a schooner from a sailboat are the exceptions, natch.

^LOL Vroom. I should be able to get them at the walmart where I just got my place it is a much much bigger town. I should be all moved in by tmrw and will check it out. Also holy moly U-haul is not cheap. I’ve used them before but not for such a long travel!

@Aquamon In the future, use Lil’ Lugger. It’s a Simpsons Approved moving company.

Calls Lil’ Lugger
Your all set to go Mr. Aquamon. How did you hear of our company?
I was referred by Vroom.
Click
Hello? Hello? huh they hung up on me.