Heath Ledger’s Joker Voice
“Promote a new, darker adult comic line, and nobody panics because it’s all part of the plan. But show one, tiny lil shadow Bat penis and everyone loses their minds!”

I really hope I’m not the only one who thinks this backlash towards the comic is dumb. It makes me a little upset that DC gave in the complaints and took it out of further printings and digital versions. As a straight male did I want to see this? No. But I’m not going to get offended by a comic book that was clearly intended to be mature. Granted I don’t know the inter-workings of how it all played out; it could just be a marketing ploy for the first prints (happy to say I got one), but to me this feels like it was a quick “eager to please” decision of censorship. If you’re going to make a decision to show Batman’s junk, then stand by it when people don’t like. Just give a polite “F*** you, if you don’t like it read something else.”

I mostly agree. I can see why they would censor the digital copies to an extent. But, I’m pretty sure Bats doesnt appreciate you calling him tiny!

The censorship is annoying. What’s more annoying is that everyone is talking about lil’ Wayne instead of the comic itself, which was really good. Who cares if it bothers people that aren’t reading comics anyway?

All the censorship and people did was boost DC Comics sales and make this an overnight collector. Love the free market

I let a friend look through the book before i read it. They flipped through the pages then got a weird look and put the book down, i laughed my ass off when i read the book later. That book will stay on the coffee table.

I normally only buy digital or trades/special collections but the whole ‘controversy’ made me want to actually buy the first issue just to thumb my nose at people. Unfortunately I didn’t have time to drive an hour to a comic store and issues on amazon were running around $100 lol

Maybe I’m not perusing the right places but from what I’ve read, seen, and listened to, I’ve yet to hear of anyone complaining about Batman hanging dong. From my point of view it seems like DC just arbitrarily decided to go back and remove it. Who was complaining? I don’t doubt people were. Many people are idiots. But it’s a line of comics for adults and I can’t imagine there being a widespread anger over it.

The whole issue just served as more sales for the title most likely.

I really enjoyed the first issue, and I didn’t buy it because of the controversy. I just started reading Batman comics about two months ago, and although there are some really great, gritty storylines in the years past, I’m interested in even grittier versions of super heroes. Damned has scratched that itch for me, so I’ll support Black Label.

Pretty cool issue cant wait to read the next 3 and damn who would of thought a comic I’d today would spark so much attention.

Does anyone else think that one raving bum that Batman chases may be the Spectre? The three card monty girl has got to be Zatana.

People already tired of the Batawang?

I thought it was OK. Nothing really stood out for me. Other than the… cough the uhh… well you know.

Yeah, I don’t get the backlash either. It is labeled for mature readers on the back cover so its intent is clear.

The comic itself is really pretty cool. Great art, promising storyline, and outstanding presentation. Love the format and size. Makes it a little more special. Looking forward to the rest of the Black Label series as well.

Since it got removed does anyone have a photo of this page? Maybe drop a link from a post on Twitter or something. I’m really curious how bad it is haha

You can find it in google images. It isn’t that bad. It is there and you can see it, but it is an outline in shadows. The panel has a nude Batman facing the audience and shows his torso.

I just don’t get the outrage. It is marked for mature audiences and I seriously doubt that very many adults have never seen one. IMHO, much ado about nothing.

If DC deletes this post for nudity they only have their selves to blame. 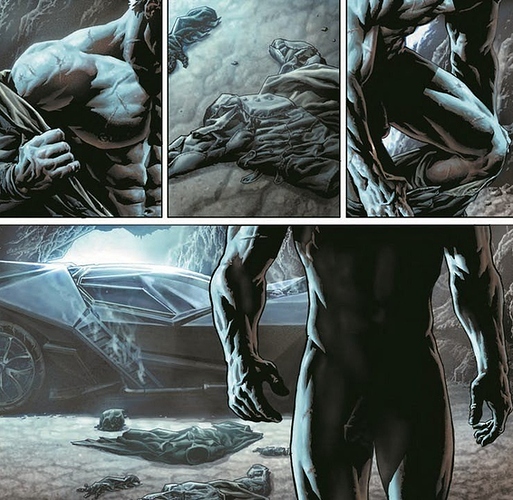