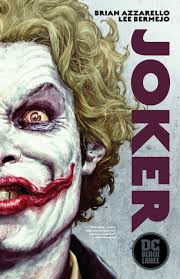 So there’s no way I’m the only one to notice/theorize this, but this subscription service comes with a community tab so I figured I’d use it.

That said, “Why is Joker on the Black Label Line, if not to promote the movie?” Simple, the protagonist of the novel, Jonny Frost, is one of the three jokers. after all, what else is DC currently using the Joker for?

Spoilers Ahead
The novel tells the story of the Joker’s driver Jonny Frost. Towards the end of the novel, Frost grows an obsession with the Joker similar to Harley Quinn. He feels as if he understands the Joker and even states he wants to be exactly like him. Making him a prime candidate to snap and take on the Joker Mantle.
Spoilers Over

We could also put everything together and say The killing Joke was also put on the line to promote three Jokers.
Making our three Jokers being,

It stands to reason that the three jokers are not going to be crazy obscure characters because they want the book to sell and in order to do so they need to appeal to general audiences. SO what better way to familiarise audiences with each character than by releasing their books.