DC Animated Club's From the Screen to the Page Week 1: Teen Titans and Stargirl 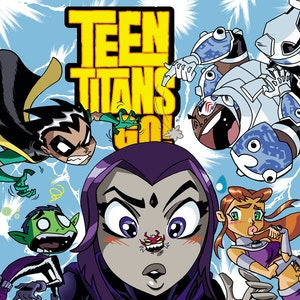 For the inaugural week of DCAC’s foray into the fantastic, four-color medium we all love so much, we’ll be looking at comics featuring the Teen Titans and Stargirl.

Also, if you haven’t already heard the word, Stargirl’s new season begins on The CW on August 10th, while Titans, Season 3 begins on HBO Max on August 12th.

Here’s what jumping from the screen to the page and in front of you, good reader!

Sidenote: The “Teen Titans Go!” series above is not affiliated with the TV series of the same name that began in 2013.

Those are the animation-inspired reads for the week, DCAC. Enjoy and as always, stay animated!

You don’t have to cry about it!

I’d go with JLU because I read most of that series as it came out, whereas I’ve only read a wee bit of Teen Titans Go. Plus, JLU is one of my all-time favorite DC TV shows (animated or otherwise) so I’m kind of biased towards it.

Regarding Stargirl in animation, did you catch her in Justice League Action?

I might have seen one episode of her, does she hangout with Batman?

Not that I remember. She was fun it, though.

Sadly, the Stargirl figure in the Justice League Action toyline was cancelled. She was going to be in a wave with The Atom, Cyborg and a variant Batman, all of which, like Stargirl, were never released.

Likewise. Like I said earlier in the thread, I read most of JLU as it came out, whereas I barely (and that’s being charitable) even glimpsed at Teen Titans Go.

Not because I felt it was beneath me or anything (on the contrary, All-Ages titles can sometimes be much better than the mainline books that feature the same characters) but it just never grabbed my four eyes, despite the fact that I really enjoyed the Teen Titans TV series as it aired on Cartoon Network, from start to finish.

As a result of this week’s reads, do you see yourself having more of an interest in tie-in comics now?

I was surprised that I enjoyed the TT TV series and their tie-in book as much as I did.

When the show debuted, I liked it, but I felt the sillier aspects took me out of the moment in certain ways. After a while I got used to it, and the comic did a great job of replicating the TV experience, while being its own unique entertainment as well.

While I really enjoy Teen Titans and Teen Titans Go!, I do want to see a Teen Titans TV series that is more consistently serious across the board. A Titans-centric spin-off from Young Justice would be perfect.

Thanks for tuning in, scoop!