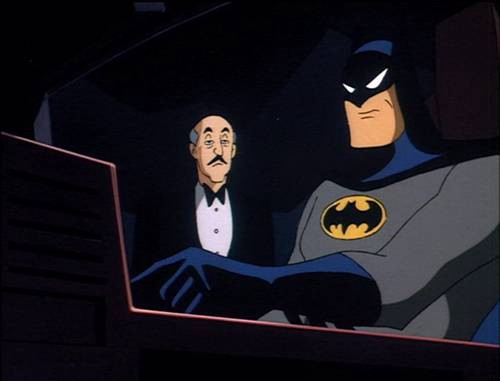 Hello everybody, since I’ve been doing a Year Of Batman The Animated Series, each week I’ve been doing characters of the week and started the Watch Along as well.
You may ask what’s a Batcave Lounge? Well I’m so glad you ask, this will be a anything topic that has to do with Batman the animated series.
One thing I forgot to do was ask some questions which will be on here as well, so here we go.

Please be sure to join DC Animated Club so you won’t miss a thing.

Hello everybody, here’s my Answer to my questions…

When Did you first watch Batman The Animated Series? I watched it when it first aired, starting with the series premiere on September 5 1992.
What is your favorite episodes? I’d have to go with “Heart of Ice,” which transformed a goofy, old Batman villain into a tragic figure, “Joker’s Favor,” “The Cat and the Claw” parts 1 and 2, and “The Strange Secret of Bruce Wayne.”
Who’s your favorite character? Batman, followed by Alfred and The Joker.
From The Batman Adventures to Batman & Robin Adventures, which comic book is your favorite? The Batman Adventures Special: Mad Love.
What’s your favorite thing about Batman The Animated Series? Oh, I can’t settle on one thing. I love the look of the show. It’s like Batman has done by the Fleischers. And then I think it was very well written. Ultimately, I think it captured Batman better than any work in any medium besides comic books. None of the movies compare to it.

When Did you first watch Batman The Animated Series?

I had caught few episodes when BTAS first premiered, but I didn’t have a TV for most of the 80s & 90s. I had heard so many great reviews that I took a chance and bought the entire series box set on DVD. My son and I watched all the episodes in the early 2000s and it hooked me on the DCAU.

What is your favorite episodes?

It is tough to pick just one. Being a Ra’s Al Ghul fan, The Demon’s Quest Parts I & II are great, but I really love Showdown with the son of Ra’s and Jonah Hex which showed Ra’s’ love for his son.

After Batman it would be Ra’s as I view him as the true “arch enemy” who has the brains and resources to truly challenge Batman.

From The Batman Adventures to Batman & Robin Adventures, which comic book is your favorite?

I haven’t read enough to pick a favorite.

What’s your favorite thing about Batman The Animated Series?

The fact that you can see the love of the comics that the creators have in every episode. Excellent writing and art design took BTAS to a level beyond its contemporary animated series.

When Did you first watch Batman The Animated Series?

What’s your favorite thing about Batman The Animated Series?

I, First Watched Batman the Animated Series On Television When It First Came Out!
My Favorite Character Is Batman Of Course!
I Also Loved the Other Characters!
Like Rene Montoya and Harvey Bullock!
I, Of Course Loved Bat Girl and Robin!

I, Loved All the Episodes with Cat Woman!
The Joker Was Done Well!
I, Love That They Brought Out Batman’s Gallery of Rogues!
Too Me, They Stayed True Too the Comics!
Nobody Died!
D.C. Seemed Too Have Fun with the Show!
I, Think Batman the Animated Series Has the Best Bat Mobile!