DC and Walmart Team Up for 'My First Comic' Program! 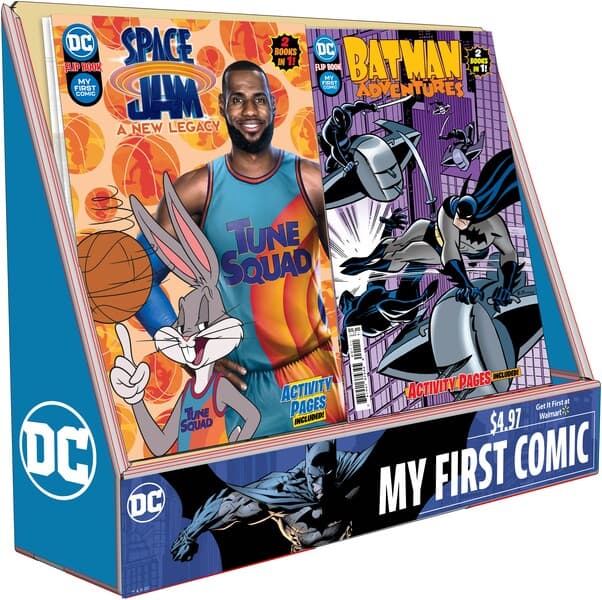 DC, the home of Batman, Superman, Wonder Woman, and the World’s Greatest Super Heroes, is inviting young readers into the world of super-hero storytelling with My First Comic , a program debuting in 500 participating Walmart stores across North America and on Walmart.com.

With graphic novels among the fastest-growing categories in book sales, My First Comic is an ideal way to exercise the imaginations as well as the reading and learning skills of readers ages six through nine. Each 48-page two-in-one “flipbook” features stories spotlighting DC characters, plus activity pages containing mazes, puzzles, matching games, and more.

“ My First Comic is a great way to extend popular DC characters to a new audience that’s just learning to read, providing a gateway into other age-appropriate DC content, like our middle grade graphic novels,” said Nancy Spears, VP – Revenue, DC. “DC’s partnership with Walmart has been instrumental in presenting our characters and stories to a mass-market audience, and now parents who are reading our Walmart four-pack bundled comics and 100-page Giants can share the DC Super Hero experience with their children.”

The ‘My First Comic’ flipbooks will be arriving in participating Walmart stores across North America on the week of August 3rd, 2021.

To learn more about the stories contained within the comics and sneak a peek at some of the internal pages, head over to DC Comics!

Do you have a potential new comic book reader in your life? Let us know in the comments!

i was just thinking the last time i was in Walmart how much i wished comics had a presence! when i was a kid, checking out the rack was the highlight of every trip there. i hope this is a big success.

when i was a kid, checking out the rack was the highlight of every trip there.

Same- I remember they hung on wire racks near the registers, so they were eye level with me. I loved that

I might get these for my grandniece. She loves reading, but she hasn’t gotten into comic books yet.

Love this idea for the young’ins!

They’re still gonna stick them in the most inconvenient location in the store, aren’t they?

My first thought as well. BRING BACK THE SPINNER AND LET THEM BOOKS HAVE SOME ROOM!

Literally INSIDE the men’s bathroom, yes

I love this! I actually bought my first ever comic book at a Walmart in Texas

My first comic was through a grocery store as well!

I’ve heard about old timey grocery store comics but I don’t remember seeing them! Maybe I was an oblivious kid, probably.

The first comic book I ever bought was at a local IGA. They had two full spinner racks!

Do you have a potential new comic book reader in your life? Let us know in the comments!

Nope! Any titles of interest will be for me, as I’m a giant kid at heart.

I’ve loved Walmart and DC’s partnerships going back to the days of (“the days of”, like it was so long ago

) 2018 and the inception of the 100-Page Giant line. That and the second volume of Giants was a lot of fun (as are the single issue bundles).

Another Walmart/DC goody for me to look forward to. Thank you, DC and Sam Walton!

SN: It wasn’t mentioned in the article, so I’ll ask here: Will this replace the current bundle program, or will the flipbooks be joining them on the shelf?

One of my Walmarts still has leftover Giants next to the bundles, so I could see the bundles and flipbooks sharing space.

when i was a kid, checking out the rack was the highlight of every trip there.

I remember going to the grocery store (I think it was called Pratt’s then but I think that store has changed names and honers roughly 2 bazillion times in my life) and looking over the comics and my parents letting me get one. It’s a shame kids don’t have the experince of finding comic book racks everywhere and being able to discover comics. You really can’t do that these days. Comic Book compnies made a killing switching to the direct market, but they did it at the expense of bringing in the next generation of comic book fans, and they are paying for it now unfortunately. Granted, printed media is on the way out so maybe it was inevitable. But don’t think comic companies did themselves any favors long term by going almost exclusevly to the direct market. It is why they have to do promotions like this now.

It’s a shame kids don’t have the experince of finding comic book racks everywhere and being able to discover comics. You really can’t do that these days.

It’s a shame DC doesn’t push digital more, as most kids have a phone in their possession at all times, and can have around the clock access to DCUI, Comixology, Hoopla and the like at any given time. They really are missing out on huge audiences of potential new readers by not doing more on that level.

Re: spinner racks, I remember them at:

The one at Woolworth’s was always my absolute favorite. I spun and spun that puppy as my four eyes perused the wonderful four-color fiction on display before me.

Superman #53 remains an all-time favorite Woolworth’s spinner rack pick of mine, and I still have the copy I bought oh so many years ago.

I would hope today’s kids have been enticed into comics by the Giants and comic bundles from Walmart, as well as the upcoming flipbooks.

I know that if I was a kid today, I would have loved the Giants, in particular. As a kid at heart I do indeed love them.

This is a smart move for DC. Get them young and you could possibly have a lifelong customer

I agree that digital is not only the present, but also the future. I have been having a blast with DCUI. DC (presumably Discovery in the near future) should really be pushing DCUI as much as possible. If in-house DC comics is going to survive into the modern age and past the death of print; they really do need to do this. Because, like you said, everyone including the kids have a computer in their pocket now and can have comics with them wherever they go.

I’ve been reading mine on a tablet that I purchased at a Walmart for, if I remember correctly, about $80-$100. It has been the perfect little comic reader and I have kept it around mostly for that. I think it has about a 7 or 8 inch screen and the comics look absolutely amazing on it. A great improvement over reading them on my phone.

I am 32 years old now and never really read comics much until DCU and now DCUI. DCU drew me in with the Harley Quinn animated series and I had always meant to see the Batman Animated Series from the 1990’s as well. So, I was like, ‘Cool. Looks like enough content to keep me around for a while.’ So, I got a years subscription.

I noticed the comics on here and thought to myself, ‘I’ve watched a lot of Youtube videos trying to figure out the history of DC and these characters. But, tracking these comics down is going to be a time consuming and expensive task. These stories sound so interesting in these videos; but, I’m sure reading them first hand myself would be far more interesting than someone just telling me about them.’

DCU finally brought comics in at a level that was affordable and convenient to me. The cost has also been a major reason I stayed away from them for so long, when I got older into my teen and adult years. But, DCU and now DCUI have an amazing price point that is more than fair for what you get.

I remember I dived in and read A Death in the Family, Death of the Family, Harleen, some of the Joker’s own series, DCeased, Dead Planet, Hope at World’s End, The Unkillables, White Knight, The Long Halloween, Adventures of the Super Sons, some Teen Titan’s Go, what I think is the original Court of Owl’s story line, (from the early issues of the New 52) the original Batman Issue #1 from 1940, as well as Batman’s first appearance in Detective Comics.

DC has a great ability to make comics for all age groups and also take their characters in some very new directions. One of the things that I have loved about the comics is the off the wall directions they go in that you’d never see in movies or games or television.

I often times look back and wondered why I never got into comics sooner. But, I really do think that DCUI is a treat.

There is nothing wrong with the Walmart deal and some cool physical comics for the kids. But, I agree with you that they really do need to push DCUI. It is the future and I think it can be a bright one.

There is something for everyone here and I stayed because I liked the comics so much from DCU that I knew DCUI would be worth the money. Especially now that we get some Graphic Novels and Black Label.

I am now trying to find some new series to get into sense Dead Planet has concluded. I am looking forward to the upcoming Robin series, as Damian Wayne is my favorite DC character. It looks like that came out in late April. So, six months should put that in late October for DCUI? Love the new costume from the cover I saw. Also, might read Curse of the White Knight.

Where do we go to make suggestions? I’d really like to see Batman Last Knight on Earth from Black Label. That looks so interesting from previews.

I don’t know why I didn’t get into comics sooner. I was never much of a reader as a kid. School kind of killed that for me at the time by forcing me to read boring things I had no interest in. I really didn’t get into super heroes themselves until the Dark Knight Trilogy in my teens. And, by that point, I was already a bit of a penny pincher because I think I was already working for my money; McDonald’s. I was already into computers and gaming and movies and so $4-$5 a comic was a no go for me. But, about that same amount a month for endless access to thousands of them (including cool old ones I always wanted to read) is a great deal!

I hope the Walmart team up goes well. But, really, push DCUI! Let people really know what a great deal it is and how much is here so that parents buy it for their kids!

I’ll probably grab a copy of the Batman one for myself and another for my niece.