With epic new storylines, over 20 exciting new titles, superstar creative teams, and villains that will push the heroes beyond their limits in bold adventures

the DC Universe will be heading toward the light,” said DC publisher and chief creative officer Jim Lee.

Until the next universe-devastating event, I’m sure.
I certainly feel confident getting this from one of the architects of what caused the rampant need for “not-reboot-tweaks-and-fixes” in the first place. Yep. Totally excited without a single trace of sarcasm, that’s me.

Skimming the titles they have planned, none of them seem bad on their premise. That said, I can’t say they’re what I’m looking for, personally.
Let me know when this title gets the greenlight. 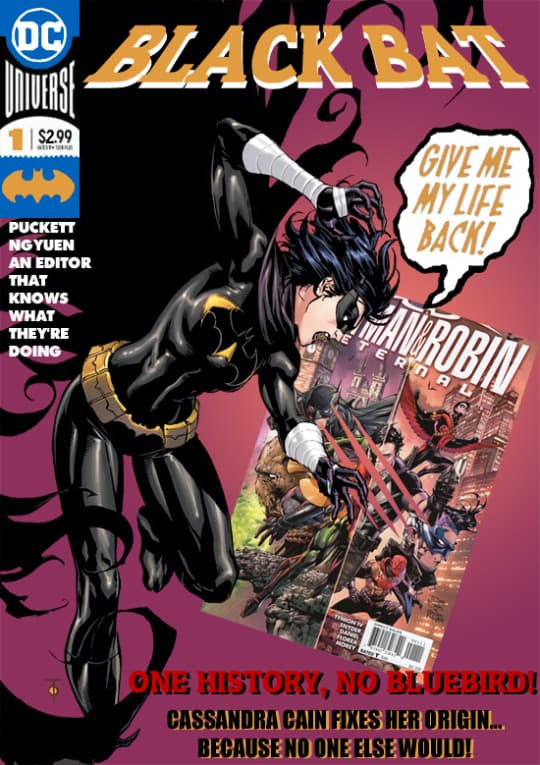 As a long-time (43 years) fan of pre-Crisis, post-Crisis, early New 52, and Rebirth, my suggestion would be to branch the DC monthly publishing line into 2 distinct lines, by leaning heavily on the return of the infinite earths.

Have a “DC Extended Universe” line, comprised of many of the current titles and featuring all of the “everything happened” continuity under this brand, and with the current versions of our favorite characters on Earth-0, or whatever it’s now called. Basically, what we have today, but with a bit fewer Bat-books.

Simultaneously, launch a New 52-style “DC Prime Universe” line, comprised of a number of the classic characters but in rebooted, younger, continuity-free versions, that have their classic origins and are at the start of their careers. This brand would be situated on Earth-1, or Earth-Prime, etc. A clever storyline developer/architect could spin this new “earth” out of current continuity by having some event occur wherein these younger versions are cloned from the current legacy versions, in-story somehow. Much like Star Trek did with the Chris Pine cast.

Each line of comics would have its own unique cover-dressing that identifies which brand it belongs to. Conceptually, this wouldn’t be too different from the pre-Crisis era which had the current heroes on Earth-1, and their Golden Age counterparts on Earth-2, with the occasional crossover.

To me, this would allow DC to have its cake and eat it too, by satisfying both legacy fans like myself, and new-generation fans who are turned off by the myriad reams of continuity, and potentially increase sales and grow the audience a bit more.

I know Marvel has tried something like this in the past with some success, but I don’t think DC really has tried this, at least not quite to this extent. It basically takes what worked with the New 52, and past continuity, and allows them to co-exist alongside one another.

It is possible to have just 1 line with simple minimal continuity like superman came to earth some vague years ago, golden age justice society was some vague years before the current justice league. Most of the clutter continuity in the current line is just not necessary and can easily be ignored quietly if desired and if needed to attract new customers (just quietly ignore clutter continuity and there is no need for retcons and reboots).

Don’t forget the Walmart bundles that replaced the 100-Page-Giant line.

Yeah, but…that doesn’t strike me as more than a potential use of over-printed issues, sadly.

I don’t think DC really has tried this, at least not quite to this extent. It basically takes what worked with the New 52, and past continuity, and allows them to co-exist alongside one another.

I disagree that DC hasn’t tried this. The Earth One line of graphic novels was pretty explicitly an attempt by Didio to copy the success of the Marvel Ultimate line. There’s also the current Knightwatch comic line, and the many, many Black Label lines. And the YA graphic novels. None of them have been managed very well, but honestly, given how Marvel basically just murdered the Ultimate Universe after 15 years, I don’t think it’s really a long term business plan.

Distribution is distribution. It gets product in front of potential buyers, after all.

It does, but if there’s not plan, then any success or failure will be accidental, and DC won’t be able to capitalize on it.

Skimming the titles they have planned, none of them seem bad on their premise. That said, I can’t say they’re what I’m looking for, personally.
Let me know when this title gets the greenlight.

The magic of Dan Didio right.

Thinking about his last few years at DC, I’m conflicted now that 5g is dead because I would never wanted these new legacy heroes like Jace to exist if DC comics was never going to follow through with their storylines. Likewise, while I hated the leviathan stuff, writer Brian Michael Bendis time at dc comics did help bring superman more coverage than ever before and that was good for the character when he was practically absent on the big screen. It really wasn’t a coincidence that Bendis titles were finishing up quickly when Dan Didio was going away, I’m sure he was important to 5g in some way before it was scrapped.

Dan Didio either was setting up another failure or could have actually redeemed himself by following through with his revamp of the dc universe, it’s hard to completely make judgment calls for something we technically got but in half measures with future state.

Now I am just waiting for Maxwell lord to be redeem and I could stop complaining about Dan Didio decisions altogether.

DC needs to purge most of the Batfamly any ways

I didn’t agree with every decision he made, but Dan DiDio was actively trying to solve DC’s logistical continuity issues. I will give him that.

Superman and The Authority was originally devised as part of 5G. Superman was meant to be older.

Not sure if people were perplexed by the older Superman in Superman And The Authority.

Maybe some were, but there’s an explanation for this in Superman #29 and Action Comics #1029. Kal and Jon closed a dimensional breach, but the energy from the breach and the wounds Kal received fighting the creatures coming through poisoned his system and lead to his aged appearance and loss of power.

Dan Didio either was setting up another failure or could have actually redeemed himself by following through with his revamp of the dc universe, it’s hard to completely make judgment calls for something we technically got but in half measures with future state.

I tend to go with what Linkara has said, that good stuff happened under DiDio, more despite his presence than because of it. Maybe not all his ideas were terrible (not that I can think of any at the moment), but a lot of missteps could be traced back to him. More than I’d be willing to give any benefit of the doubt.
I even made a video about how I had just bit of hope when I saw the revised timeline featuring Cass debuting as Batgirl. I thought maybe this Orphan mess would be done away with (no offense to people who like the reinvention, but–it’s bad. It does not measure up to the original history). Then 5G got cancelled. [shrug]

I didn’t agree with every decision he made, but Dan DiDio was actively trying to solve DC’s logistical continuity issues. I will give him that.

A friend of mine has said, no one intends to write a bad story. While I don’t dispute DiDio’s love of the medium, I just can’t help but focus on how many bad decisions got pushed through when they didn’t need to be, that could’ve avoided other problems down the line.
I don’t know if he was really the one to fix things–depending on the level of influence he’d have.

I tend to think of it more as fixing these issues is a monumental task, there’s no “right” way to go about it, and, whatever you choose, you’re bound to upset a lot of people. In my estimation, DiDio’s biggest flaw is lack of commitment to the big decisions when he made them.

If 5g was not averted, my guess is comic book history would be more or less the same and we would still have Dawn. The minor difference might be a minor retcon to make the icons young again for Dawn.

Dawn is doing something new and the new strategy seems to be to promote solo titles rather than team titles like the Justice League. My guess is there might be no justice league title for the whole of 2023. So far, team titles like Titans and Teen Titans seem low priority and the solo titles are being done first. So far, no Titans title yet but there is already a Cyborg title announced. No Young Justice title yet, but Conner Kent title already announced.