Darwyn Cooke Gets Inside Batman's Head 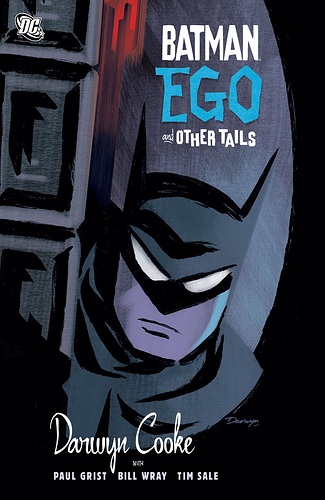 Batman: Ego and Other Tails isn’t just one of the Batman graphic novels you should read before the return of the Dark Knight in theaters this year. It’s one of the best Batman books, period.

Darwyn Cooke’s timeless collection of Gotham-centric stories was singled out by The Batman’s director Matt Reeves as an inspiration for the film. So, with that in mind, I thought it was high time I read it. Let’s get ready for The Batman —as prepared as we can get, anyway!—by taking a look at two stories in the volume: Batman: Ego and Selina’s Big Score .

“I wanted to get into the mindset of the character,” Reeves said during DC FanDome 2020, “and I wanted to think of the psychology. For me, I think, one of the cool deep dive (comics) was Darwyn Cooke’s Ego . He’s confronting the beast that is Batman, and there’s a kind of duality.”

As Cooke writes in the book’s introduction, Batman: Ego , his first project for DC Comics, started with a simple question: “What if Batman and Bruce Wayne were able to sit down and talk about what it is they do?” What follows is an unforgettable look inside Bruce Wayne’s damaged psyche as he grapples with the decision to continue his double life.

To learn more about Darwyn Cooke, Batman: Ego and much more, head over to DC Comics!

Have you checked out Batman: Ego and Other Tails? Let us know your thoughts in the comments!

Have you checked out Batman: Ego and Other Tails?

I have. I first read Ego in its original single issue form as “Batman: Ego”, and it is great. Definitely one of Darwyn Cooke’s best (and that says something, given his track record with DC).

I’m definitely going to re-read Ego at some point. Maybe after seeing The Batman, so it can then make me want to see the flick again and from a psychological POV, so as to pick up on all of Ego’s influences on it.

I’ve always wanted too read this, looking forward to it, love the artstyle on the front cover.