It would be a dark, graphic and mature animated series Targeted for adults. It would show the origins of Darkseid and his rise to power of apokolips, with bits of humor here and their. Explore parts of apokolips that we DC fans have not seen before. It could be a full blown series or a limited series. The animation should be that of the OG DC animated shows. And most of all, Michael Ironside would voice Darkseid.

As long as it includes this, I’m in 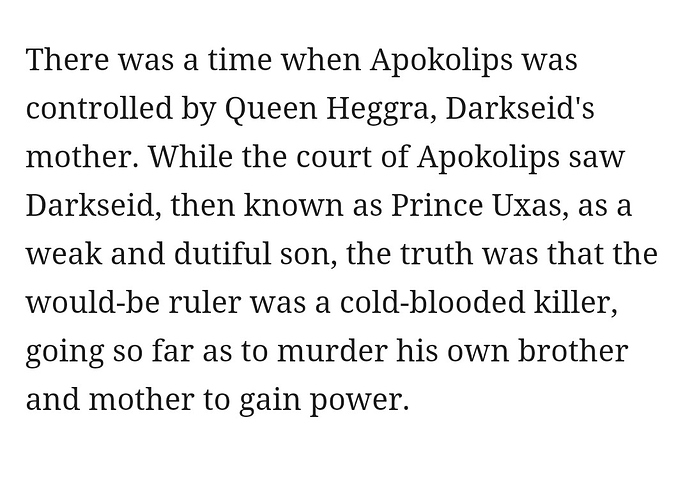 If this ever comes true, this will definitely be in it

I think a Darkseid series would be great. However, Kirby was able to create the entire 4th world under the CCA.
“Dark, graphic and mature” won’t make it better or even good. It is what happens “between the panels” that build suspense and can be vastly more graphic in an audience’s mind than what you can put on screen. Darkseid and Apokolips isn’t about the violence. It is about the palace intrigue. It is classical or Shakespearean in its style. That is what Kirby did and it was done to great effect.

I think this entire thing about “dark, graphic and mature” be it comic books, film or animation is mostly a desire by lots of people that don’t want to use their imagination. They want to be spoon fed everything, which gets pretty damn boring, IMO.

A Darkseid animated series if handled well could be awesome. The only thing that could be an issue is the audience’s reaction to the character himself. Darkseid simply put is an evil remorseless monster (and that’s putting it extremely lightly) so much so that viewers could not sympathize nor empathize with him. At the same time making Darkseid like MCU Thanos or the lesser of two evils would be going against the character. Not to say that it’s impossible, I’m simply saying that audiences would likely not have this show sit well with them, especially since the show is about a being even more malevolent than Satan himself.

audiences would likely not have this show sit well with them, especially since the is about a being even more malevolent than Satan himself.

I think the fact that it could not sit well with some people is the reason to do a series.

I’ve never thought of Darkseid as malevolent. As the saying goes, “Darkseid is”. He is above petty concepts like “morality”. I think it much like Shakespeare’s Richard III. That character basically wakes up one day and says to himself. “There’s like 9 people between me and the throne. I’ll just kill them all.”

Certainly showing the origin of Darkseid and the relationship between he and his family, which is largely unknown. Not to mention all of his main lieutenants, and how they are used, yet still plot and scheme on their own. The politics of absolute monarchy, absolute power.

HQ is really almost an anti-hero in her animated series.

We rarely get to see things from the “villain’s” perspective. Sinestro is one of the few, via “The Sinestro Corps wars” and that perspective is really fascinating.

A Darkseid series would be an awesome peek behind the scenes of villainy. Not to excuse it or draw empathy to it. But to celebrate its villainy and who better to do that than with the greatest comic villain of all time, Darkseid!!

@DeSade-acolyte Funny enough after reading your reply yesterday, it got me thinking about what would happen in a Darkseid centered show… until I inadvertently came up with my own mental draft of the story, arcs, and layout of a 4 season show. I have no idea why I came up with it or how, but it just came to me. I guess I have an odd knack for randomly coming up with things even if I wasn’t intending to. If you or someone else would like to hear it I could tell it.