I’m a pretty new reader to DC comics and for the most part I’m really enjoying it! I started with Rebirth (and, of course, it’s lead up with Darkseid and New 52 Superman) and I’ve loved it so far! That was until Dark Nights: Metal. It almost turned me off comics completely. As a new reader I felt like I was absolutely lost. Interviews suggested the event would be new reader-friendly but that was not at all true. So, I’m wondering how much of Metal matters to the DCU going forward. I still have many Rebirth issues to go through but I don’t want to waste my time if I’m not going to know what’s going on. Does Metal have a massive impact?

And just a reminder, I’m, like, REALLY new to comic books. I’ve really wanted to get into them because I love DC characters but I’m worried accessibility will become a bigger issue. 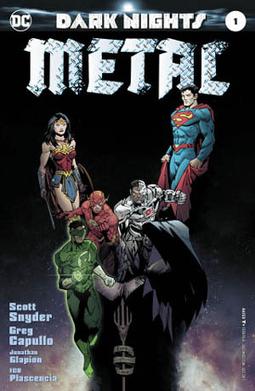 I think the simplest way to explain the impact of Dark Knight: Metal on DC multiverse is that it breaks a barrier called The Source Wall, which protect the multiverse from the unknown elements from outside. The full impact of this remains to be seen, but it caused changes to some current characters, and new enemies and beings come into existence. (Other worlds like the Sandman Universe becomes included in the DC multiverse.)
The Justice League and the Suicide Squad have investigated the damage of the Source Wall in the follow up mini series No Justice.

I have been reading DC Comics since the early 1960s and Dark Nights Metal sometimes confused me a lot, also.

There are pros and cons.

None of the tie in comics were needed, but the event itself is largely constrained and not in every title.

I liked some of the action, like the Justice League chasing Batman and Batman threatening to use Baby Darkseid, as a weapon.

There is a feeling of hopelessness in the event, where the heroes still struggle, no matter, if they can succeed or not. Heroism is always nice, but it is needed because Batman acted very stupidly, as if compelled.

Starro was very funny. And there was some thought in the Batman/Justice League Combo Villains, complete with backstory.

The party at the end was great, and the addition of Hawkgirl and Martian Manhunter to the League was appropriate and long overdue, bringing back two stars from the. Animated TV series.

But basically Batman acted very stupidly, without consulting anyone, and the DC universe is dying as a result.

TBH I agree that it was kind of a mess. Loved the concept if not so much the execution. But don’t worry about it. No event completely overwrites the trajectory so much that you can’t get your bearing. You can pick and choose which you want to buy into. Think of comics as being like a puzzle box poured out on the table. Each piece is an individual issue but you don’t have to have them all to see the larger picture. The context of events will fill the missing gaps in your understanding. Don’t let the “wholeness” or entirety of the universe overwhelm you, nor the finer details. Stay whelmed.

I was never much of a comic reader until recently but if your wanting help understanding all of it Rob over on comicsexplained has some really good videos explaining everything at least that’s what I’ve been doing when I dont get something hope it helps.

Metal was supposed to be crazy and confusing. That was the point of it. Now, everyone in the DCU is scrambling to try to understand its impact and consequences.

Mainly, it allowed DC to change up some of its characters, and get rid of that awful JLA crew.

I am getting back into comics after a 10+ year hiatus. I think you can continue reading DC without worrying about Metal. Even stories such as The Terrifics which came from Dark Night Metal has a lighter tone and is a fun read.