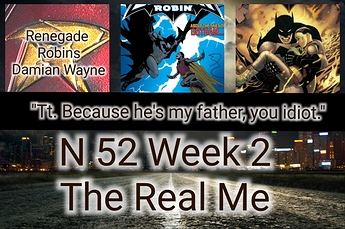 Hello everyone @RenegadeRobinsClub Hope everyone is doing well. This week we will be continuing our look at Robin’s adventures in 2011 DC New 52 reboot. Last week we left Damian in a bit of a bind as Nobody has demanded that he kill in order to prove his willingness to return to his killer ways. We will be wrapping up that story this week. So hang on everyone. We’re in for a wild ride. Does Damain turn his back on his father’s teachings or is there more going on here? Let’s find out in this somewhat shorter session. 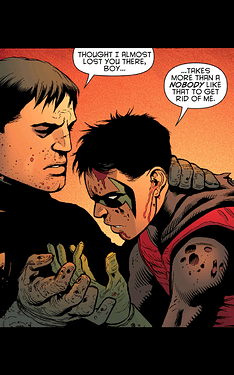 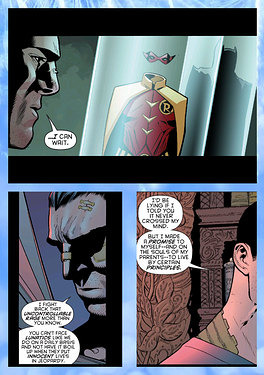 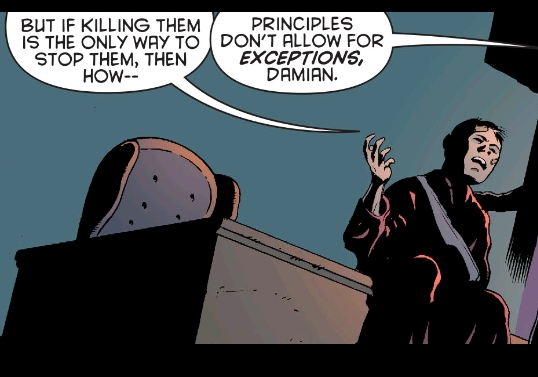 And that’s that. See you all next time.

Join RENEGADE ROBINS and get a schway flair and meet other Jason Todd and Damian Wayne fans.

Next on RR: DW "BEWARE THE COURT OF OWLS

I"m not sure if I needed the Henri Ducard story to be given any new developments or twists, but I guess it works to have parallel father/son relationships.

Oh, and I was amused when Nobody said, “Robin will die tonight.” Can I save Damian’s life with a phone call?

I"m not sure if I needed the Henri Ducard story to be given any new developments or twists, but I guess it works to have parallel father/son relationships.

It’s funny, that’s something that never really clicked or I didn’t realize until reading it this time, that in a lot of ways Nobody feels like a warning of what Damian could become if left unchecked and, perhaps most importantly, unloved.

Yeah, I didn’t really need it either @AlexanderKnox. I really dislike it when writers do that although I suppose it is the safer way to go. At least Ducard is a familiar character and not some newbie no one cares about. Bit of a double edged sword though.

Nobody feels like a warning of what Damian could become if left unchecked and, perhaps most importantly, unloved

I can see that. The question is does Damian believe his father loves him? I would say that Bruce’s actions, here and pretty much all through this series as well, prove that he does even if he cannot say the words

I think he mostly does believe and understand that his father does love him, but there’s a part of him built from his years of living with the al Ghuls that makes him believe that love is conditional. Damian believes his father only loves him if he abides by the code, and what happened to Nobody in the end sort of proves him wrong. Bruce doesn’t hate Damian after what happened, and going through the traumatic experience has made it easier for Damian to accept that Bruce can love him for who he is.

Jason seems to also feel that Bruce’s love for him is likewise conditional and Bruce seems bent on proving that point at times (Rebirth RHATO #25 for example.)

This whole thing still makes me wonder why it is Bruce can accept Damian for who he is but somehow has an inability to truly accept Jason for who he is. Bruce tells Jason at one point that it’s okay for him to be an ‘outlaw’ seemingly accepting Jason as he is but then he later banished Jason from Gotham and beats him to within an inch of his second life for acting the part of an outlaw. Talk about mixed signals.