Most people dislike or even hate Damian Wayne, myself included. I feel that he doesn’t change the Robin role or improve it in any significant way. His background of being the son of Talia and Bruce makes him have one of the best origins in the DC Universe being put to waste. Every Robin has a unique background and their character arcs are very unique. We have never had a Robin going full blown evil before (Jason became an Antihero). So what do you guys think? Should Damian turn evil?

No. His story is about redemption and his swagger is a foil to Batman’s seriousness. Tomasi’s Detective Comics has proven that Damian can be a great character and I can’t wait for you guys to read his run on DCU!

@Nathan, I will admit I haven’t read it, but his character feels too much like Jason except even crazier. I feel it’s so perfect for him to turn evil.

I like Damian and I like that he has been growing as a character in recent years. First he started out as a devil that I admittedly hated but once I realized that was the point in the beginning, I wasnt upset about it and over the course of the past few years we have really seen him start to evolve as a character. His redemption arc is a satisfying one that has been building for years.

Damian has come into his own as a character. Im glad they didnt listen to fans and they kept him around. Plus we wouldnt have gotten SuperSons without him.

His backstory is a better backstory than the other Robins except for Red Hood imo and I think he will continue to evolve as a character and end up being almost as strong of a character as Nightwing or Batgirl in like 10-15 years. .

Tomasi seems like the only person who can write Damian both with Supersons and now Detective Comics.

I think he should become his own hero.

I see him eventually becoming a genetically modified cyber-ninja.

Right now, when I see him, I think of Scrappy Doo.

When Grant Morrison was writing Damian it was annoying, but Tomasi gave him a really nice redemptive arc where he grows as a person and actually becomes enjoyable to read. The only problem is that multiple writers ignore that and decide to do their own thing. It’s like Bendis, but on a smaller scale.

That’s lazy thinking. People are looking at him the wrong way. Let’s not compare him to other Robins, and let’s not rely too much on character alterations when so much has already been cemented with Damian Wayne already as a character. He’s not Ra’s, he’s not Talia, he’s not Bruce. He’s Damian.

Damian Wayne is an example of the
Tragic Hero. Born, bred/engineered, and meant for this life and no matter how much they cling for that redeeming quality - they’ll never escape their conflicting origins - and with that fight to prevent their destinies, it may ultimately lead to their downfall. Their wavering ethics on how to get things done are a staple to these characters. Even when they appear to get closure - or that much needed release - sure enough their stories take a curveball to the tragic side. It’s been done before and sure enough it’s spawned some very interesting characters in multimedia.
Examples:

The captivating factor now is the context and build up towards that story arc(s) we all know will refresh our minds as to why this character has everyone refusing to relinquish their investment with him (for better or worse). Love him, hate him. No one can say Damian Wayne is not an interesting character. 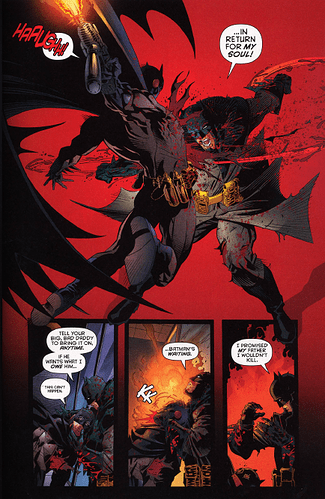 I wouldn’t mind seeing Damian being the one who convinces Ric to become Nightwing and become Dick again. The close bond between those two is what saved Damian during Grant Morrison’s time. Damian was an annoying twerp until he partnered with Dick and became more deserving of being Robin

Damien is one of my favorite characters, he’s great as the untrustworthy leader in Teen Titans

Oh is he not evil already?

Damian is awesome. He isn’t the same ole boring super do gooder.

No, I’m pretty sure he should just die. He’s a smug, arrogant little jerk who’s convinced that he deserves to be important because of who his parents are, and writers insist on proving him completely right. He’s the ultimate Gary Stu: by all rights, no one should be willing to give him the time of day, but everyone seems to feel the need to stop and pay attention to just how darned special he is.

And I mean, you could say the same about Batman… when Batman is really poorly written. The difference is that there’s no way to write Damian well. He has all of Batman’s worst personality traits and no redeeming qualities. He’s a vain, self-important, violent, whiny waste of space.

Damian is a tricky character to get right. IMO only a handful of writers other than Morrison (most recently Seeley, Percy and Glass) pull it off. I’ve never understood the praise lavished on Tomasi’s take, which IMO strips away almost everything unique about the character.

The problem with Damian, though, is that he doesn’t work great partnered with Bruce. He was a MUCH better foil for Dick Grayson. Very hard to use a Robin that works best not paired with Batman. As it stands he’s currently way more interesting and nuanced in Teen Titans than in the Batman titles.

He is like the Anti-Grayson, and I love it.

Eventually just kill him off, by means of him getting hoisted on his own petard.