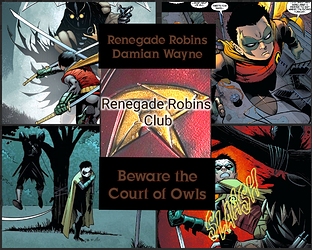 Hello members of the @RenegadeRobinsClub. I hope everyone is doing well.

I thought we would try something a bit different this month and try an extended session rather than our usual twice a month routine. So we will be taking a look at the Court of Owls/Night of Owls , which was an event that ran through several titles early in the N52. This was a story that Scott Snyder had been building to ever since he’s started writing Batman titles although the rumor was the ‘Batman’ here was supposed to have been Dick Grayson and not Bruce Wayne.

The story focuses on the mysterious and hidden Court of Owls who use Haley’s Circus as a proving ground for their deadly assassins, the Talons. Damian has a few appearances throughout the event but in the interest of understanding how he fits here I thought it best to at least offer up the reading order for this so you can get the full story. If you are just interested in Damon’s part in this I will bold those titles he appears in. Also I will not be posting questions for discussion this time around and would instead like to hear your thoughts on this story and Damian involvement in it. I’m looking forward to seeing your responses.

Hope to see you all again next month as we draw closer to our Robin Rises event.

Next month: Terminus, Robins and Jokers, oh my!

Damian’s presence in this story angers me…not because of anything he does, but because a universe where Grant Morrison’s Batman run is canon is not a universe where Batman spends his entire career without encountering the Court of Owls.

I’d have to agree with you there @AlexanderKnox. It just doesn’t seem like something that Batman would NOT know about since he’s always very aware of everything by this point in his career. Because of his being so overly prepared I found the fact that he had absolutely no idea about the Court didn’t sit well with me at the time. It honestly still doesn’t.

Now if this story was being told back in the day when Batman was a bit less prepared and had less access to tech I would have found it more believable that he didn’t know.

Edit: Or perhaps if the Batman here was Dick rather than Bruce.

As for Damian here’s some of my favorite panels from these issues.

While I love the Court of Owls run I have to agree as well. Maybe it would have worked if it showed in flashbacks that Bruce had some close encounters so he did know of them but simply did not fully know the extent of their numbers? It felt weird that in the beginning of the story Bruce just full on denied them existing.

I don’t have much to say about Damian here other than I really liked the interactions with the soldiers and his connection with the Talon at the end. Specifically the last panel that @JasonTodd428 posted.

Maybe it would have worked if it showed in flashbacks that Bruce had some close encounters so he did know of them but simply did not fully know the extent of their numbers?

That might have been enough for me to make this believable. As I said before I don’t know how its even possible for Bruce not to have had some sort of intelligence on the Court and don’t even get me started on the whole Haley’s Circus angle. This story might have also worked better as one with Dick as the main protagonist instead of Bruce given the whole Haley’s Circus/William Cobb thing.

Yeah, I thought his reaction felt completely off as well.

I really liked the interactions with the soldiers

That was my favorite part here. Damian just took charge and really showed off his training and his skills as a leader.

Yeah, Bruce not knowing the Court is a thing is odd. Not so much because of the detective stuff. I kind of like that he can sometimes get things wrong, especially in regards to his ego and arrogance. Rather, I find it odd that Bruce has no idea about this group of elites in Gotham secretly controlling it because Bruce is a wealthy elite who is massively influential in Gotham. The Court should have either tried to beat him or got him to join them from the start.

Maybe they laid low for a while after Batman’s “You have eaten well” speech and let the mafia take the fall. Then Lincoln March finally moved them back into action.

But then it also raises the question: were some of the other corrupt wealthy Gothamites from previous stories also secret members of the court? For instance, you’re currently hosting a reading of Blink. Perhaps Mr. Rich Guy Who Pays for Snuff Films was a member? Who knows?

I mean, if I was a member of the Court and suddenly some big dude dressed like a Bat blows up part of the Commissoner’s house and makes a speech like that, I’d probably be like, “Hey, I hear Tahiti’s nice this time of year” and take an extended vacation.

That is a good point and something that is a bit of a weak spot with the Court – they’re kind of nebulous, almost a hive. There have been some attempts at having full on characters in the Court, like Geri Powers later on in Snyder’s run and that DA woman in Robin War, but I don’t think there’s really been a character where that works.

Think of it this way – we have more Talons with interesting personalities than we do actual Court members.