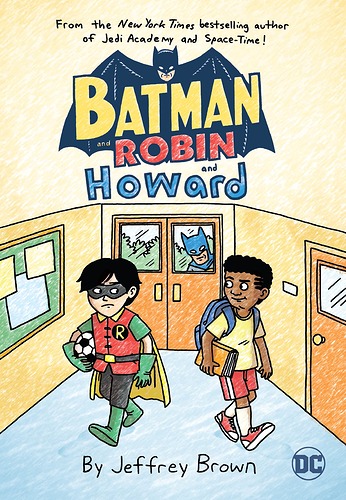 Damian Wayne thinks he knows it all. Wouldn’t you, if your dad was Batman? But when he leaps before looking one too many times, Batman indefinitely grounds his Robin from any more crimefighting. Starting over at a new school with a mandate to focus on his grades, Damian learns more than he ever expected when he meets Howard in Jeffrey Brown’s new all ages graphic novel, Batman and Robin and Howard.

Star Wars fans are already likely familiar with Brown through books like the bestselling Darth Vader and Son and Jedi Academy, but it’s great to see him take on a different, equally rich universe here and give it his own distinct spin. Brown’s Bruce Wayne is a lighter incarnation of the Dark Knight, but still one who takes raising his son very seriously. “You don’t know what you don’t know!” he advises the headstrong Damian before the first day at his new school.

To learn more about Batman & Robin & Howard, head over to DC Comics!

Have you checked out Batman and Robin and Howard yet? Let us know in the comments below!

I’m not going to read it, but I know for a FACT that I would have loved this in middle school.

Must Have for this household

I enjoyed it. I got an advanced reader copy and so was able to read it at the beginning of October.

It was very cute and I hope we get another volume in the future.