Damian Wayne and Raven as a Couple?

I think this was in another thread but no, definitely no.

I don’t see it. Putting aside the age difference, I think they both trend too dark. Each of them needs a partner to balance them. They’d only bring out the worst in each other.

I mean, Raven is like twenty and Damian is usually written around ten to thirteen. But, even without that, it wouldn’t work. They share literally nothing in common and it probably wouldn’t click as an “opposites attract” thing either.

He will inherit his father’s loneliness. But I do ship this.

No one deserves that.

Raven can do, and most assuredly deserves, better.

@HubCityQuestion His future in pre-Flashpoint universe (and after Tynion’s 'Tec… it was the darkest timeline). And, as Damian fan, I just wanna say that Damian IS getting better. And I would say that in a few (in universe) years of Alfred’s influence I believe he will be a person who could have a health…ish relationship. The screen is from Tomasi’s (and if someone gets Damian it’s him) current run. Could you imagine Damian cracking a joke few years ago?

But Raven and Damian… nah, not good at all. For me, it would need to be someone like Gabby from Tom Taylor’s All-New X-men. Upbeat, happy, quirky but deadly and weird. 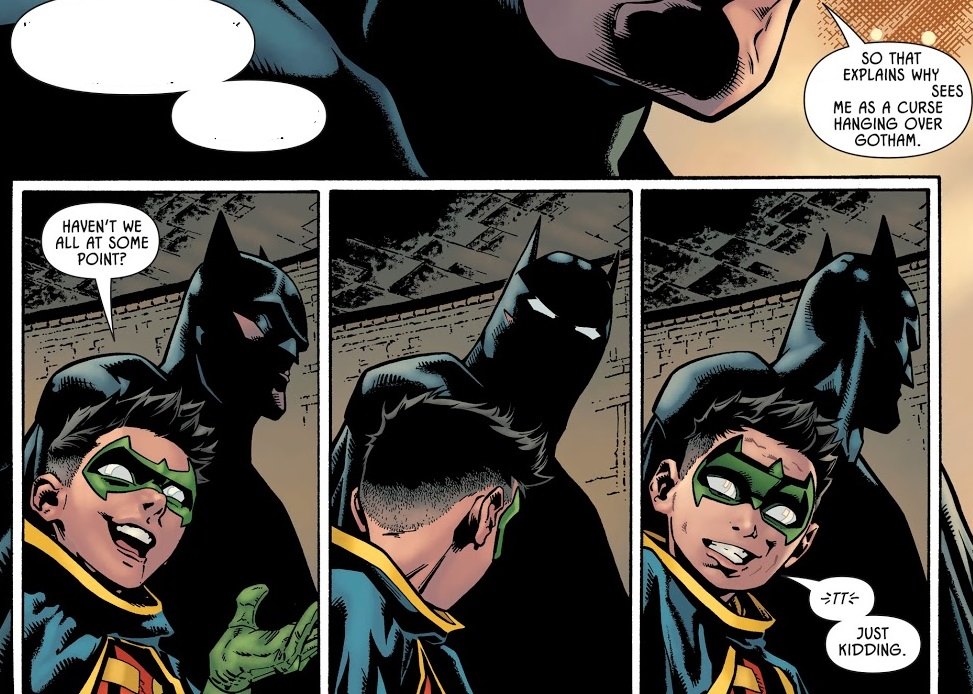 My question to everyone else is, would Raven really want an upbeat, happy personality? Damian would be more relatable to her. They have endured many trials that their parents have put them through. At some point Damian will mature. I don’t think he is going to stay in the “I’m Batman” mentality his entire life. He will learn eventually, and I think that may make him even more cynical. At that point he may be perfect for Raven. I think most people just like it 1. because of the previous TT (2003) series where Raven and Robin were really close, 2. because of the connection they kind of had in TT:vJL, and 3. because we thinks it’s ADORABLE.

It depends, in the animated movies “Justice League vs the Teen Titans” and “Teen Titans: The Judas Contract” Raven and Damian seem perfect for one another. However in the books, even the newer ones, Raven seems a bit too mature for a relationship with Damian Wayne.

Exactly, that is why it seems wrong. But if we were going off of the DCAU movies. Then it would be perfectly fine.

You people are nuts… Damian is the bestest…

Raven would be lucky to have that little turd.

Damian should get all the babes.

No one can even have an argument that it’s an interesting idea – the pairing has some really good substance.
I already said it before in other forums. If Raven were to hook up with anyone it’d of been about time for it to be one of Batman’s wards. Damian is the top candidate.

-Both pragmatic and mature beyond their years
-Deep connection and similar backstories as intended spawns of corruption and prodigies
-Complimentary differences (i.e. The Monk and the Assassin, the Sorceress and the Detective)
-Redeemed characters and potential for great stories that could head into plenty of directions (especially on the tragic side) it’s right up DC Black Label’s alley

Good stuff. I’d like to see an animation series of the Batman #666 world with Raven fixed in there somehow meant for mature audiences. It’d be killer.

Absolutely not. I don’t care how many times they gets deaged by crises Raven and Beast Boy are still around Dick Grayson’s age to me.

I think Damian should be with Nobody from his solo series.

Oh, this is an interesting question! I really like their friendship in Teen Titans vs The Justice League, but I’m not sure if I’d go as far as to say they were romantic.

There are some really awesome perspectives in this thread, and I’m particularly drawn to the parallels pointed out by @Rigo1336. They are obviously characters who have a lot in common, but with enough separation to make them their own unique characters.

My only hesitation would be with Damian’s… personality. While I love to see his acerbic nature play out on the page, it wouldn’t make for the healthiest foundation to form a relationship on. His blunt nature and reluctance to communicate, empathize, and compromise are all aspects of his personality that would make it hard for him to maintain a healthy romantic relationship with anyone. Especially when you pair him with Raven, who shares many of the same traits, in varying degrees.

The youngest of Bruce’s sons might have some growing up to do before he starts dating.