Anyone read issue #779 (out today)? I really enjoyed it. Very satisfying conclusion to that story arc, and I can’t wait to see what’s next for Diana.

Also, this was just: 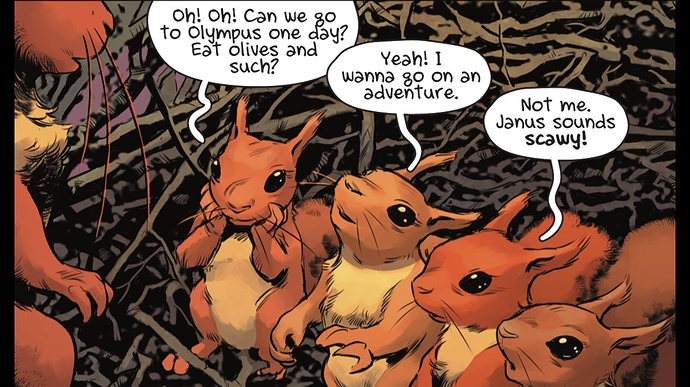 I picked mine up this morning and plan on reading it tonight after work. I am really hoping the conclusion is as satisfying as the rest of the story and I can’t wait to see what her next adventures are.

I read this book and completely forgot to come back to talk about it!!!

So much amazingness can be found within the pages of this issue. Most importantly, I was happy with the conclusion of the story and I am very ready for the next issue.

I agree, that picture that you posted was excellent and I love how he later says that he can’t lie because Wonder Woman wouldn’t like that. So much yes!!!

Another new Wonder Woman hardcover came out either this week or last? Wonder Woman: 80 Years of the Amazon Warrior. This is a compilation of stories ranging from her first appearance to Future State: Immortal Wonder Woman!

Agree; was a nice way to wrap up this arc. Overall, they’ve done a good job capturing the softer, kinder, loving side of Diana. They explored a lot of the mythology involving Gods and her connections to them. I hope future arcs capture Diana the warrior, showcase her powers, and challenge her physically and mentally.

The art was good, and could have been very good, if they stuck with Travis Moore for the entire run. They had a couple other artists for 3 or 4 issues in the middle, making for some jarring transitions (especially in that fairy realm issue). I feel like the run could have benefited from consistent art, especially with all the different looks Diana sported in this story. Was good nonetheless.

Speaking of jarring art transitions… folks have been saying the art for the backup story was too different. While I agree it was different, I didn’t have a hard time adjusting to it. I feel like the cartoon style suited young Diana, and provided some levity in a story that contained some surprisingly heavy themes involving involving truth and transparency. I enjoyed the backup overall, and wouldn’t mind seeing more of it in coming issues.

I enjoyed the young Diana story but the art didn’t fit with the main story. With that said, I believe there will be a Young Diana tpb soon and I plan on adding that to my collection. If I can get Jumpa and Diana in that cartoon style in one place, I am all for it.