Does anyone have any predictions or thoughts regarding this latest issue that came out today?

I love the current story arc so far!

Portraying Doctor Psycho as an alt-right media figure really fits his character. The Wonder Woman clone is a bit puzzling as those mirror clones are easy to break, so you have to wonder what use she is to Psycho. But, then there was a scene when Psycho is speaking to her that really tied it together for me. This is how he’s always wanted to see Wonder Woman: fragile, doting, and dependent on him. He hates Diana because her existence threatens his male ego. Having Sweetheart who looks exactly like Diana but has none of her strength allows him to belittle the real Diana and re-establish his own toxic sense of self. I also like the Twin Shadows as they represent the invisible hand of corporate manipulation which usually has a part to play in most human suffering.

If I were to guess who “management” really is then my guess would be Ares. I know, it’s a bit predictable, but most of the pieces fit. The Duke of Deception was an agent of Mars (the Roman Ares) in the Golden Age stories, and anyone who has the Duke “on ice” must have some sort of godly pull. Also, backing Psycho and his alt-right “milkmen” makes sense. Psycho’s movement spreads hate and misunderstanding. Those two things can easily lead to war. So… it feels a bit too obvious, but I can’t think of a better candidate. At the moment, my money is on “management” being Ares.

I like to see Queen Hippolyta 's Parents to be explained. In the Greek Mythology her parents are Ares the god of War, Otrera the high priestess of Artemis.

Welcome to the community, @carolanneprice2022.59260! Thanks for sharing your ideas with us! I’d definitely love to learn more about Hippolyta (maybe we will in Historia…) And I always, always want more Steve Trevor.

Here you go, @nuuninuunani - a clear shot of her face with the scar. 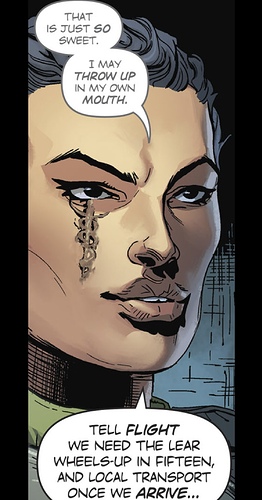 Apparently her name is “Marina Maru” in this version and the name of her team is “Poison.” Also, in Year One the “Maru Virus” (which actually was a poison) was a thing, which I had forgotten. So it’s all kinda there in Rebirth, just…different. 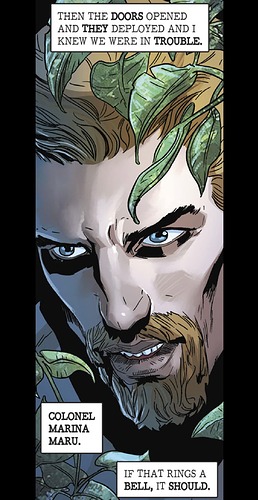 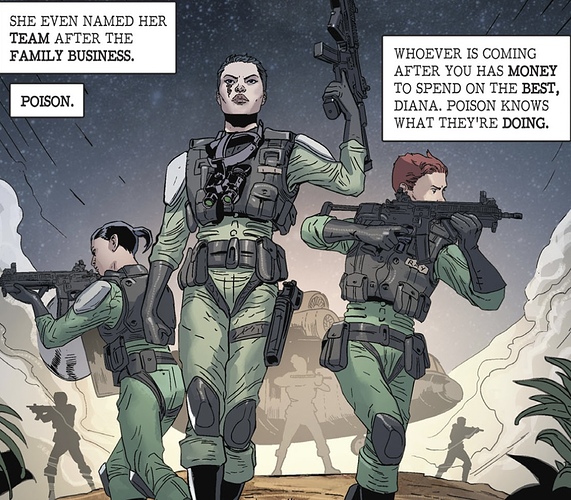 Wonder Woman [spoiler]I was NOT expecting the person pulling the strings on Villain Inc to be Hera of all people! Is she being affected by Dark Crisis and her whole dying thing? Or is this something else? O.o

Aside from that, im disappointingly not surprised at the death of Mistress. A shame, but I was hoping more would go on there.

Also I am loving the exchanges between Siggy and Steve! XD [/spoiler]

Nubia [spoiler]There is no way this run is going to end with a resolution that covers everything. Also im hearing that this will be the last bit of Nubia content that we will be seeing from Stephanie Williams in the foreseeable future.

With that aside, this has been an enjoyable story revealing Nubias current origin and establishing her as a champion of Sekhmet. Im hoping Vita Ayala sticks around to continue telling Nubia stories. [/spoiler]

I was NOT expecting the person pulling the strings on Villain Inc to be Hera of all people!

I was not expecting it either as I had bet on Ares. Still, it makes a bit of sense considering how Hera attempted to manipulate Yara Flor in Wonder Girl. It looks like Hera is attempting to erase or subvert the Wonder Woman legacy.

All in all, issue #790 was a good finale for the Villainy Inc. storyline. I was happy to see Dr. Psycho get what was coming to him. I was also glad to see Sweetheart stand up to him even though she tragically sacrificed herself before she could choose her own name.

Still, it makes a bit of sense considering how Hera attempted to manipulate Yara Flor in Wonder Girl.

A good point! In retrospect it leaves me wondering just how much of this plotline was planned in advance and if we were meant to get more storyline crossoverness with Wonder Girl…

If anyone read or is planning to read the new Olympus: Rebirth one-shot that’s out today (spoiler alert, it’s awesome

After years of bitter and violent conflict, the Greek pantheon of gods stands united to welcome their latest goddess…Hippolyta of Themyscira! Due to her heroic efforts in the mortal realm, the former queen has earned her rightful place among the gods and plans to use her newfound powers to take care of her Amazon sisters from beyond. Little does she know, some of the gods are wary of the new future Hippolyta brings and will do just about anything to sto…

I will most definitely read it, as soon as arrives on DCUI. I will do my best to avoid spoilers until them.

Certainly was not what I was expecting it to be, but it was pretty good for what it was. Which was an origin story for Nubia with a backdrop of setting up a new status quo for Nubia as queen, establishing how she intends to interact with the outside world and how. Giving Nubia her own ambassador team to work with her as she travels about on her floating island which is an awesome thing to bring back.

The A plot of exploring her origin was a good one. Still rather head scratcher to me establishing her to be a champion of Sekhmet and a princess of Madagascar. I kinda feel like they could have either stuck her closer geographically to Egypt, or used something aside from the Egyptian pantheon?

Eh, regardless it was a pretty meaty origin story. Not my favorite for Nubia, but it works well for this iteration. A couple tragic twists, a rather interesting build up. And it seemingly sets the scene for an oncoming storyline in Wonder Womans book. I wonder if its what we will be seeing next…

I kinda feel like they could have either stuck her closer geographically to Egypt, or used something aside from the Egyptian pantheon?

I feel like that would have been so much better. The setting is fine but ancient Egypt could have been a better setting. Connecting to Black Adam and a ancient Doctor fate through association.

Im also reminded of a book series I read recently, the ‘Akata’ by Nnedi Okorafor which took place in Nigeria and used the local mythology. Really gave the book its own unique voice with that.

Seeing Diana interact with the Esquecida really makes them feel more connected to her corner of the universe which is nice to see. Having her join them on adventures and such. Establishing them as a potential hook to draw Diana into events occurring in the region really opens the doors to things writers can use these additional Amazon tribes for.

Also, establishing Veronica Cale carrying out inhumane medical experiments, and having zero care about the lives of her employees is very on brand.
Curious to see what Cheetah has to do with all of her schemes.

Two words for this issue: Marguerite Sauvage. What a treat to see her illustrate an entire main series WW comic.

I dunno if this is really a spoiler, but I am so happy to see the return of Diana wearing her bracers with casual clothes. This is my absolute favorite thing to see for some reason. I just love the imagery of it.

Agree with you, @nuuninuunani, it’s awesome to see Diana and the Esquicida working together and calling each other sisters. Looking forward to more of this. Also I got my Diana and Hippolyta reunion at last, thank goodness. And I love the return of Team Diana with Etta sending support. More of this with Steve included next time, please.

Curious to see what Cheetah has to do with all of her schemes.

Same. They’ve had a pretty tumultuous working relationship since the start of Rebirth.

Really great issue overall. I also continue to enjoy the Young Diana backup. The art is gorgeous and the story has me intrigued at this point. Plus this thing is just adorable 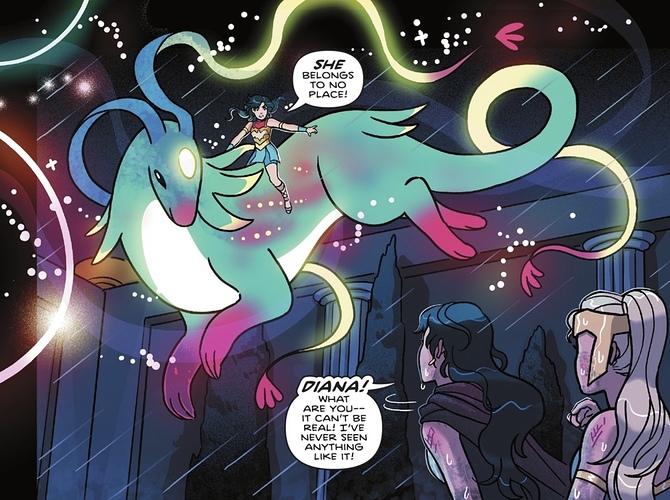 This was a really cool issue - I haven’t been following super closely, but Diana being a super spy was awesome, the art was fantastic, and I loved seeing Olympus Rebirth integrated into the ongoing plot!

Okay, I don’t know what we did to deserve a second full Wonder Woman issue drawn by Marguerite Sauvage, but we are blessed indeed.

The only thing better than Cheetah coming back, is Cheetah joining Team Diana. I cannot wait to see how this plays out. Interesting that we were shown Etta currently has a girlfriend before Barbara is reintroduced. Between that and the Diana/Steve/Siggy/Babe quadrangle, how much romantic drama can this comic hold?!

(Seriously though, writers, I need my babies reunited. Please make it happen.

I’m really excited to see where this goes from here.

I’m very interested in seeing Cheetah transforming to a more anthropomorphic, pre-n52 design, as her “good” form. Quite interesting!

I confess, I completely forgot that one of her abilities initially was shapeshifting between her Cheetah and human form. Making it so she can bounce between the more feral look and the more fursona design at will is a nice touch.

Its good to see the old cheetah again because I feel during infinite frontier, she was horribly handled, putting her as canon fodder in suicide squad and Deathstroke inc than a Wonder-woman villain.

True~ That said, I loved seeing Cheetah in a Wonder Woman costume