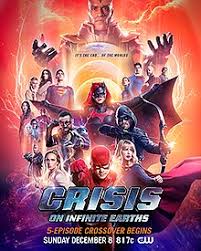 As the crisis comes to a close and the effects are felt throughout some of our favorite shows, we should come together as a community to discuss what happened and what we want to come next. The crisis has had some historic events, such as Kevin Conroy playing a live action Bruce Wayne, and we will discuss it here. For the week following the crisis we will discuss what we thought and felt.

Feel free to use these questions to help guide the discussion:
-What was your favorite line/moment?
-Which character stood out most to you?
-What cameo did you like the most?
-How do you think it compared to the actual crisis comic?
-What opinions do you have about anything that happened?

Come here starting January 15 to discuss the crisis and what you thought.
Enjoy!

Is it me or was it weird that Ryan Choi was the only one who grew a beard from episode 3 to episode 4?

I agree. But the paragon of humanity I guess. He looked like a human would after that long.

Crisis on Infinite Earths was absolutely the coolest thing to come out of DC in awhile. The level of fan service was unprecedented. They truly connected the Worlds of DC!!!

I know. I am so surprised that the Ezra Miller Cameo wasn’t leaked or something like that. That was the last thing I was expecting to see.

My question is, could they have done any better considering the constraints of budget, tv, etc. My answer, no way. this so far exceeded my exceptions. I’m not that demonstrative of a person, but I cheered out loud more than once just last night. And call me sentimental but yes, I teared up when Ollie was dying with the two people he was closest to among the heroes.

Me too. I think they did so much better then I thought they would. And during part five I was pretty much cheering and I was tearing up when that happened too.

This was really fantastic. I think my favorite cameos were done by Black Lighting. They really fit him into the storyline in a way that didn’t feel forced, which says something since he hasn’t been part of the crossovers before.

And for these characters, this arrowverse, I think this is as good of an adaptation as we could have hoped for. It followed the overall story archs pretty closely (monitor gathering heros, the towers, losing Earth’s, people traveling between universes, utilizing villains, beating the anti monitor, fighting at the dawn of time, and one last battle with the anti monitor).

I thought they did a great job making it seem like Supergirl would sacrifice herself fighting the monitor only to have Ray arrive at the last minute.

I also thought the lip service to throwing the monitor into soon was fantastic.

I completely agree. Was true to source material

Very much enjoyed BL. Not only is he cool, but his personality is different from the others so he adds a new vibe.

I liked that it wasn’t fan service for the sake of fan service. Every cameo had a purpose - fleshing out the concept of an interconnected DC multiverse.

I thought my favorite would be Smallville’s Superman, but he had way too much competition - sorry Smallville! I still love him though!

I’ve just started watching Lucifer and when he showed up a started clapping like one of those mechanical toy monkeys.

I would like to see this, commercial free edited into a single continuous movie.

It was an awesome crossover. I can’t believe how much of this they put in and adapting to fit there world was great. Definitely a lot of fan service which I enjoyed.

The speed force flashbacks were awesome and you BBC an really see how Arrow has grown. The Ezra cameo was fun. Really enjoyed seeing the interaction. Also didn’t realize he never had a name in JL until now.

Lex’s adventure was fun. A nice origin for the Monitor and some fun fights.

The Anti fight one was great. An the you fail this universe e was awesome. A very sad death seen (again).

The world merge was great. Didn’t think they would do it it they did and it was great. It was nice to them together. The Marv cameo was great and Perez pier was nice.

The Beebo fight was great. Enjoyed seeing Flash and Kara’s reaction to the weirdness of legends. Seemed like a classic age super giant monster fight which was fun.

Sara and Barry’s touching moment was nice. Rarely get to see them interact.

The Anti Monitor fight fun. He went giant the all hit and weren’t denying it was cool.

Arrows multiverse speech was great. Just show all the DC film and Tv universe together. Good or bad over or ongoing they were all one universe and there he to keep growing and showing more of what they have in store.

The funeral was nice and the league forming was awesome at the HoJ. Can’t wait to see that grow. Also a fun Gleek cameo. If it’s just some super friends fun or a Wonder Twins tease it was still great.

Overall it was a great crossover. Definitely feel next years will be small as they mentioned. So it may be a small worlds finest cameo with Batwoman and Supergirl. Especially since they want to push that friendship.

I think what they are going to do is do a bunch of smaller two show crossovers throughout. Marv said supergirl and flash team up all the time in this new earth so I hope that’s true. I would like to see a justice League crossover where they face a threat as the league. But I think they can’t go bigger then this unless they adapt another dc crisis but next year would be too soon for that.

I’m curious. The way they have Arrow Oliver narrating at the end you almost wonder if he hasn’t become the new Monitor for the universe.

I mean hey if the anti-monitor has to always exist then somebody has to be the monitor I’m thinking too.

Good point. He’s got to play some role in the finale of Arrow