Create Your Own Superhero/Villain!

Here’s what we want to know:

You can add art or just a write up!

Here’s mine. He leans more toward the silly goofball villain side, like Condiment King for example. This is long BTW

Name: Marshmallow Pete
Real name: Pete Marsh
The skinny/scoop: Pete Marsh was your average factory worker at Metropolis Marshmallows, Inc (their slogan is: “Whether you’re Uptown or in Suicide Slum, our treats will make you say yum!”) when the Parasite broke into the factory desperate for sustenance after being pursued by Superman.

Parasite pushed Pete aside and unknowingly into a giant vat of marshmallow cream. The other workers ran from Parasite and never saw what happened to Pete. He couldn’t get out of the vat before the mixing process began but he eventually did break out sometime later in the process. His body had been filled with marshmallow cream that he could manipulate to his will (ala Clayface, except Pete’s physical appearance wasn’t altered). “Pete Marsh is no more.” he said. “I am now Marshmallow Pete and I swear revenge on Parasite for pushing me into that vat and on Superman for not stopping Parasite before he got to the factory. My anger shall be made manifest and burn like a smore! Metropolis…this is war!”

So…MP tracks down Parasite. Parasite has no recollection of Pete which angers Pete immensely. Taking a deep breath, MP says “Feel my wrath!” and then aims his open hands at Parasite yelling out “Marshmallow!” upon which gallons of the stuff pour from his hands and onto Parasite. Superman shows up just in time to save Parasite from asphyxiation. MP says “No thanks are necessary Superman, I’m just doing my part to weed out the rot.” Superman explains that Pete could have killed Parasite and that vengeance isn’t the answer. Pete says "He deserved it! From now on, I’m just a living marshmallow within a human shell that can blast marshmallow cream out of my hands at whatever rate I want so long as I yell out “Marshmallow!”. Superman’s sympathetic to what happened to Pete but takes him and Parasite to Belle Reve anyway.

Amanda Waller greets Superman after Pete and Parasite are secured. With regards to Pete, she says “I bet he’s a sticky customer.” Superman ignores her rare attempt at humor and says “Please see that Pete gets medical attention. He seems like a nice guy.” Waller assures him that she’ll help where possible (of course he could be a candidate for the Squad but she doesn’t mention that to Superman of course) and Superman leaves for Metropolis.

In his cell, Pete says “I’ll drown 'em all in marshmallow. Condiment King’s got Gotham while I, in a unique stroke of alliteration have Metropolis.” He stands up in his cell and yells “prepare for my sugary wrath Metropolis!” then laughs maniacally until a security guard walks by and says “Hey, shut up Blueberry Jerry.” Pete scowls like Sideshow Bob when he gets a rake to the face and sits down quietly in his cell.

My original Character was invented for the JLA/Wizard Magazine contest. the Winner would get to see their character in a guest appearance in JLA. I was so busy perfecting my character’s story, that I missed the deadline to send it in. (which is probably just as well since the winning character was quickly killed off by Prometheus)
When DC Universe Online launched, I quickly set about putting him to work.
(As a result, his bio mentions events in that game, however, unlike other characters, his powers are NOT derived from the game’s ExoBytes)
GOLDEN DRAGON
Alter Ego: Mitchell Krueger
Occupation: writer
Background:
Mitchell Krueger was a gifted creative writer whose short fiction had appeared in numerous science fiction and adventure magazines. Krueger had even managed to get a few stories sold to Comic Book Companies and TV shows. While shopping for some antiques for his apartment, Krueger discovered a very interesting Urn with the figure of a Dragon sculpted on the lid. However this urn was no mere curiosity. It was actually a prison in which was kept the life forces and powers of all the dragons that had once existed. Centuries before, an evil wizard had cast a powerful containment spell to trap the dragons and reduce th evidence of their existence to mere dreams and fairy tales… Krueger opened the urn while cleaning it and the souls of the ancient dragon race seized him and transformed him into a musher larger being with metallic Gold skin, long hair and massive dragon wings. The dragons informed Krueger that he was now the avatar of their power. He was charged with a duty to protect mankind as well as redeem the Dragon Race’s honor. The Golden Dragon didn’t have long to wait to make his debut as agents for a hostile country had taken over a US launch site, and launched a single nuclear warhead at New York City on New Years Eve. The Golden Dragon used his mystical powers to open an inter dimensional window that transported the new safely out into space which made a spectacular display as the New Year began. The Justice League was impressed with the Golden Dragon’ and offered him a place on the team. GD joined the League Golden Dragon’s initiation into the League was scheduled Just as a future incarnation of Lex Luthor arrived and flooded the world with Exobytes that gave Super-Powers to hundreds of thousands.
Powes:
Golden Dragon has a limited shape-shifting ability in that he can transform from his normal form. (an average guy, medium build, roughly 5’8") to a heroic Golden skinned Hero with wings who stands at just over 6 feet. empowered by the Dragon Race, GD can also transform into massive Golden scaled fire-breathing Dragon. In this form he can increase his size from 24 feet (head to tail) to nearly 400 feet long. also, GD has access to thousands of years of arcane knowledge and powerful magics. The Golden Skin and scales make GD invulnerable to just about any kind of weapons. There are some ancient blades (swords/daggers etc…) that can injure him due to the mystical properties. As Mitchell, GD is at his most vulnerable, However, his role as the Avatar of the dragon race provides him with immortality and rapid healing.
Personality:
Above everything else, Mitchell Krueger is a very happy-go-lucky individual. He likes comedy and adventure. As Golden Dragon, Mitchell uses his sense of humor as much as his powers to fight criminals. (While visiting Gotham, GD once happened to run into a pair of criminals being pursued by the Batman. GD transformed into his dragon form, licked his lips and said “mmmmm Lunch!” The crooks promptly fainted, and people aren’t sure what irritated Batman the most…(Thathat GD scared the crooks way more than Batman did, o that GD was clearly having such a wildly fun time doing his thing).

Hero/Villain - Hero
Name - Luis A. Elizondo/Incognito
Weaknesses - No Super Powers
Personality - Determined, Focused, Serious
DCU Background -A police detective with a martial arts background in a Texas border town. Restricted by laws and policies even as a detective, he is inspired by the tales of Zorro and Gotham City’s Batman to become a vigilante hero to his community and solve crimes by any means. With only a bulletproof vest, handcuffs, taser and gun as protection, he must rely on his martial arts skills and stealth. 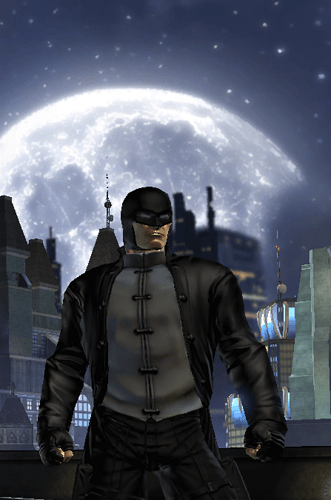 C,mon people you know have some creativity like this in you and have your own characters in mind. Maybe like a created character in a video game and use it as a template for the thread like I did.

It’s a great thread. Don’t let it get burried so quick

Guys… I LOVE it!!! The detail and creativity is AWESOME!

@Vroom I love the goofiness! So, clearly we know that he is going to escape Belle Reve.
How does he escape?

Let’s hear some more about the marshmallow mushiness and just how resourceful Marshmallow Pete can be!

@golddragon71 Surely this would have won some sort of an award… gotta be vigilant about those slippery deadlines!

Does Mitchell use his writer’s platforms to bring a little more substance to stories of dragons? Is the GD’s goal to help people believe in dragons beyond fairy tales - Does more come of “dragons” in general, like maybe a resurrection of dragons in the real world?

What exactly is meant by “redeem the Dragon Race’s honor”, and what would this look like in action?

@TX85 Nice! Reminds me of Jeff Gordon… if he were a true vigilante…and knew martial arts. haha
Does Luis have a “thing”? Like, does he have a weakness that distracts him (since his super power as a normal person seems like it may be his strong focus)?

Is there a woman lurking somewhere? Does he have family? Any guilty pleasures or secrets?

Luis can be extra aggressive and brutal towards animal abusers, child abusers and racists, which can mess up his investigations by making it personal.

He’s divorced and currently single. Close with his family but is usually a loner. He likes to be at home with his dog when not working.

oOo… How very intriguing!
Does he get ‘run your face across broken glass in a car door window’ kind of brutal and aggressive?

When provoked, yes. A bone breaker and shoots some criminals where he knows it won’t be lethal but it’ll hurt

KK, I love “marshmallow mushiness”. I can hear Ted Knight narrating an episode of the Filmation Superman show or an episode of Super Friends (as he was so wonderful at doing) using that label.

“Marshmallow Pete has escaped and threatens Metropolis with his marshmallow mushiness! Can Superman (or the Super Friends) stop him before it’s too late and Metropolis gets covered in fluff?!”

I haven’t thought of further adventures for the Marshmallow Misfit yet. I just know if he hits a grocery store, he’ll avoid anything with marshmallows.

@Vroom Hahah yesss - I can’t help but read that middle bit in his voice.

Also - Why does Pete avoid marshmallows?
Also - “How” does he escape Belle Reve?
Also - I can’t wait to hear more about the “Misadventures of the Marshmallow Misfit”.

I will wait however long it takes.

(Marshmallow Pete is my newest obsession.)

Mods, choose the best character and story. Then make an animated short on it!