Convergence Is Bad, But Everyone Should Read Convergence: Shazam

Seriously, people, this book is absolutely delightful. From the first page that sets the tone perfectly, to the fun villains, to “My name’s Tawny and I’ll do the talking!” this book is a home-run. If you won’t read it for the story, at least check it out for the beautiful art courtesy of Evan “Doc” Shaner and colorist Jordie Bellaire, who make magic on the pages. If you’re just looking for a fun time or you need something to pick you up, this book is a joy from start to finish. 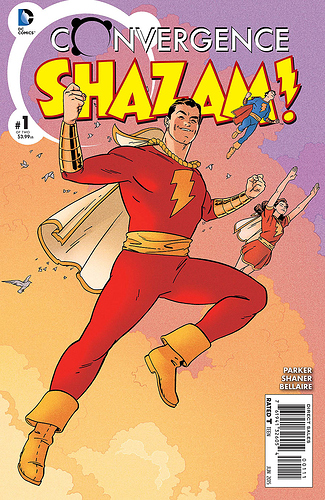 Honestly a LOT of the Convergence tie-ins are worth reading. I wouldn’t write them off.

@HubCityQuestion
I agree. I’m bringing attention to this one though because I feel like it’s the best of the bunch and I think a lot of people will right it off because of its ties to the main Convergence miniseries.

The main Convergence title was horrible. I read it in the past year and could only give you the vaguest or outlines of plot and literally can’t recall a single character.

The tire-in issues I read are just okay, but I haven’t read any recommended here.

@HubCityQuestion
I pretty much figured those were your faves.

While I liked the nostalgia that the Convergence tie-ins provided (good to revisit characters back how they were with some of the same creative teams), the problem was the repetitive nature of the plots in all of them. It was pretty much cookie-cutter with no room for anything more. That was sad. And the main series was equally as troubling. I think it could have been executed a bit better. Ah well.

I got a few of the tie-ins for various reasons (some curiosity, one by accident), and actually reviewed them on my show last year.
Superman - Really good, probably the strongest of what I bought; nice to see pre52 Supes smack around those Flashpoint chumps.
Superboy - Pretty good. The leather jacket look for Kon did hit a nostalgic nerve, but it was nice to see him learn and trust, despite himself.
New Teen Titans - I don’t think I’ve read much of Wolfman before this, but I see why his TT run is so highly regarded. Great job fleshing out these characters without being cheap, vague, or heavy with the exposition. Never felt like I had to read those old comics to understand these characters.
Titans - While I liked that Lian came back, this suffered from a lot of plotholes and convenience that surprised me from Nicieza. It had a happy ending, but how it got there is something of a head-scratcher.
Batgirl - At first, I didn’t like it that much. Then I re-read it for the review, and while not perfect, I have a greater appreciation for it. Does a lot better with Steph, Tim, and especially Cass than a certain other writer I could name, and in just two issues, too.

I never bothered with the main story.

@batwing52 I am nothing if not consistent.

I loved the way it began. Stephanie Browns ‘ fight, Harley Quinn vs Captain Carrot was great. Loved that they included the Elseworld of Justice Riders. I was all in, but it did slow down & kinda burn out slowly, compared to the way it began.