Welcome to Week 1 of Content. Today we will begin reading through The Power of Shazam #1-8. (ETA Reading Time 1:30 - 2 hrs) But there are some things to know before you start reading.

After a previous retcon by Roy Thomas and Tom Mandrake in 1987 with the Shazam! The New Beginning miniseries, Captain Marvel was again given a revised origin in the 1994 graphic novel The Power of Shazam!. Captain Marvel’s origin would also be retold in Jeff Smith’s Shazam!: The Monster Society of Evil limited series in 2007, though this origin takes place outside of DC continuity.

As The Power of Shazam! graphic novel opens, ten-year-old Billy Batson’s parents, both archeologists, are working in Egypt, excavating the tomb of Ramses II with their associate Theo Adam. Murdering the elder Batsons, Adam also kidnaps their young daughter Mary and steals a scarab necklace once attached to one of the sarcophagi in the tomb. Billy had been left behind at home in Fawcett City because of poor school grades. As in the Fawcett Comics origin story from Whiz Comics #2 (1940), Billy is abandoned by his cruel uncle Ebenezer, and becomes a paperboy to earn a living. One night, Billy meets a dark-clothed stranger outside of a subway tunnel, and follows the stranger onto a magic subway car. The subway car leads Billy to the realm of the Wizard Shazam, who assigns the boy as his successor. By speaking Shazam’s name, Billy is struck by a bolt of magic lightning and transformed into Captain Marvel, an adult superhero.

As Captain Marvel, Billy thwarts a plan by Theo Adam and his employer, the rich tycoon Doctor Sivana, to destroy the WHIZ radio building and silence a witness to Adam’s murders. Adam’s encounters with Marvel, who is the “spitting image of C.C. Batson”, along with the clues from the expedition, lead him to realize he is the reincarnation of Teth-Adam, the original heir to the power of Shazam. Upon crossing the Wizard, Teth-Adam was killed and his powers drawn into a scarab, the very same scarab that Adam stole from the tomb after killing the Batsons. Taking the scarab from Sivana’s trophy room, Adam says the Wizard’s name and is struck by magic lightning, becoming Black Adam.

Adam and Captain Marvel battle each other on the grounds of the Sivana-funded Fawcett World Fair, with Marvel winning the battle by snatching Adam’s scarab from him. Marvel takes Adam to the Wizard, who takes Adam’s voice and wipes his memory. Billy later learns that the stranger who led Billy to the Wizard was the spirit of his father, and that his sister Mary is still alive. Billy promises, as Captain Marvel, to fight injustice and evil, and also to find his missing sister. Meanwhile, Sivana has lost all of his money and possessions due to the destruction of his properties by Marvel and Adam, and swears revenge on the Captain.

Thanks for tagging along. This will continue regardless of if you guys are reading because I will be reading it.

very enjoyable! Excited to see where it goes next! I especially enjoyed this scene. The artists captured the look of the realization sinking in perfectly! Well Done! 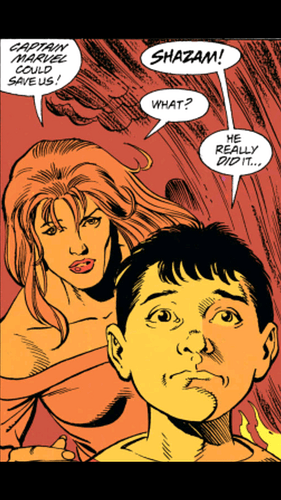 Toonatonian I agree! It changes a lot between issues and the tone with it. I think issue 1 is my favorite.

Is this graphic novel the same as the first few books of the 1994 series also called Power of Shazam!, consisting of 48 issues?

Just trying to get this straight in my mind. I have the first 20 issues of that series, but not the graphic novel. I also have the Monster Society of Evil in a HC edition, but you said that is actually a different origin.

Oops. Misspelled Payson. Apologies. What I would give for basic editing …

Issue 2 keeps the story kicking. I am really enjoying this series!

@Lobo @toonatonian, I got all the nicknames now. I’m going to try to read 3-8 today. We’ll see.