It seems to me that these days everyone knows that Batman is Bruce Wayne except Gordon. Anyone here think that Batman should reveal his identity to the good Commissioner?

Maybe, he did so in Spoiler In white knight

Yeah, though it’s not in main continuity.( sorry if I caused confusion)

I think Godon knows, but he doesn’t say anything out of respect

I think gordon has an idea of who he is, but does not feel its important, so he does not bring it up.

I believe that Batman: Year One was the first comic to suggest that Gordon probably knows who Batman is, but chooses not to pursue it to maintain plausible deniability. Writers from Jeph Loeb to Tom Taylor have run with that ever since.

I think deep down, Jim knows. In the events of the Batman Who Laughs doesn’t the Grim Knight basically recount the version of events that happen in his universe in which Gordon finds out and even arrests Wayne? Also, the DNA needed from all the dead Bruce Waynes that start dying in his Gotham must make it pretty obvious to him.

I think he knows, it’s just a sign of respect that he doesn’t “give up the game”, so to speak.

Yeah he knows but wants to forget. Like if someone told u a major spoiler & u say, I’m still gonna watch this movie pretending IDK that. 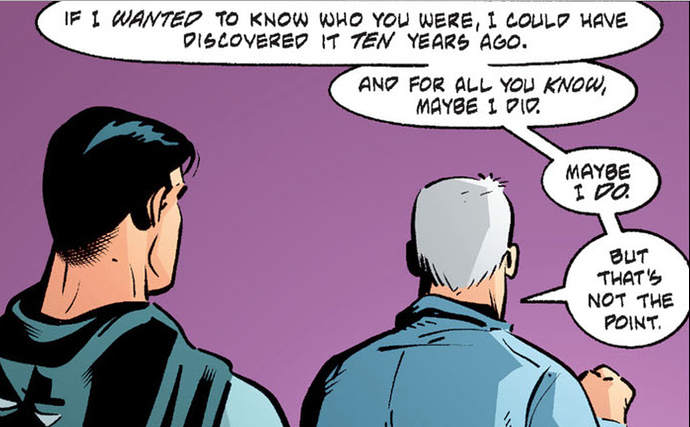 I was always under the assumption that he knew. After all he is a smart man. He just didn’t feel it mattered to tell Batman he knew.

My personal opinion is if he couldn’t figure out that Bruce Wayne and Batman are the same person, that is on him. I was watching the old Adam West series and Bruce/Batman are literally the only people/person who calls people “chum”. So much so, that this could be a drinking game. Now that I think about it, I wish I still drank. Anyway, to get back on topic. Yeah, if Gordon couldn’t figure that out he wasn’t a great detective.

Batman: Legends of the Dark Knight #125, one of my favorite issues of No Man’s Land.

If Gordon still doesn’t know that Batman is Bruce Wayne, then the only plausible explanation is that Zatanna has been routinely mind-wiping him of Batman’s identity the way she mind-wiped a whole bunch of people in Identity Crisis.

Either that, or Jim is just a really bad detective (albeit with a heart of gold), and he’s only managed to rise up to being commissioner by piggybacking off of Batman’s deductions and by simply being at the right place at the right time

I’m pretty sure the last years of pre-New 52 continuity it was eluded to that Gordon knew the bat-family’s identities. It definitely is in The Black Mirror which took place right before Flashpoint.

Doesn’t he actually know Barbara is Batgirl at some point?

…I looked it up, and it is Injustice Year 2. He also says he’s always known who Batman was.

Doesn’t he actually know Barbara is Batgirl at some point?

Yeah, as many people have pointed out, it’s been strongly hinted that Gordon knows, or at least suspects, Batman’s secret identity. He does nothing to confirm it, since he can’t act on information he doesn’t technically have proof for; it gives him plausible deniability. He may also do so as part of an effort to maintain some official distance between Batman and the GCPD, since there are potential state actor issues with Batman seeming to be working for/with the Department.