Comics the window of history!

Here is my thought on a subject no one asked but I thought I would share it anyway. When you read comic books it is a true time capsule. If your thinking jsmsiggy stay off the icky icky believe me I don’t smoke the stuff it’s very wild in my head. So here is an example the everyday life in comics are mirrored by the time they were made in the 1990s is a good example of this then you would see little mentions of the music and everything had to be extreme. Some writers even put in vague comments of the Bill Clinton scandal. I could have just said Superman dies with short hair and returns with a mullet enough said. Here is my point you read comics from the past specially before your born you will see a true view of the civil rights movement and you go farther to WW2 you see the hopeful optimism , with the unwavering support of the troops and wanting them to come home safe. Yet you can tell the quiet horror show that is felt in the writers words and the art that is drawn that the war was hell for everyone . The comics of the past even showed ugliness in some men in the way they would write and draw stereotypes of Black , Japanese, and Jewish people that segregation was real and the racism that was perpetrated without a second thought. So yes comics showed us the good, the bad, and downright ugly the world has to offer. Although comics has shown us tangible progress of how far we have come as a community , country, and world. We should read those old books to learn from our mistakes and learn from the lessons of the tangible history. So I encourage you to look through all the eras of comics history like looking through an old family photo album share the history so we can show the world we will get through the problems of today.

A little side note I am putting a picture of a cover of the most famous Comic character manhandling Hitler and a Nazi because that’s just awesome! 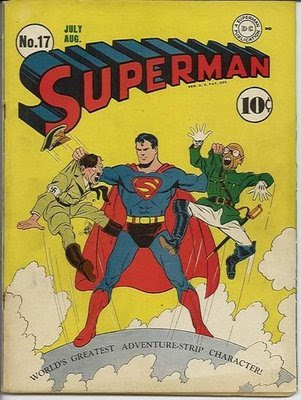