DC Universe Infinite is the last app I close each night before I go to bed and it’s the first app I open once I’ve awoken and gotten a cup of coffee. I know I’m addicted to comics and I know y’all know what I’m going through. It’s nice to say it out loud, to be among friends and to have a group that supports me - even if y’all are a bunch of enablers.

In the same boat here. Comics are my go-to for good moods, bad moods, sad moods, and everything in between. I always tell myself “just one more issue”, and 5 issues later I’m absolutely enthralled and “need” to keep going, sleep be damned! And there is always another comic to read; I’ll finish a reading order I’m on, then see a new issue of something and think “well now I have to go read that series!”. Granted I’m a “completionist” but I get so excited about reading a new story, finding a new character or creator, then branch off from there. DC Universe Infinite is the app I dreamed of since I started reading comics and couldn’t be happier it exists. And I get to hear about other loving comics like yourself and that gets me pumped to read even more!

You’re not alone, but as you said, we will definitely enable you so be prepared!

Hello Felix and others. I’m Omni and I’ve decided to enroll myself in Comicaholics Anonymous as soon as possible because I can see myself falling down an expensive rabbithole.

I originally got DC Universe Infinite as a way to save money overall and read as many comics as I like, but then I downloaded an app to log my collection of physical comics… that’s where it all went south. Now it recommends new series issues to read that drop each week that I get excited for and now hunger to buy. Now, a couple issues here and there is no problem, but now I see myself wanting to spend upwards or a 60 dollars a month just on all the new series it recommended.

That’s why I’m here, I beg of you all to give me the strength to wait for them to come here or drop as TPBs so I can save money… thank you for your time.

Just inherit billions. It worked for me.

I’ll write that down.

I feel you, Omnilad. It’s not easy to turn down the latest books at your local comic shop.

What I’ve done, to keep costs down, is the following:

Now’s a good time to be on DCUI because Future State is still arriving and then Infinite Frontier begins and all the books essentially relaunch or start up again.

Welcome, all of you, to Comicaholics Anonymous and thanks for being such a supportive group of enablers.

Hi everyone - Felix again. Need to share because I feel myself giving in to the Comics Addiction again tonight.

So I set off to get my fix and start at the beginning only to realize that none of those books are on DC Universe Infinite. I started to panic. The sweat immediately formed on my furrowed brow, I bit my bottom lip so hard I thought it would bleed, I just kept saying “No, no, no, no, NO!” as I scrolled and searched for every combination I could think of hoping they would somehow appear. When I realized none of them were available on here, that none of the comic shops were open at that hour and that even if they were I couldn’t afford to run out and buy them all I started to really panic. What was I going to do?!? DAMN THIS COMIC ADDICTION!

Then I remembered my local library. I logged on, signed in to my account and put ‘American Vampire’ Volumes 1-8 on hold. I’ll pick them up on Monday morning and start reading them in order for free. The crisis had been averted and my breathing returned to normal. I hadn’t even realized how much I was gripping the left arm of my chair until my hand relaxed as I sat back and sighed with relief.

I know you’ve all been there and this is a safe place to discuss my comic addiction. I may have overdramatized that a little, or a lot, but since we’re all Comicaholics you know what I went through. Thanks for listening. Stay strong and take it one panel at a time.

I fell off the wagon today. Went to the local comic shop and lied to myself that I would “just pick up the books in my pull folder”. I knew it was a lie but I tell myself that every week and every week I half-heartedly believe it and drive to the shop thinking it’ll be a quick, cheap stop.

As soon as I walked in I saw the box of 50% off books and knew I was in trouble. Before I even thought about it I was already flipping through the titles in the first box and finding ones that looked good. I ended up getting ‘Death Bed’ - a Vertigo title from 2018. I have never heard of it but that doesn’t matter when you’re an addict. Finding a new book/title that looks cool and that you haven’t tried before just makes the thrill that much stronger.

Before I left I found a book called ‘Miss - Better Living Through Crime’ and pulled that as well. This one caught my eye purely because my favorite writer, Ed Brubaker, wrote the foreword and recommended it. Good enough for me! SOLD!

I then walked up to the counter to get my pull folder - three titles this week, Harley Quinn #6, Superman: Son of Kal-El #2 and Wonder Woman #777; ‘The Suicide Squad’ variant covers of each one - and while I was waiting for my total I foolishly let my eyes wander. They landed on a beautiful site that I had to have - ‘The New 52 10th Anniversary Deluxe Edition’. That is going to be 400 pages of nostalgia and greatness for me. I can’t wait to drink it all in through my optical nerves.

So what should have been three books and out the door became three books, two collected editions and one 400 page Anniversary Edition. My total? I’d rather not think about that. Next week this is not happening. No. Next week I’m just going to go in there and buy whatever is in my pull folder. That’s it.

Hi @FelixLeiter I saw you went to your library for American Vampire. Have you looked into Hoopla? This is a free service through your library for digital books. I haven’t used it as I have a late fee and when I tried to pay it the lady said to come back the next weekend. Needless to say, that next weekend never came. Still, I find it weird that I wasn’t able to pay my late fee.

Also, I noticed that you picked up Miss. Are you familiar with Humble Bundle or Groupees? These are sites often have digital comic bundles for sale. (None at the current moment) I have yet to see a DC bundle but I have purchased many Image and other indie comic bundles over the years. You can choose the price or tier you want. Many of these start at like $1-$3 and you get a few books or you can get the whole bundle for $25 or cheaper. I have gotten as many as a few 100 books this way (they had a Witchblade bundle that had every TPB and filled in the single issues that weren’t collected along with other Top Cow greatness)

I buy comics and play seventy rounds of golf a year. Thank goodness I picked two hobbies more addictive and costly than cocaine. 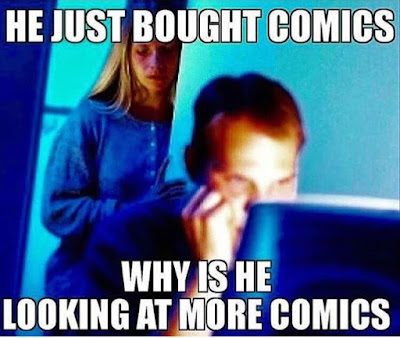 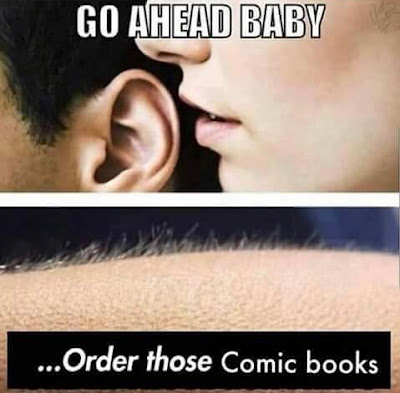 I do have Hoopla, yes, but if I have the option I prefer physical comics so if the books aren’t on here and I need to get them from the library I request the books themselves. I like the tangibility of it, being able to relax on the couch and read without the glare of the phone or getting interrupted by a text or a notification.

That’s very odd that you weren’t able to pay your late fee - in this day and age there’s no way to pay it over the phone, digitally or even via check? Come on now. That’s poor business by your library. Hopefully you get that cleared up soon.

I am not familiar with Humble Bumble or Groupees at all, no. I will have to check that out and see what I can find - thanks for the heads up…you enabler.

Would love to play a round of golf with you someday while we talk comics. Two of my favorite hobbies as well - thinking about putting in a practice cage in my backyard to work on the swing whenever I want. Basically a 10x10x10 frame with very fine mesh on all sides but one that I could put a practice mat in and hit shots into a rubber backstop like you’d see at a batting cage. Would be good exercise, good practice and a good release of stress!

I hear you, @FelixLeiter. I’m a comics addict too!

Welcome, @mercurie80. You’re in the right place. Keep coming back. One day at a time.

Had an incident today. Have a bonus coming in an upcoming paycheck so thought I’d treat myself to something nice. I look at my wishlist and do some searching and find that James Tynion’s Detective Comics run in an omnibus is on sale. It’s a bit more than I wanted to spend from this bonus, as I have many things to fix up around the house, but I knew I worked hard for it and would be an amazing piece to add to the collection. The purchase has been made, and I sink deeper into this hole of comics on my shelves that I won’t touch for years. It’s the best worst thing haha

Congrats on the bonus and good on ya for treating yourself. That omnibus looks like a beauty addition to any collection and will look good on your shelf, even if it never gets opened.

I appreciate you coming forward with your incident and want to make sure you know you’re in a safe place. No judgement here. We’ve all been there and we get it. Keep coming back, man. One panel at a time.

I bought every issue of Countdown to Final Crisis the week they came out.

Where are you, Captain Yesterday? We need to get a sponsor to you right away for an intervention! Don’t give up, you’re not alone!