In case you’re wondering, this is my “I’m gonna sneak this in before they close this up” post. I think we’re all aware of the upcoming renovations being made to the Community, so I don’t have to recap. I will say this though: sometimes you come across something so good that you have to let people know, even as the lights are being turned off.

That thing is the book I’m going to review: Tales of the Green Lantern Annual #3. This issue, which dropped in 1987, wasn’t necessarily connected to the then-new ‘status quo’ for the main Green Lantern Corps title - which began the past year in 1986 with issue #206 - but that’s no knock against the annual, particularly not for the stories it contains.

Much like the GLC annuals that came before, this book is a collection of stories written and drawn by some of the biggest, most recognizable names in all of comics. Some readers might be surprised (like I was) at some of the name that pop up in this book (wait, John Byrne wrote AND drew a GL story?).

We’ll get to those stories in a bit but first, a disclaimer: No, this book can’t be found on DC Universe unfortunately. You can, however, go to a local comics shop and search for a single-issue copy (like I did), and DC recently reprinted the stories in the annual in trade format (look for The Green Lantern Corps Vol. 1: Beware Their Power).

Now, on to these stories. The first thing to note about this book might be of interest to fans who want to see more of the non-human Lanterns: this book is exactly what you’re looking for. At no point do Hal Jordan, John Stewart, Guy Gardner or any other human Lanterns show up in these stories. Heck, with the (questionable) exception of one story, we don’t set foot on earth AT ALL in this book. Alien characters, planets, civilizations, and environments are all front and center, almost quite literally as the cover is a pinup of almost all the alien Lanterns we see in the book.

Because the book puts its lenses entirely on these characters, away from whatever’s happening the human Lanterns, it clearly gives the writers (and artists) a bigger creative licence to to tell different types of Green Lantern stories. Stories that you typically wouldn’t get in a regular, monthly GL book.

Okay, I’m done rambling. Let’s get to the individual stories, which I will review one by one before giving my closing statement on the book and whether you should check it out.

We begin with a great-looking framing sequence, drawn by the legendary Joe Staton. The subject of the framing sequence is a character in one of these stories, but I’ll save that for later.

We turn the next page to go into our first story (and one of my favorites): IN BLACKEST NIGHT. Written by Alan Moore with pencils by Bill Willingham and inks by Terry Austin (Gene D’Angelo does colors for all but one of these tales), this story introduces to us a more obscure piece of the GL mythology: The F-Sharp Bell Lantern.

In this tale, Katma Tui (a familiar face to GL fans) is sent to Space Sector 0911 to appoint a Green Lantern to protect it, but only finds Rot Lop Fan, a being who resides in the Obsidian Deeps, basically a black and lightless void. As a result, he is unable to fathom the concept of light or color, two things that are important signatures of the Green Lantern. So Katma resorts to something else, a new concept of a Green Lantern fit for someone who can’t see, but can hear.

“In Loudest Din, or Hush Profound, My Ears Catch Evil’s Slightest Sound, Let Those Who Toll Out Evil’s Knell, Beware My Power: THE F-SHARP BELL!”

The story sounds pretty simple on the surface, but that simplicity masks an exceptionally well-told and gorgeously-rendered slice of smart Sci-fi comics. The F-Sharp Bell Lantern is a really cool concept, one that was introduced to me via issue 2 of Grant Morrison’s current run on Green Lantern, so it was cool to this concept as it was originally formed by a master in his prime (Moore) and an artist at the top of his game (Willingham). It ends with great little sinister ‘joke’ from one of the Guardians, being the only story here that portrays their intentions as maybe less than noble.

Onto the second story and my third favorite in the book: GUARDIAN ANGEL! Written by Mike Carlin with pencils by Paris Cullens (co-creator of Blue Devil) with inks by Craig Russell (no idea if that’s P. Craig Russell).

This one is also pretty simple, if not a little more so: Shingo-Wol, a Green Lantern originally sent to stop a civil-war on an unnamed ‘yellow’ alien planet, only to have both warring factions unite against him as he and his ring fight literally to their deaths (the ring ‘expires’ at the end of the story).

The total opposite of “In Blackest Night”, “Guardian Angel” is a furiously-paced, six-page burst of action wrapped in tragic circumstance as you’re basically watching the final moments in the life of a Green Lantern. It’s solidly-written with great visual panache provided by Cullens and Russell, with a really cool psychological storytelling element accentuated by a creative use of panel borders to differentiate the battle in Shingo’s head with the march to death’s door happening in reality.

This next story, WORSHIP, comes to us from writer Kurt Busiek with pencils by Jose Luis Garcia-lopez and inks by Joe Rubinstein. Here, we are introduced to the planet of Veltre, where a Green Lantern (D’an) is worshiped by his people as a god-like figure, believing him to be the ONLY Green Lantern…until three Lanterns recruit him for a mission to save his planet, putting his people’s faith (and his own) into question.

The one real knock I have against this story is that the ‘save the planet’ subplot is an interesting wrinkle (It’s even referred to intriguingly as “The Krypton Problem”), but unfortunately it goes nowhere and that’s largely because a story like that should be it’s own story and not a plot device. But other than that, what we get with this is a story about confronting and owning the truth about yourself, even if it’s the hardest thing to do. A great ‘moral’ story without being very preachy (which I’m sure was hard to do in 1987), with Garcia-Lopez’s usual comics artistry gracing every panel.

This next one is probably the darkest one of the bunch, but nonetheless providing another solid read. A SENSE OF OBLIGATION hails from writer Richard Bruning and artist Kevin Nowlan and tales the story of a female Green Lantern (Ahtier), who is pregnant with a child as she fights to protect a planet from a race of invaders known as the Coltans. When the ship she’s keeping at bay explodes, she’s crash lands on the planet she was protecting and gives birth shortly thereafter. Sensing that Ahtier’s death is imminent, the ring searches for a new bearer and finds one in a woman who’s husband perished in the debris shower caused by the explosion.

As you might tell, this one is another ‘morale’ story, one that actually does an even better job at selling its message than the last story. Again, it’s a dark tale, but it’s one punctuated by a hopeful, heroic lesson.

“All right…If being a Green Lantern means I must learn to care for life in all its forms…Then I may as well start small.”

The art is a bit on the rough side, but it does help sell the drama and emotion of a story with great writing. It’s a tight little character piece that, like the first and second stories, uses its six pages to great effect.

This next one…is perhaps the only real stinker in here, and I hate to say that. YELLOW FEVER, from writer Joey Cavalieri with pencils by Greg Brooks and inks by Bruce Patterson, is an attempt at a wordless Looney Tunes-style story (and not a very good one). Here’s the story: random Green Lantern gets killed by a blast of yellow light(?), falls to the ground and dies, then gets his ring taken from him by a chucklehead in Wild West clothing who tries it on, doesn’t like it and throws the ring away.

Lousy set-up? Check. Nonexistent structure? Check. Characters you don’t have a reason to care about? Check. Non-inspired use of the medium? Check, check, and check.

The final story in this book is quite the doozy. If “In Blackest Night” wasn’t in here, this would have my vote for the best story in the entire issue. MANY ARE CALLED… is a story from the mighty John Byrne (with inks by Kurt Schaffenberger). Here, we are introduced to a bird-like alien Green Lantern who has served the Corps for 3,000 years and is suddenly called upon to receive the rarest of things for a GL: retirement.

So he is sent to ‘retire’ on a planet somewhere in Valstan C5 (a planet in the Globular Cluster) and anoint a new ring bearer. But what happens when your new ring-bearer is a…hive intelligence?

The result, for me as a reader, was probably one of the best Green Lantern stories I have read in a long time. Byrne’s dynamic artwork is a sight to behold has he renders his alien subject (and the equally alien world he’s sent to) with a fluidity not seen in most superhero stories at the time. These qualities are also reflective in his writing, as I had a blast seeing the main character figure out what this being was (and what he had to do). The story (and the book) ends with this character ‘sacrificing’ himself and his ring’s power battery to the hive intelligence to create a billion Green Lanterns out of the puffball creatures that inhabit the planet (I love comics!).

One of those puffball GLs is the character we see at the end of the framing sequence, as it closes The Book of Oa.

While YMMV on the quality of these stories as it pertains to certain readers, I found in Tales of the Green Lantern Corps Annual #3 a largely enjoyable set of off-kilter Green Lantern stories that should have major appeal for readers looking for something different from the Green Lantern mythos. If I had to give it a rating: 9.0/10!

(To any moderator who reads this, I’m terribly sorry about this giant tome of a review I wrote, all in the hopes of getting a single book to be on the DC Universe platform. If it helps you feel any better, my next post on October 24 will be a one-sentence soliloquy of what a nice man Jason Todd is :D) 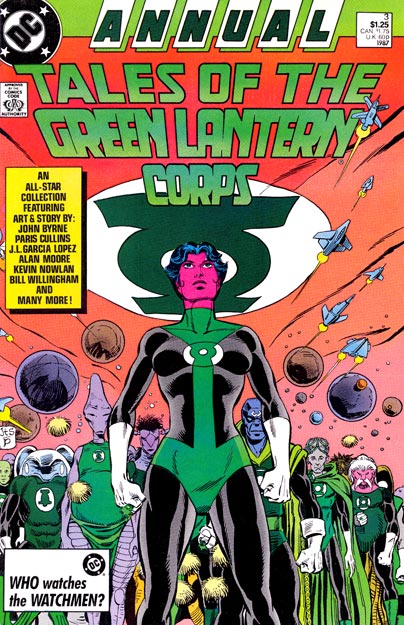 I am also a big fan of them telling stories focused on the alien Green Lanterns. I know that some of these are still available in collections, like their Alan Moore omnibus. So they may have already scanned it. Which would help the odds of it being added.