Thank you, @weiserguard.21185! I logged this request already from your post on another thread, but I’ll reiterate here that your feedback has been noted for our team.

Thank you @fb_digital.comics.fans.group and @RexRebel for the Starman Compendium request! I’ve noted both of y’all’s support for this to our list.

Thank you. This is the sort of thing that would require little effort since it’s already digitally prepared, so anything it sells is pure revenue. Marvel’s doing it. Why not DC. Especially since it sounds like the new owners are trying to find extra revenue streams. Tally ho, get on it.

I have a theory, I do apologize if this been answer before and sometimes I do forget.
Just now I was reading a old Action Comics where Luthor gets a power of strength.
As I was reading, I was thinking, wondering if people at DC Comics are adding missing comic by how many people are reading them.
The Batman Adventures probably get less read, if it does, why bother adding more missing comics? If Action Comics get more read, they’ll probably add more missing comic.
It’s a interesting thought. Whether I’m right or wrong, I do appreciate their hard work of bringing old and new comics to DC Universe Infinite. I can only hope all the comics I’ve mention many times in the past, will get a chance to be added soon.

Unfortunately, the moderation team is not at all involved in the decision-making process for the digitization of archived comics, so I’m not able to provide any insight on that matter. We work to relay the feedback received here to the team directly responsible for the content released on the platform so that they may take that input into consideration for future digitization projects.

Nevertheless, we appreciate your kind words towards our content team as they surely deserve it!

The Demon #13-16 and the conclusion to the Fourth World Saga, Hunger Dogs.

All his Charlton titles.

These men are gods among men, you spit in faces of the comic gods by not prioritizing the works of these comic gods before all else. SHAME!

I am not kidding, it is a disgrace Kirby and Ditko are not fully represented.

Thank you for these requests, @TurtlePower. I have them noted on the list for you!

Be that as it may, you apparently have their ear, so please exercise judgment and be advocates.

Prioritize items that are genuine omissions. For example, the Ostrander Spectre Annual. Release that, you complete a well-liked run. The Human Target Final Cut GN - that would complete a run and might help sell other Human Target comics, especially since there’s a new series and one of the artists from the Milligan run drew Paper Girls. Alan Moore’s Top Ten 1959. In case you hadn’t heard, people still love Alan Moore comics. Ditto for League of Extraordinary Gentlemen The Black Dossier.

Bring up the business case for digital-exclusive collections. Make it easy for libraries and customers to buy product. So what if there wasn’t a print collection. If you have the digital files, make one. Why not create digital-exclusive compendiums? The files are there, or at least mostly there, so put in that little bit of extra effort.

Then again, someone can ask to put up more issues of Extreme Justice too.

I agree that some alignment with new stories, movie, and shows would be useful and maybe a good business plan. (as an aside, I know someone who is enjoying the Sandman show but has no desire to read the comics because “I’ve already got the story”)

Also, as a completist I find single missing issues annoying (Superboy 100, JLQ 3) At least Wasteland 6 got put up quietly.

However, I ask for the odd comics because I want to read them. I want complete Action comics so I can read Zatara not to read Superman which is available elsewhere. To be blunt, I can go to my local Barnes and Noble and read the Black Dossier today and did a while back. I can’t do the same for Rex the Wonderdog. I get some people may have no desire to read what I want but similarly some of the more popular comics have little interest to me. (I will eventually read anything put on DCUI though).

The Captain Carrot issues are a good example. When someone asked if there was really interest in the series, a list of six or so calls for the series was posted. I’m sure some people thought this was a funny animal comic that didn’t last 2 years back in the 80’s, while others (like me) thought finally, my favorite comic will be easily accessible.

Finally, while my requests are often for obscure things, I may be the only person who lets them know that Lords of the Ultra-Realm would be appreciated, but there are probably 10 requests for the missing silver age Batman, Superman and Wonder Woman comics, so I feel less need to add another.

This is just an attempt to show the other side of the issue and not meant to be an argument. I appologize if it came across as one.

At least Wasteland 6 got put up quietly.

Ah, did it? I gave up hope on this a long time ago. Nice to see that it finally turned up: 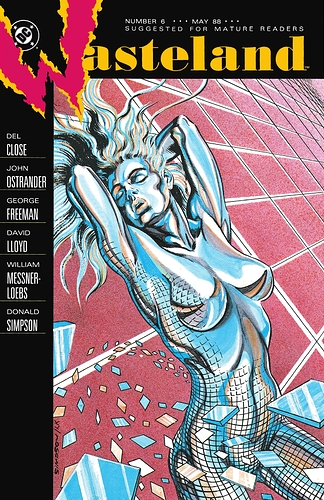 Thanks for the heads-up on this!

I would like the entire run of Mad Magazine, but I’ll settle for the original comic run for starters, Mad 1-23.

Thanks for the request @HubCityExclamation! I have got this logged for you.

I mean, you’re basically saying “digitize everything.” Which is a sentiment I agree with, but I do think they can be more intelligent about how they go about doing it.