Definitely love the bump to five backlist titles this week! Please pass along our regards to everyone involved in getting those numbers up.

Will do! I’m glad to hear that.

Also, I think the title of this thread is a little confusing. Idk if these books exist digitally, I just want them on DCUI. I thought I would need to find a different thread to request to add books specifically to DCUI

Thank you @JayJayden for the request! I’ve added this to the list for you.

Regarding the title, this refers to how our team often has to digitize the comics from our archive. However, we’ll see if we can find something better suiting.

I think the title of this thread is a little confusing.

As the creator of the thread, I’ll elaborate on its title:

The point of the thread is for members to submit requests of comics that currently only exist in print that they would also like to see in digital, hence the “print to digital request” portion of the title.

There you have it. Nice and simple.

If something you want in digital isn’t yet available that way, then you’re welcome to request it here. Requests don’t guarantee anything, but they do let The Powers That Be on DC’s digitization team (which is completely separate from the folks that run DCUI, as well as the moderator team of the community) know what you’re interested in seeing. Speak up, and often, with your requests.

“Basically.” as Ash Williams would say.

I also stated that helpful folks would assist, and you and that thread are indeed VERY helpful, @KookieSuperApe.

I would like to request the JSA annual and Secret Files that go with the 1999-2006 series or are they not digitized?

Would love to get Worlds Collide 1 – the Milestone/Superman Family teamup from 1994 – onto the service. Then you could put all 14 chapters into a Storyline to make it easy to follow!

I’m listing the chapters below to make it easy. Worlds Collide #1 is the only missing chapter.

Good deal! Thanks for your additional vote for this title, I’ve got it added!

I’ll toss a coin of support into the “Would like to see Worlds Collide #1 in digital”-labeled bucket. 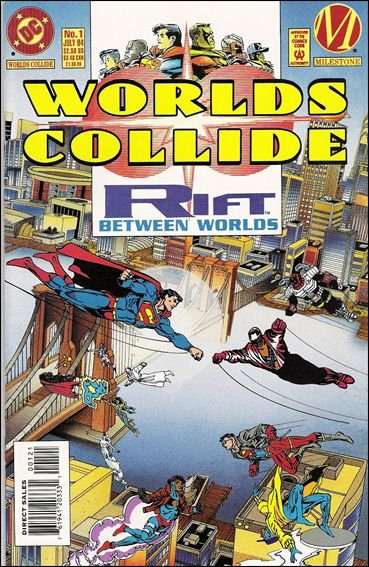 Thanks for the coin, consider it accepted

I’m backing this. I had every issue in that crossover except World’s Collide, and it’d be nice to be able to, after 28 years, read the entire thing.

I remain confused why DC digital is so unwilling to take chances. Marvel has just stared releasing digital omnibi. DC isn’t even close to that.

DC has tons of comics that have been cleaned up for omnibi, but they won’t release them. Makes no sense to me. Graphic novels like Human Target Final Cut and Top 10 49ers. Why of course we can’t release those, no one would pay for a whole book at once, that’s crazy. Except that they do all the time. A collection of material never collected in print but is available digitally? We can’t do that? Except of course, DC could, and it would only take 10 minutes to put together a digital-exclusive collection. But then, DC isn’t even good about completing existing collected editions, which strikes me as a bit short-sighted, if not non-sighted. Digital collections are the types of things they can get into libraries, a different market than the Direct Market. So why wouldn’t DC want to spend a couple more hours and improve the digital comic ecosystem. It makes no sense.

Also, Spectre Annual by Ostrander please, again, it’s the only part of that series that isn’t available digitally. Any good reason why?

I second Tangent Superman’s Reign 1-12
(Actually, I second everything, but this one I would really like to read.)

Thank you for the requests and seconds, @SaintBrodie, @Monochron, and @idle453.87595! I’ve got these added to our list for the team.

Additionally, welcome to the community @Monochron!

Thank you for the requests and seconds, @HubCityQuestion

I knew I was going to mix them up when pinging at some point.